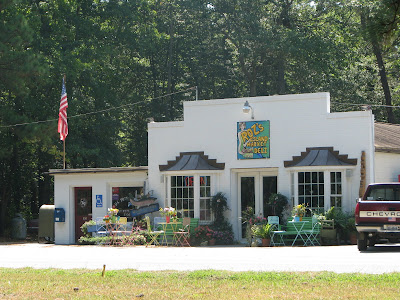 Above is a picture of the Island Market, formerly Scrooch's Market, on Gwynn's Island. On the left is the Grimstead Post Office. There are two post offices on this tiny island and that strikes me as odd. They aren't located more than a mile or two apart. Speaking of odd, does anyone find the name Scrooch odd? 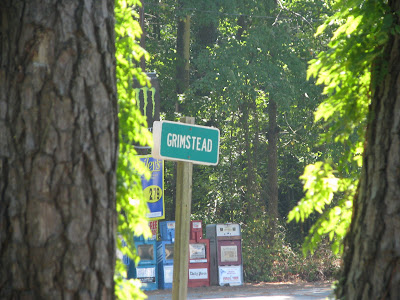 Today I drove the Gwynn's Island Meals on Wheels route. I covered three areas, the Glebe, Redart (that's Trader backwards, by the way), and the island. There were also three trends I noticed among the people I visited: death, dementia and loneliness.

Delivering food to these folks is so much more than just bringing them something to eat. They look forward to having someone, even if it is a frazzled, tired, forgetful, scatter-brained 43-year-old, check in on them, talk to them, and help them out with anything that needs doing.

Back to the three trends.

Death. It's no secret that these folks are waiting to die, as blunt as that may sound. They are unable to leave their homes without assistance, and most are in varying degrees of physical--and in some cases mental--decline.

The first lady I visited down the Glebe will not be alive the next time I run this route. I'm no doctor, but anybody could see that her frail body just will not last much longer. She lies all alone in her bed with the TV on in the adjacent room.It broke my heart to see how much she has deteriorated since the last time I saw her, but on the other hand she will be able to leave this life peacefully, in her own home, rather than in some sterile nursing home or hospital. She is aware of her surroundings, and they are familiar to her. Her last moments will be in a comfortable environment.

Dementia. Another lady suffers from many physical ailments but is also losing her mental faculties, asking the same questions over and over again, and saying things that are incoherent. Her home health care worker met me at the door but not until after I heard a good dose of the patient's ranting and raving. The poor person helping her looked frazzled. I understood completely. I identify with frazzled. I also identify with demented. It so happens I am fluent in incoherent.

Loneliness. The last lady I visited met me at the door as if I were an overdue dinner guest or a long-awaited family member. After a brief introduction, where it was determined that she didn't know my family but did know my best friend (in Mathews, when you meet someone, you must talk until you have identified a person you both know, then you can move on to the next topic), I set the food on her table and started to make idle chit-chat since it was my last stop, and she seemed to want to talk.

About 3 minutes into our exchange, imagine my surprise when she proceeded to lift up her dress. Not exactly sure what she was going to do next, I stood there, wide-eyed, glancing nervously from the ceramic chickens on her kitchen shelf to the wooden fork and spoon on her wall. There was really nothing I could have done to prepare myself for what she was about to show me. No, she did not pull her plastic britches down. Instead, she showed me what she called her hernia, which looked like this:

Jeeminy Christmas, I've never in my entire life seen anything like what was coming out of this woman's mid-section! It looked like she was pregnant with an alien life form, and she was approximately 3 months overdue.

After this, of course we were best friends. She had broken the ice by pulling up her dress and showing me every possible thing she had--and then some. We had a very nice conversation and she showed me around her impeccably clean house. It wasn't until the end of our visit that she mentioned her age: 94. She lives by herself, is fully functioning--alien pregnancy and hernia notwithstanding--and is as sharp as a tack. She said her son wanted her to move to Florida, but she didn't want to die in some strange place in some strange state.

She wants to die right here in Mathews, where she has lived her entire life.

And she will.
Posted by Chesapeake Bay Woman at 1:08 PM

Wow, there really is nothing one can say when you are "gifted" with the site of something like that.

I think it's amazing that you are part of such an awesome organization like Meals on Wheels. I don't know what some folks around here would do, especially in the winter, without that program and it's wonderful volunteers like yourself.

Thank you for not only sharing so much of your home with us, but your beautiful compassion spirit of community as well.

Old people are fun, aren't they?! Remember the last time that we went to the nursing home in Mathews and that lady came up to me in her wheelchair and told me, "I don't belong here. I go to the church across the way, not here." She said it in almost a whisper, as if not to offend the others. She was quite convincing.....

You get to have all the fun. Seriously, this is one of the kindest things we can do for our elders. Good for you. I hope I get a meals-on-wheels person like you when the time comes.

What a caring and giving thing you are doing delivering the Meals on Wheels.
I can also tell that you are giving much more than just meals.
Kudos to you Chesapeake Bay Woman, you are a treasure.

I just love me some crazy old people! Those folks can relate to me, and that ain't sayin much is it? God bless you for doing this.

...Just when I can't think of one more reason to justify driving all the way to Mathews and meet you in person you give me another one... ;o)

You are AWESOME!! Meals on Wheels is such an important program. Those folks are totally dependent on volunteers like you.

My Dad & his wife both run local Agencies on Aging. I KNOW they appreciate you:) You know the ones!

You are an angel delivering Meals on Wheels. I'm sure these folks enjoyed your visit and look forward to more.

Thank you from all those home bound folks for what you do. My mom got Meals on Wheels for the last 6 months of her life...while she didn't really like the food she enjoyed the visits....especially when the folks brought along their grandchildren to help deliver.

My grandmother lived on the same farm her entire life...she passed away at 94....without an alien though.

Oh my goodness. I love that you deliver meals on wheels. I love that you were kind to 3 people today. I love that you looked at the alien baby hernia with love! You are a wonderful person. I thank you for showing compassion to these people. By your good example I am reminded of the great need others have for love.

You all are too kind. I love every minute of the time I spend with these gems and get as much--or possibly more--out of the visits than they do.

If you have any spare time, visit your nursing homes or your senior centers. Try out the Meals on Wheels thing. It takes very little time (usually only an hour a month, less if you're a substitute driver like I am), and is so entertaining and meaningful.

The elderly are a wealth of information and always want to share what they know with others.

This is such a lovely post. I Stumbled it. Someone who knows your area -- sisters? Living on the Spit? -- could maybe print a copy to share with the other Meals on Wheels people. It is truly inspiring.

CBW,
Super cool of you to deliver meals on wheels, my kids say "super cool" so I hope thats ok, alright they don't say super cool, I do. Anyway, believe or not. My uncle had a 40 pound alien hernia too! He wouldn't go to the doctor until it was too late to operate. He only lived to be 92. Visiting the elderly is very rewarding. Hey I just heard Julia Roberts say super cool on ET. Wow.

I am sad, but not surprised, to say that the lady I said I wouldn't see on my next run passed away this week. She was 90 years old.

Even as frail and sickly as she was, she looked about 15 years younger, bless her soul.

I'm glad she has found peace at long last, and that her suffering is finally over. Although I only had the pleasure of interacting with her two times, I greatly admired her independence and self-sufficiency even though she was ailing.