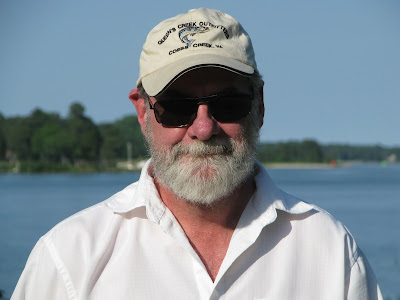 This is Jim from Hallieford, who saved me from myself and dial-up internet.

When even Mother Nature could not believe that I was using dial-up internet, she orchestrated a thunderstorm and directed a lightning bolt to take out any hope of continuing on in blind obsolescence.

Mother Nature was as tired as everyone else of hearing Chesapeake Bay Woman complain about her computer, her internet connection, and the fact that it took 15-20 minutes to upload one photo.

Mother Nature also knew that Chesapeake Bay Woman was afraid of change and needed a cattle prod gentle nudge to move in the right direction, which was basically towards the current century.

What Mother Nature did not realize, however, is they don't make a cattle prod big enough to force change upon CBW there were some compelling reasons to stick with dial-up as long as I did:

- Although cable is available in Mathews on my very lane, my house is located just far enough from the road that the cable folks would not run a line to it. So although my neighbors across the street can receive cable TV and internet (if they wanted), that's not an option for me.

- Verizon sounded like a nice alternative until I learned that people right across the field from us could not receive a steady signal although their cell phones worked just fine. I called the local Verizon folks up and the lady confirmed that if we had trouble with the cell phone signal, the internet probably would be spotty as well. Given that I have to climb a telephone pole go outside to receive a cell phone call, I figured Verizon was not for me just yet.

-Satellite internet was an option, but I was afraid of the initial expense to set it all up, which is significant.

So after pondering these options--all of which require either a contract, an arm and a leg, a maximum usage cap, and/or a first-born child, I did what any intelligent consumer would do: I asked my 15-year-old son to do some research.

What he came up with was this: "Mom, I don't know about all this because of the contracts, our location, the usage caps, the equipment fees and that whole first-born child thing which hits close to home. If worse comes to worst, let's do satellite."

In the meantime, Jim from Hallieford contacted me and said very confidently that he could fix the whole internet problem.

Here's how the initial meeting went:

Jim from Hallieford: Hi. I can have you up and running in no time flat.

CBW: I don't know.. but sure, come on over and test things out.

Jim: The signal is strong. You're good to go.

CBW: I don't know....so what about the contracts, the usage cap, the equipment fees and the first-born child thing?

Jim: No contract. Minimal charge. Personalized service. You can keep your first-born. It's all good. There. You're up and running.

Jim: Here, until your router arrives, use mine. It's all good.

At this juncture, a choir of angels sang Alleluia, and the Chesapeake Bay Family officially stepped into the current century.

Here's Jim from Hallieford holding everything needed to sign me up for high-speed internet: a patient smile, a signal tester and a pie plate. And no contract. (Pie plates are a very high-tech method of ascertaining signal strength in Mathews, in case you didn't know.) 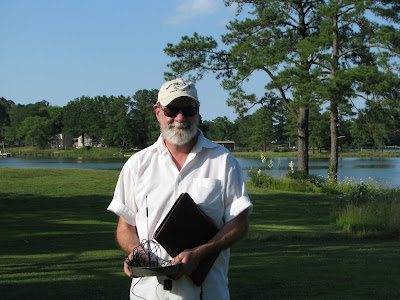 Thank you, Jim from Hallieford, for saving my life the day.

p.s. Whereas I used to spend my weekends pre-loading photos because each one took 20 minutes, I can now load photos in the blink of an eye. Plus, I get to keep my first-born child. It's absolutely amazing.
Posted by Chesapeake Bay Woman at 12:01 AM

Ah, the joys of high speed internet! I think Mr. Jim is going to be getting some new customers because of you CBW! :-)

If-when-if-when-if I ever move to Mathews I am SO calling Jim from Hallieford. In the meantime, methinks you should make his business a nice blog button as a thankyou. I totally get the difficulty of signal strength and stuff. High fives to you, to Jim, and to CBSon, who will not be shuffled off to Hallieford as chattel. : )

Whew...glad you got to keep the first born! That was a close shave! Not someone you are going to be able to do without in the future, the way technology is moving.

one minor correction.. no one in Mathews has Cable internet.. desired or not our cable lines won't support it.. booooo nor do we have DVRs via cable for the same reason.

second minor thing.. look at nice Mr Jim's map.. see that teeny tiny speck of Mathews down there at the bottom where the circles don't cover.. guess where I live..

I am however really glad you are back.

I'm so glad you're back! I missed you!

Three cheers for Jim from Halliford! I'm glad you're up and running. I agree - a button on your sidebar for that angel of a man is a great idea.

I think the button is a great idea too. If I can figure out how in the world to do it, I will.

We had another minor technical glitch this morning most likely attributable to the CBW Gremlin which resides in her home and follows her wherever she goes. Jim came over right away and took care of it.

AM-Thank you for that clarification on the cable thing. When they told me I couldn't even get cable for my television I was flabbergasted. I mean if I can string four or six extension cords from my house to the fence at Christmas time, I'd think they could run some cable, but what do I know.

Hooray! Three cheers for Jim from Hallieford!! Did he use his magic powers to get your high speed internet going? Use words like hokus pokus or shazaam?
He should be an honored guest at the BlogFest:)

CBW, I remember when cable came to Mathews back in 87,88? A lady was going door to door signing people up. I was listening to my cassette tape from LaBamba the movie (!!!) and my mom was hanging her new draperies she'd gotten that weekend from Montgomery Wards (!!!)

wow Monkey-Wards, how far back does that go LOL

Kate-I hope so; at least 4 people since Wednesday have expressed interest, and word is spreading.

Foolery-It's when. Not if, but when.

Annie-A close shave indeed. Poor man has been called to the house three times in the past several days; I admire him for not laughing out loud when I asked what the router was. For the second or third time.

Meg-Don't be surprised if you receive a 1-800-I-Failed-Technology 101 call from CBW asking how to do a blog button.

deborah-All he did was wave a pie plate in the vicinity of the signal. He uttered some magical phrases such as router and modem, but otherwise it was a simple ceremony.

PG-Sergio sounds well-meaning if not heavy footed. This tile repair is in addition to all the damage done to your house by untoward automobiles? It's so nice to meet someone who understands all the disasters of home ownership, most of which could not be dreamt up in a million years. Also, I'm doing your meme tomorrow, be forewarned. The post is eight miles long.

Kate-I'll do you one better. At least yours was just a plain old cassette and not an 8-track, which we had not only in the house but in my college car, a VW bug. With all due respect to the citizens of West Virginia (Hi, deborah! Just kidding here!), the CB Family (my parents and sisters) installed one of those West Virginia State Flowers, aka a satellite dish, which up until a few years ago proudly stood in the yard.

Jim-Monkey Wards was what my parents called it too. Old sayings die hard around here. Thanks so much for all your help.

Hey Jim didn't bring the pie plate over when he tested mine out lol. Glad you're back!

Excellent! You're back and you've got it going on.