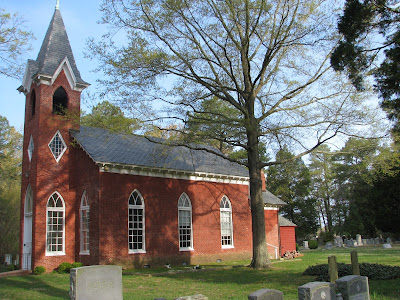 These were taken prior to the Tennessee trip.

It's great to be home, but it's also essential great to get away now and then.

I'm already scouring the internet for inexpensive airfare for a return trip.


Once upon a time, two small-town girls hopped on a plane to Nashville to visit their dear friend Lauren and subject themselves to the torture of a race called Monsoon Marathon and participate in the St. Jude's Country Music Half Marathon.


The attentive Assistant Manager and Snack Supervisor at Chez Lauren is none other than the world-renowned, Culinary Institute of America-trained  Ms. Dora T. E. Ward.

Lauren and her staff abide by several guiding principles.

Baby Sis and I found ourselves in the tranquil yet unfamiliar lap of luxury during our stay at Chez Lauren. From the chocolate bar on the pillow to the french press coffee to the Sunday morning frittata, we were spoiled.

At the crack of dawn Saturday, we went in to Nashville where we spent two days hours and thirty seven minutes deliberately plodding 13.1 miles through anything but luxury. The weather buffet offered almost every option except locusts snow and sun: cold, constant, steady, driving rain; wind; the occasional clap of thunder; one flash of lightning; the slightest bit of sleet; and (reportedly) hail.


Afterwards we returned to Chez Lauren for a hot bath and some wine rehydration.


When the clouds parted, we frolicked in fabulous downtown Franklin and feasted at the Red Pony. 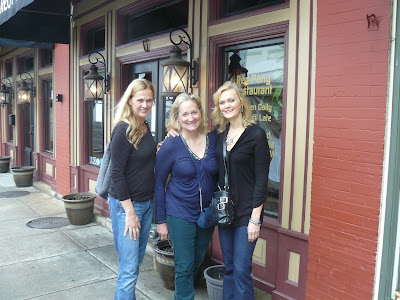 After being in cold, wet weather for the longest thirteen miles that ever was so long, we were ready to get our food on.


The food at the Red Pony, which was Hoovered was consumed before I could take pictures, consisted of a tempura sushi roll with shrimp and cream cheese for an appetizer, halibut for Baby Sis, flat iron steak with chimichurri sauce for me, and Some South American Fish Whose Name Escapes Me--with BACON JAM on top--for Lauren. Deconstructed potato soup was also involved. If by chance you've never heard of deconstructed potato soup, you are not alone because neither had we you really need to try it. 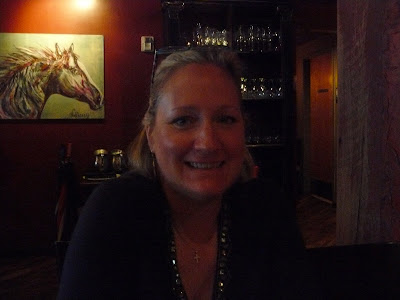 After dinner, we ambled through historic downtown Franklin, 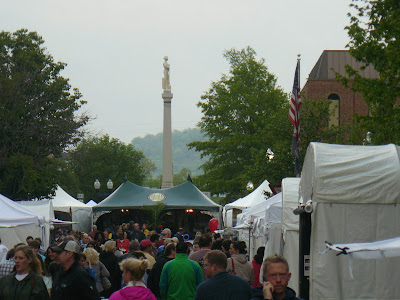 which happened to be hosting a festival. 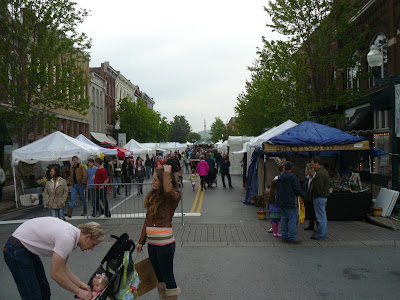 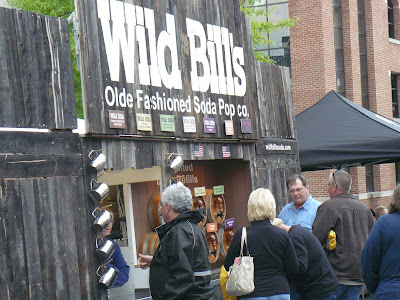 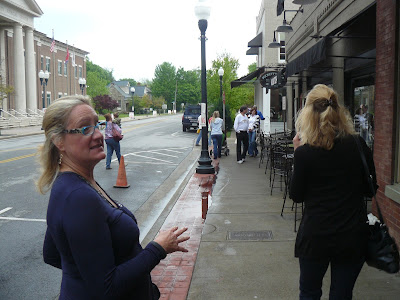 
p.s. Baby Sis and I cannot thank the very gracious Lauren and her Asst. Mgr. Dora enough for their hospitality and generosity during our stay. Regarding the race, if you are able to move at all in a forward direction, whether it's walking or jogging or rolling in a wheelchair, I highly encourage you to sign up for an organized event such as this. We heard from more than one participant that the Nashville half marathon is their favorite. The city is charming but not overwhelming; the course is challenging yet interesting.  Baby Sis and I will return!

Labels: Baby Sis, blog friends, In A Moment of Insanity I Signed Up for a Half Marathon, Lauren, Nashville


After a very rough week, I am now traveling to Tennessee with Baby Sister to run walk participate in another half marathon. We'll be running  walking  doing this with my blog friend Lauren, who traveled with us last year to the Outer Banks for 13.1 miles of misery bliss there.

We intend to have lots of fun.


In fact, we are experts at having fun.

I'll fill you in on our jolly journey when I return.

Have a great weekend.

Labels: Baby Sis, blog friends, For Reasons Still Unclear I Signed Up for a Half Marathon, I'm Supposed to Run Another Half Marathon - This Time in Nashville

We are still struggling to comprehend this weekend's tragic, tragic loss of one of our teens and the absolute horror and heartache that comes from hearing a mother sob uncontrollably and inconsolably because her baby is gone.

And there is nothing we can do to fix it.

Although I have never been shy about hugging, kissing and declaring my love and adoration for my son and daughter, I can't seem to say it enough here lately.

When my daughter was about three she used to say, "Mommy, I love you too much."

I love her and her brother too much, too.

Posted by Chesapeake Bay Woman at 12:01 AM 6 comments: 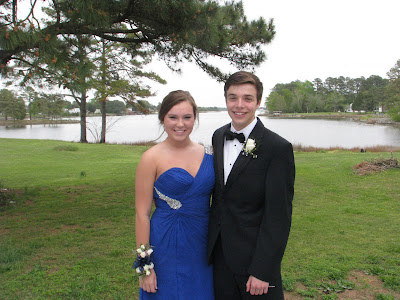 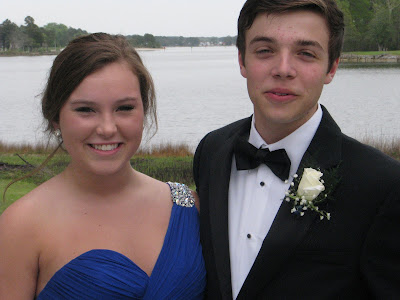 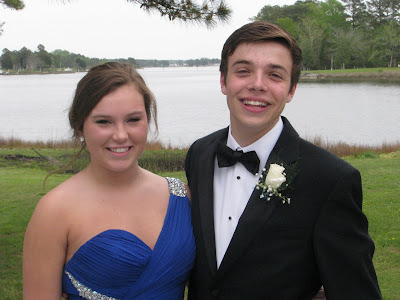 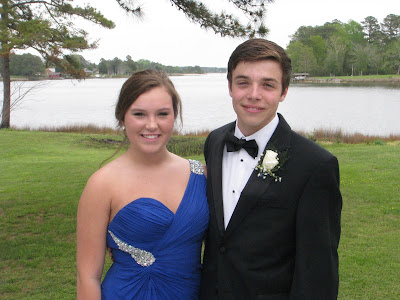 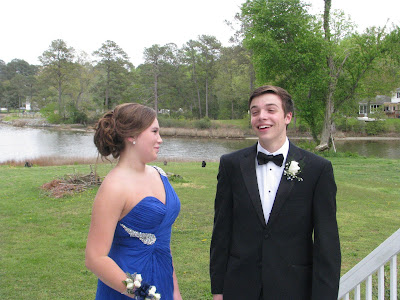 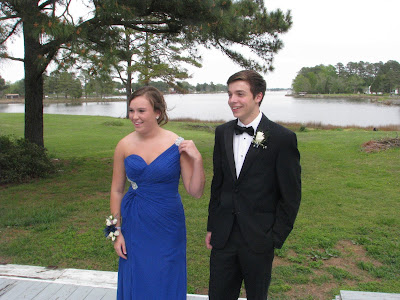 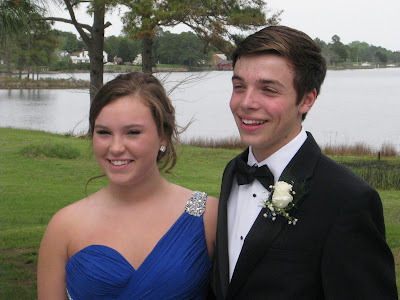 Saturday night was prom night in Mathews.  Son and his friend J.S. had a good time.

But a cloud of sadness hung over everything.

Mathews County suffered a tragic loss Saturday morning.  One of our precious teenagers, who was eagerly awaiting the prom herself, was taken in a car accident.

Hug your loved ones.  Tightly. 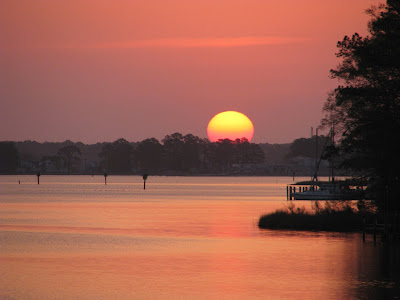 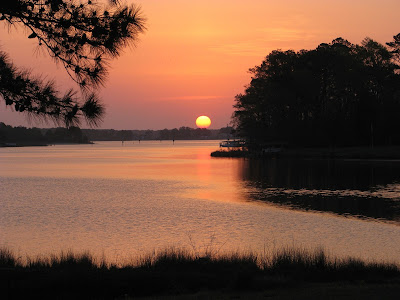 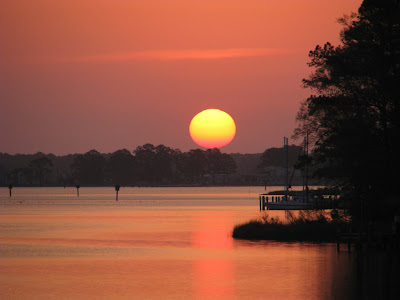 A couple of days ago as I was fixing breakfast for Son and Daughter, I glanced out the kitchen window and was greeted by the sun, who waved hello on its way to work for the day.

(Not only is the sun beautiful, but it's super friendly, too.)

This weekend is the Mathews High School prom.  Son is going with a friend from kindergarten.  If I don't burst into tears during the photo shoot, I hope to have some pictures to share next week.

(These would be happy tears mixed with just a few sad ones that come from the knowledge that in one more blink he'll be out of high school and venturing into a new world. The speed demon known as time never ceases to amaze me.)

Have a great weekend.

A friend from this blog who owns a home in the Cricket Hill area asked me to watch her garden while she was out of town.

(Watch = Water + Note to Self: Please don't forget to water, thank you very much).

The tractor above lives peacefully in the woods on the way to her home. I've admired it for some time.

Another thing I've admired is the view from her dock. 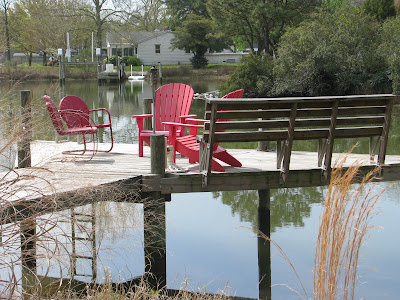 I've had the privilege of sitting in one of those chairs and can tell you that once your feet hit that dock, all stress is immediately released to the universe. 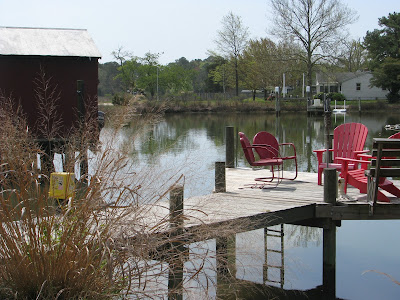 Shifting gears, today includes (unless it rains) a soccer game in Windsor, which is exactly 3,000 miles from Mathews or 2,500 from California, depending on which way you're traveling.

A blog post which began with a whistling tractor and could ramble into perpetuity unless forced to a conclusion ended with pink chairs and a trip to Windsor is now coming to a merciful close.

Labels: Cricket Hill, Glimpses from the Road, If I Don't Say The End I'll Go On Forever, Serenity, Tractors 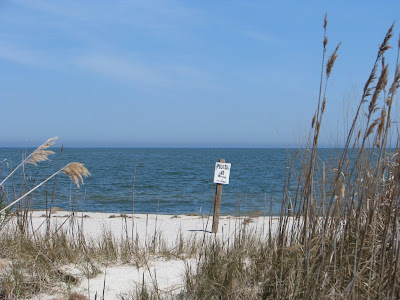 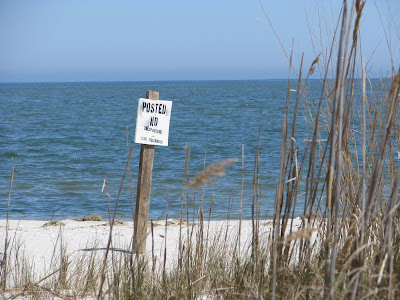 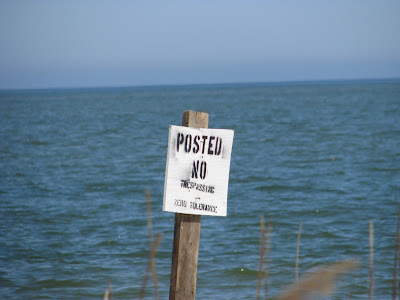 These were taken at Aaron's Beach on Sunday, prior to my departure for The Work Trip. The day was a Goldilocks ideal of not too hot and not too cold.

I returned from the big city last night. The trip was for a two-day training class that should have been one day, but whatever. The consultants conducting the course no doubt convinced someone that stretching it out to two days would be better for them since they would earn twice as much.

My spare time was spent ambling around the grocery stores.

(Most tourists might visit the local museums or other landmarks. No, I drive around looking for the nearest supermarket, where I can easily waste spend an hour or more just looking.)

Although we have two great grocery stores here in Mathews, sometimes I miss the days of being greeted at the door by the smell of something other than fried chicken. Don't get me wrong, I love fried chicken so much I could eat it every single day. But the smells that greet you in a northern Virginia store are heady and exotic. A food fanatic's dream come true.

(On the other hand, an entire aisle dedicated to organic dog food may be excessive. But it's certainly different.)

On one of my exploratory adventures, I stumbled upon a shopping center overflowing with food options. There were at least three Indian restaurants, several Thai, one Salvadorean and one that claimed to be gourmet Russian.

In spite of all this food obsession focus on different foods, not even the lure of readily available, great food could ever entice me to leave Mathews permanently. Temporarily maybe, but not permanently.

No, I am perfectly content with the selections here. I will gladly stop to savor the aroma of fried chicken and will consider it a gentle reminder of how grateful I am to live in such a beautiful, unique place.

Posted by Chesapeake Bay Woman at 12:01 AM 7 comments: 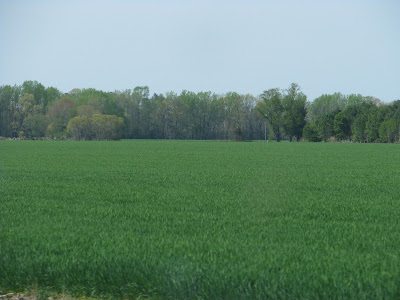 These were taken on my way out of town Sunday. 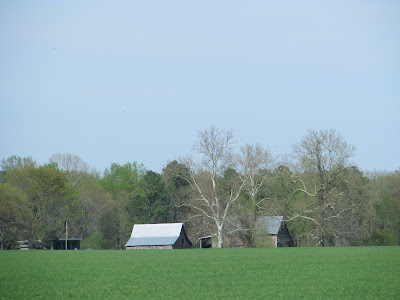 It was a beautiful day for a drive up Route 17. 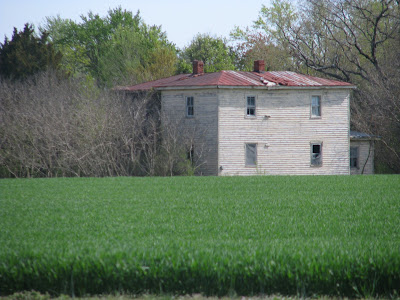 The trip is for work. 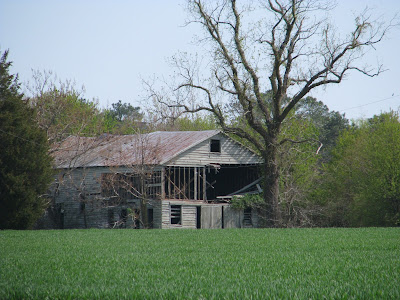 That means a free hotel stay and good eating for the next several days. 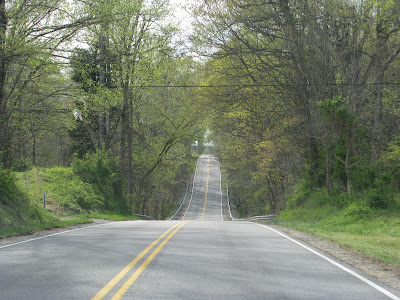 There are trade offs, however. 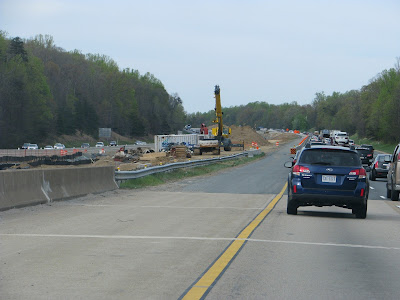 As far as the eye can see.

Since I left my laptop's power cord behind, and the battery is just about dead, postings will be sporadic until I return home later in the week.

Hope your week is full of good things like Thai and Vietnamese food
and devoid of traffic and other headaches.

Posted by Chesapeake Bay Woman at 12:01 AM 4 comments: