Last Thursday I decided to venture down to Haven Beach to see how the hurricane may have changed it.  Haven Beach is adjacent to the legendary Old House Woods, which is said to be haunted.

Even so, I am never afraid to go down here.  In fact I almost always go down there hoping to see something unusual. That's the way life is around here.  You have to make your own excitement by driving around hoping a ghost will jump out at you.  Or wandering aimlessly down the public beaches observing every little change from storm to storm.  Or just dodging the killer insects that divebomb  your vehicle as you're wandering aimlessly hoping for a ghost to jump out.

You know, the usual stuff people do. 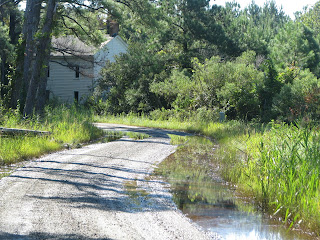 Anyway, I've photographed the road leading to Haven Beach thousands of times before, but the sun was so bright this particular day I couldn't resist the urge to take more pictures, even if they are repetitious very similar to others I've posted before. 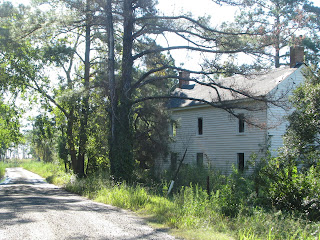 Could this be the next Blog Cabin? She has weathered many a storm, but she sure does need some TLC. Remnants of tattered floral wallpaper are visible in the upstairs windows as you drive by. I'm always riveted to this house and spend an inordinate amount of time lingering outside, absorbing it all in.

Do other people linger to absorb the intangible qualities of the remains of a house or just Chesapeake Bay Woman, the same person who just declared she drives around hoping to see ghosts because she's bored or procrastinating or otherwise lollygagging avoiding the details of her life? 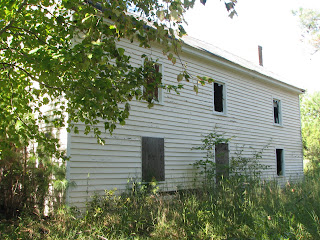 I think Ann Marie told me a while back that the fire department intended to burn this house as part of a training exercise.  Thankfully that hasn't happened. Yet.

Well, I knew it was too good to be true.

Just as I rounded the last bend in the road headed to the beach, I was met with too much water, at least more than my little Saturn could tolerate, and I forgot my hip boots that day.  (I'd walk barefoot through there but there's monsters! ghosts!  dead bodies! all sorts of creatures living in that swamp marshy area, so I never did get down to the beach to check it out and cannot report on any damage there. The other two beaches were altered somewhat but nothing drastic or unusual.

By the way, if anyone ever doubts Chesapeake Bay Woman's driving skills, I dare them to completely turn a vehicle around on this narrow gravel lane hugging deep, water-filled ditches with very soft shoulders and no place to turn around except in the road itself.

Also, I sincerely apologize for all that talk about dead bodies and monsters that last ridiculously long sentence pretending to be a paragraph.

The End.
Posted by Chesapeake Bay Woman at 12:01 AM

My very non-extensive research about Mathews has turned up tantalizing references to ghosts and haunted areas, but nothing specific...what area doesn't have its share of ghosts? If the fire dept. dares burn down that great evocative old house, I will find a way to haunt THEM !!
If I win the lottery someday, I plan to become my own DIY network and hire Courthouse Construction to rehab another lovely old home. (They did such nice work on the Blog Cabin, and with so much heart, too.)
Very impressed with your turning skillz and avoiding ditches --LLC

Enjoyed this so much and am laughing. Your blog will be my bright spot today:) Hope the fire dept. doesn't burn that wonderful house, that's just plain wrong.
Skilled driver, for sure!

wv: gluvelly - CBW easily turned around on the gluvelly road.

You always get to have all the fun. Dead bodies and such notwithstanding....

Were you following me this past weekend?? I contemplated going through the water to get to the beach. My mom and I even got out to survey the water. Because I couldn't see the bottom at the deepest part, I thought better of it and had to BACK THE VAN UP down that narrow road (until I got to one of the sandy lanes that lead into the woods where I could turn around). Old House Woods is definitely haunted. I've had too many odd experiences and whatnot to come to any other conclusion. According to the Brat Child there is a "creepy girl" there. And I've also wandered around that house a time or two. Kindred spirits is what we are.

Love that old house. I'd totally be wandering around it taking pictures too. There are several locally that I frequent. But alas I do not have CBW nerve. The whole No Trespassing thing I just can't seem to over come. And your turn-a-round skillz are unsurpassed!

I bet you made a broken U .. I've driven with you and you are a crackerjack driver ..

And I enesse (VW) thats it for me too

NOOOOOO they are not burning it down! It was set on fire before they had to cut the floor out of it to get the fire out :)

Thanks so much CBW! I was wondering how this road and Haven Beach fared. That house must be pretty close to the "before" of Blog Cabin.

That road to Haven Beach is a hazard on dry, sunny day. Had to back up there one day, too, and on another visit had to get around a truck that was trying to block our exit. It was scary, especially with children in the car.

I never knew that woods is supposed to haunted but that sure explains the unsettled feeling we always get when driving along that road. We have encountered some strange and bad folks out there on Haven Beach as well over the years - enough to give you "the creeps." I'm always worried we'll come upon a bad scene of some kind.

But the beauty of the place is indisputable.

Great driving skills! Haven't turned around in any narrow lanes around here, but back home had to turn around on a one lane dirt road with a rock face on one side w/no ditch, and a good 50 ft drop into a creek on the other.

I think you have, and what I used to have, and that is "wanderlust". Would like to get it back except the price of gas isn't what it used to be.

Would love to see inside that house!

LLC-Mathews is brimming with ghost stories. I once talked to the visitor center rep about doing a narrated, haunted tour around Halloween. Alas she has since resigned her post but we had quite the plan concocted. (Unhatched plans = the story of my life. I can dream them up all day but can never seem to implement.)

deborah - I surely hope your day got brighter than this!

DJ- It was still flooded over the weekend? I am surprised the road hadn't dried out by the time you visited. Guess this means another trip down there to check on things.

Linda, believe me I am a wimp and very rarely venture off the public space, but in this case it's possible to stand in the road and use the zoom on the camera to see inside those upper bedroom windows. Plus, fyi, it's also possible (because it's so far away from civilization) to hear approaching cars from way off. Ahem. Anyway, as I was saying you can sit in the comfort of your car and still see inside if you're so inclined.

Daryl - Yep, a broken U. I didn't have the patience to drive in reverse so was willing to risk getting stuck just to get goin' in the right direction.

Ann Marie - I knew the fire department was involved! Thank you for the clarification. Now hurry, please dial 1-800-CBW-HasNoMemory and reserve my deluxe suite in the Alzheimer's Unit. Thanks.

Sooska - If you like Haven you should also be sure to visit the other two beaches south of here - Aaron's and Bethel. (You may already have, but I just want to make sure. I think they're even more beautiful.) The woods leading up to this beach are chock full of stories. If I had the time this evening I'd post some links but otherwise you can do a search on Haven Beach on the side bar of this blog and some of them should pop up. There are also several books which talk about our ghosts.

Dghawk - Wanderlust is the perfect way to describe it.

Thanks for reading and for commenting, I truly appreciate it.

WHY HAVE YOU NOT GONE IN THAT OLD HOUSE?? I WOULD..JUST FOR THE FACT THAT IT IS OLD.. AND TO SEE IF I COULD CATCH SOME SENSE OF THE PEOPLE THAT HAD PREVIOUSLY LIVED THERE. A BIT OF HISTORY THERE IN THAT HOUSE TO BE SURE!

Actually, The old house by the road is not the house the woods gets its namesake from. The original house was way back in the woods and it burned down many years ago