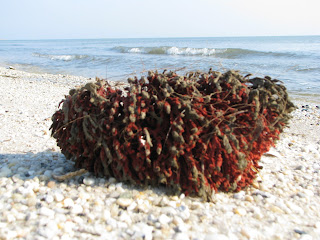 Welcome to Three Thing Thursday, where I share three (usually more) things and I encourage you to do the same. You can share thoughts, dreams, hopes, desires, complaints, constraints, recipes, observations, recommendations, lamentations, obfuscations--anything at all.

1. These photos of sponges (or whatever they are) washed up on Haven Beach were taken back before monsoon season hit Mathews bringing day after day of gloom, despair and agony darkness and heavy downpours. Monsoon season began in September and seems dead set on driving us all to the brink of insanity lingering the entire month. "They" say that Saturday, the first day of October, will be sunny and sixty degrees. "I" say I'll believe it when I see it.

2.  Last night at Beaverdam, the Mathews High School girls cross country team continued their streak with a win against Lancaster and West Point.  Unfortunately, for the first time in several years, the boys' team's winning streak came to an end; they came in second to Lancaster.

Or is it the boys team's winning streak?  I know it's not boy's team's winning streak, because there's more than one boy. I'm gonna stick with boys' team's but actually should just remove team's entirely and go with the boys' winning streak. However, I just realized I didn't use any apostrophe when I referenced the girls' team.  I ought to go back and simplify both sentences, but I'm too tired right now. Who here besides CBW is ready to jump overboard with a cinderblock tied to both ankles if this blog post doesn't get back on track?

3.  Between work and sporting events, I drove approximately 400 miles total from Monday through Wednesday.  Thursday through Sunday will add at least another couple hundred miles to that tally thanks to Chesapeake Bay Daughter's weekend birthday festivities and a much needed trip "to town" (an hour away) to purchase a suit for Chesapeake Bay Son, who will be an escort in next weekend's Homecoming festivities.

4.  Will someone--anyone--please invite me to live in Bora Bora?  I don't need much, just a one room thatched hut over the water. (This over the water thing is important since I never want to have to cut grass or weed beds again.) I'd also like someone to wait on me hand and foot. If they like to cook, all the better. That isn't asking too much, is it? Good, I didn't think so.

Now it's your turn to share four three things. 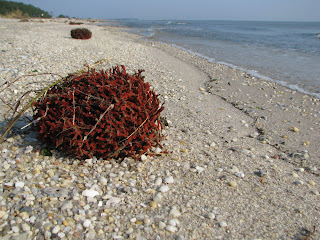 .Bora Bora probably has a monsoon season(but something tells me that everything else about Bora Bora makes it all worthwhile).
.It almost sounds like you are ready to experience "Eat Pray Love, The Sequel", but I personally would opt for going straight to Brazilian music and Javier Bardem.. with some local Bora-licious & Thai foods thrown in. I do enough praying.
.Your son's and daughter's Cross Country teams rock---Grammar rules suck.
. A triad of arrogance,insecurity and paranoia make a challenging person even harder to deal with:"How DARE they do X,Y& Z to ME?" Paranoia and insecurity ensure that he always thinks they are doing X, Y & Z to him. In-laws.....
LLC

Bora Bora sounds like a plan-
Congrats to both Cross Country teams and to you. All are winners!

1.Going to get a few things from my dear mother's home Saturday. Long story, she is now residing in a home that specializes in caring for those with Alzheimer's disease and similar disorders. She has vascular dementia, but anyway, it is very sad to see her home being emptied. Another long story, but that one would involve the use of words not suitable for print-

1. I am not completely packed, I need to be I am not even close I don't think I am going to make it.

2 do you know what number one is doing to my ocd???

3. I still need helpers.. I am scared.. very very scared.

Will someone--anyone--please invite me to live in Bora Bora? I can not offer this but I can offer an invite to live with me in obx.

I don't need much, just a one room thatched hut over the water. (This over the water thing is important since I never want to have to cut grass or weed beds again.) How about over sand.. no weeds or grass to worry with there either.. at least noting that needs cutting.

I'd also like someone to wait on me hand and foot. If they like to cook, all the better. I am used to this.. I can do this for you. and you know I can cook

1. The rain has stopped and the sun is shining and the grass is growing. Time to exercise.

2. Fall is everywhere and promises to be beautiful.

3. There's a birthday coming and a cake to bake! Life is good.

Yeah yeah .. trouble is if you did get invited there'd be something happening you'd need to stay home for .. and I had no idea that was a sponge .. nevertheless I hereby invite you to on my house, come on!

1. Just dropped over 4 LARGE on a new air conditioning unit for the house. Am considering hosting a party. We'll place our drinks upon it and oooh and aaah about what a great decision I made and how quiet it is when it runs.

2. And then I will bring you inside to inspect our new heat exchangers, which replaced cracked ones that had potential to leak deadly carbon monoxide into our home. So there's that.

3. It's a quiet day today. Working at home, but the bed beckons me for a snooze. Maybe this afternoon I'll tuck in and watch the soaps - oh wait, there ARE no more soaps!

Hi! Not sure if I've ever introduced myself here before. Our recent move has everything in a such a blur. My family is new Mathews County. We live on Gwynn's Island.

I took very similar photos on Haven Beach, and am currently struggling to upload them to my blog. I say "struggling" because of my slow Wild Blue internet connection. I'm sure you know all about internet struggles (I think I read a post about it here once before). Anyway, just wanted to say hey! Maybe I'll see you around town sometime!

I'm commenting here because I cannot for the life of me figure out how to comment on CB Mamma's blog....but it was awesome today! Tell CB Daughter I will be sending a package this weekend!

1. I'm visualizing a giant bird swooping down and carrying away in its beak the building in which I work-once I've stepped away of course. They say if you picture it, it will happen.
2. My Mimi cat stared at the lightswitch in the hallway last night, then jumped up and turned it off with both paws. Now that's entertainment.
3. Anne Marie, I want to move there too so be on the lookout for a place for me and my three babies!

I have been down and out since Tuesday, I mean down for the count, could not even get out of bed all day Tuesday, every time I tried to stay up for like 10 minutes I could not, had to go lay down and just sleep for 18 hrs, I did go to the doctors because I have to work this weekend...sinusitis it is...man was I sick...

so today worked like a farm animal to make up for the lost time, did not stop all day long, now I'm cooking dinner and have a minute to sit and catch up...I feel better already, ahhh modern medicine...

congrats to the teams and the neat little packages on the beach are interesting...

have a wonderful evening everyone...

1. Think I may sleep with the windows open tonight.

2. Where ever every one is going, I want to go too. I'll even do the cooking. Have been told I'm a pretty good "cooker".
2a. I'm tired of 10 hr work days 6 days a week.
2b. Have not had a land line since the hurricane. Thank goodness I have wireless internet.

3. I can't enter a comment on CB Momma's blog either. Have tried several times but they don't post.

WV: combran. My comb ran away with my brush and I have a hair stuck in my eye teeth and can't see what I'm saying.

I am making this recipe this weekend:

Saw it in Coastal Living magazine today and thought I'd share.