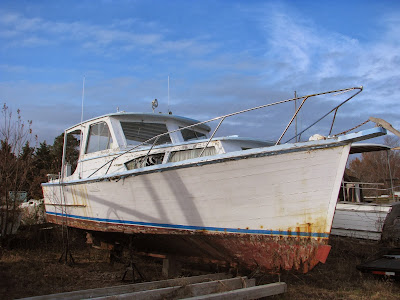 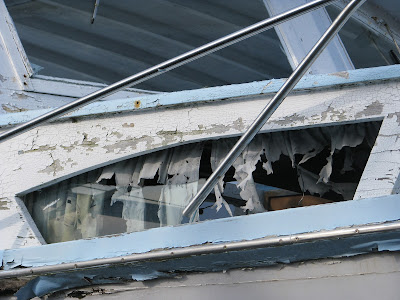 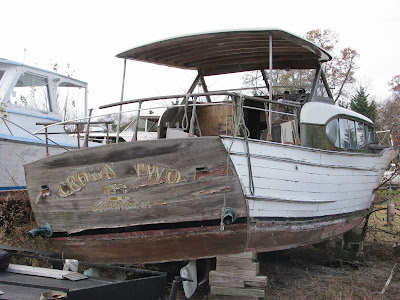 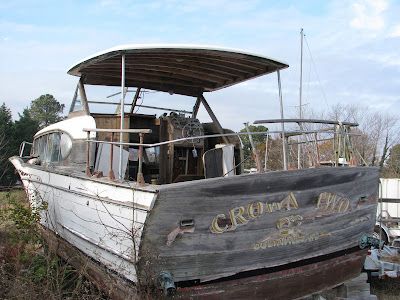 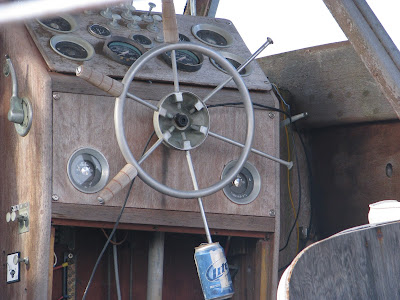 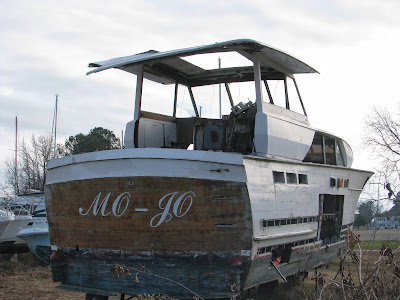 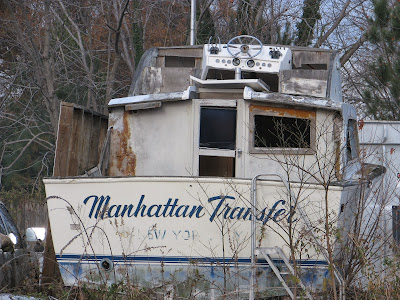 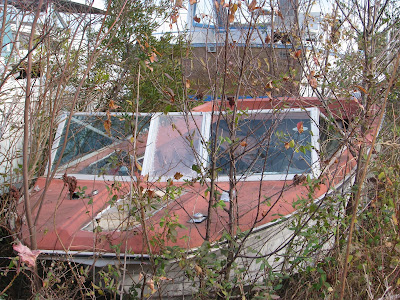 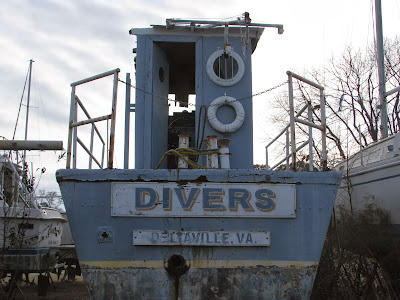 Here are more shots from the boat graveyard at J&M Marina in Deltaville.

I could wander around this place for hours and be easily amused; this is just a small sampling of all the characters hanging out there.

Right now, though, what's hanging out is my tongue--as in I am dog tired.  I awoke at 5:30 Monday morning, left the house at 6:15, and didn't return until almost 11:00 p.m. after driving 180 miles, crossing three rivers twice and cheering on two games of basketball.

(I've grossly exceeded my monthly allotment of references to numbers in one sentence alone. My brain is waving a surrender flag.)

(Also, Mathews JV girls won against Northumberland.  Daughter is now on the varsity team; they lost.  Still, they played a good game, and the season looks promising.)

There are more shots of J&M boats, including some from the "living" part of the marina, that I'll share later in the week.

I love old boats. My favorite here is Manhattan Transfer, because of the singing group, which I remember from its first incarnation in the late 60s.
But the old printer in me must take exception to the poor dead boat named MO JO because its owners had the temerity to use script caps, which is a terrible typographical no-no.
Sounds like you and the kids are keeping busy. Good for them for (a) being involved (b) attending a winning school and (c) having a helpful mother who is willing to drive long distances.
Hi to all, hugs to your mom,
Luv, K

Thanks for sharing your pictures. I know where I'll be spending a few hours the next time I'm in Mathews. I'd enjoy checking out the old boats and maybe the owner would let me salvage a few parts and pieces.

I think Crown Two's helm is made of teak and it looks to be in decent shape. A little sanding and polishing and it might make a good addition to the bar.

Kudos that you can upload photos and write coherent sentences after the loong day you had !
I love those old boats..I was going to name the little red & white speedboat my favorite, until I saw the blue "Divers" one below it ! It has stolen my heart...I can almost envision Olive Oyl, in her lanky 30's fashions and her captain Popeye shoving off in it!
LLC

Kay - Thank you. Manhattan Transfer caught my eye for the name as well. MO JO is a huge boat with a strong name. But it is so weak now in this graveyard.


John, if we look at these as boats that must go back in the water, the only outcome is bad. Can't happen. If we view them as pieces of art that can be deconstructed, there is so much here. Infinite potential. Bravo.

LLC, the Divers boat is just precious! (I have a few more shots that give even more perspective.)
Seems to be waiting for a Hollywood producer to come calling.