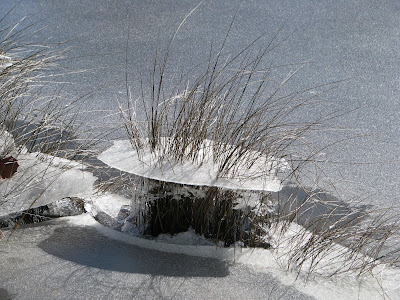 Here's a really bizarre picture of ice on some marsh grass that halfway reminds me of those huge collars the vets put on dogs to keep them from scratching their ears.

Speaking of really bizarre, I'm about to share with you my knowledge on the topic of a little-known malady known as dew poisoning.

Very Important Disclaimer: The problem is, I don't really have any knowledge on the topic of a little-known malady known as dew poisoning. The information you're about to read is very likely incorrect. I am merely passing along a description of what we in the Chesapeake Bay Family referred to as dew poisoning. For all I know I'm describing the first signs of malaria or diphtheria or Rocky Mountain spotted fever. Not that I'm a hypochondriac or anything.

Yesterday as I sat blinking back tears from the monotony of my paying job, I noticed that I was growing older by the second and rotting away in an office my hand was hurting. Upon closer inspection I discovered a slit, a cut in the crease where my pinky finger meets my hand (the tough part of the hand).

This cut has the exact same shape and feel as cuts I used to get on my feet. Cuts or splits that we called dew poisoning.

We went barefoot 365 days a year in warm weather, and often I'd have to go out early in the mornings to feed the animals or hang clothes on the line. Occasionally there'd be dew on the ground.

One time I noticed a cut, a slit right under my baby toe, in the crease where the toe meets the foot (the tough part of the foot). Since it hurt (just enough to be aggravating), I showed my mother. Now whether she was joking or whether she was serious, I do not know, but she said it was dew poisoning. There was nothing that could be done except wait for it to heal, so "Run along now and have a nice day."

So, a child walks barefoot across a dewy yard. The dew causes the skin to split under the baby toe. This sounds disgusting equals dew poisoning. At least in the Chesapeake Bay household.

A quick Google search produced a variety of explanations for dew poisoning, none of which resembled my definition, but almost all involving hooves. Wet hooves. Belonging to horses. And cattle.

Sure, there were a few articles that mentioned feet, skin rashes, itchy skin or swollen calves in humans, but most of the dew poison cases involved horses.

Have you ever heard of dew poisoning?

Note: The Dictionary of American Regional English (implying that this is a regional term) has this to say about dew poisoning:

So you have hoof rot? On your hands? You are quite a peculiar acquaintance, my dear Chesapeake Lady!
(When our horses got that, we put milk fat on their hooves. Try it)

never heard of it

That's a new one for me, CBW! And we went barefoot a LOT back in the day.

We use to walk threw the soft tar barefoot an get that all over the bottom of our feet. Maybe that protected us for the dew. It look real good on Pookies new carpet also.

OK OK this is going to be in my head all day rotten feet and hands on a woman???? I got to go throw up!

Okay, I get that all the time .. in the winter only tho .. and I call it dry skin ... I walked barefoot indoors all my life til I developed a neuroma and walking barefoot anywhere anytime was painful. No dew here that I have ever trod upon. But I bet if you Google
cracked skin under little toe .. wait I'll do it .. okay while I just learned a lot of stuff I wish I hadnt there's no name for this .. I call it 'oh the skin under my little toe is cracked open again'

I don't know if there were cuts on my feet but I can tell you they were loaded with splinters and green.
dew poisoning... that is a new one.

Whatever it is, dew poisoning sounds a lot more romantic and acceptable than "greasy heel", its other name...

I've never heard of dew poisoning either. But I did get some bad ice once, and I was sick all the next day....

Never heard of dew poisoning but
right now I have snow rash! And lots of it!
<><
wv= guess as in guess what? we are getting more snow saturday and my rash will turn into an infection!

I never heard of Dew Poisoning, but I've had that same split under my baby toe. I always thought it had to do with dry skin or something. People in the Catskills and Rockies call it Mountain Dew.

That's funny, I always thought that those splits in your skin were caused by lack of a vitamin? Vitamin B?

I may be right off the planet with that one.

A nice snowfall here in NYC.

Angela-It's great to hear from you. Nothing as exciting as hoof rot on the hands. Just cut it on a can, presumably, but it was the same shape/feel as what I always called dew poisoning on the feet.

Meg-Maybe it was a southern catch-all phrase for any sort of injury/ailment of the foot. And when I say southern I mean limited to the Chesapeake Bay Family household.

MM-We LIVED for walking barefoot over our paved lane in the summer evenings. We'd pop the tar bubbles and yes, drag the tar inside. Regarding the dew poisoning, actually if you saw what I am talking about, it's nothing more than a cut, but the real deal evidently must be disgusting.

Daryl-Dry skin is definitely a problem, but this is something different. It's hard to explain.

AM-Splinters you couldn't even feel because feet would be so tough. Green....oh yes. And how about walking through the yard early in the morning after the grass had been cut? It'd look like you were wearing green boots.

PG-Agreed, greasy heel sounds like something a mechanic would come home with.

MPM-Were you in Mexico or in downtown Mathews Court House? Because the drinking water is about the same.

GJ-At least you know what I'm talking about with the split. It's very aggravating no matter what it's called.

Annie-You could very well be right about the vitamin link - that would be accurate in my case. Sorry to report that our trip has been cancelled due to that very snowfall. Once again, so close!

I have just one question. What in the hell is milk fat?

A pony that was staying on our ranch one winter died of it. We treated it like a cow, and our cows never died of hoof rot or whatever it was. We were ignorant of horse-y stuff.

Now I need a good cry.

recently I had a small open scrath on my ankle,wearing sandals I walked in heavy dew.later that night I went to th ER with a swollen foot with larege blister with red streaks starting up my leg' The dr.said contact dermitis,when I revied where I had been and what might have happened the only conclusion was dew poisoning.I asked may senior friends about dew poisiong. Here in the South many knew of it.As a child we were told not to go in the dew with an open wound. At one site on the computor I found the bacteria that causes it but have not been able to find the site again

dew posioning on humans is for real. appilicans called pison risin. it was from early morning walking in grass. is a fungus of a sort and only a few got it. like poision ivy

My mom said her mother used to call it a "dew crack." I just know it hurts like a $*@% and there does not seem to be anything I can do about it. OUCH!

My cousin Lisa used to get this when she was little. She and I would be out playing in the early morning when there was dew on the grass. Nothing happened to me, but her toes would split almost immediately when she walked in the dew. I don't know if they would bleed, but they hurt. Her mother called it "dew poisoning". She's 54 now and I don't know if she is still effected by it or not.

Thank you for having the courage to share your lifes encounter with u, even through all the naysayers and narrow minded ppl being mean, by not putting they're selves in your shoes or even having the compassion to try and think like that.

Found your blog when searching for dew poisoning after my 87 year old mother mentioned it. I believe it is in fact a very real thing some people can get. Glad to know it wasn't just something she made up.

Living close to the Cumberland Mountains in Tennessee, we were often warned of this when we were young. I do not know if it is actually a disease people can get but we were never allowed outside barefoot before the dew dried from the grass by our grandparents.

I was raised in Hampton, VA in the late 50s, early 60s and my Mom always used to warn us not to go out barefoot in wet grass because we would get "Dew Poisoning". Never saw anybody with the problem. May have just been a way to get us to wear shoes!!!!

LOL I heard the old people in the western part of NC talk about dew poisoning...but I never got it. Just never liked going out and getting wet shoes from the dew anyway. LOL