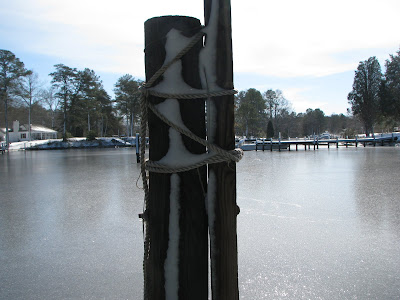 Last weekend after the snow storm passed, I took some pictures from the end of my dock. The snow and the thin coating of ice on the creek made otherwise ordinary objects take on a new look.

Today, we continue with my great-uncle's description of the Old Mill Skating Rink in neighboring Gloucester County. Bill is married to my grandmother's sister, Nellie, and I'm so indebted to him for sharing his memories with us.

"There were some special nights at the skating rink. For example, skating was allowed until midnight on New Year’s Eve, and a special program was planned on Halloween. There was usually a Ladies’ night on Tuesday when girls were admitted at reduced prices. The usual admission for skaters was 35 cents which included the rental skates. On Friday and Saturday nights when the attendance was large, there was a standard program which might go as follows with skating from 7:30 to 11:00 P.M.:

The program varied from time to time, but basically it was the same. Sometimes there were even printed programs, and the girls would have boys sign up for each skate.

As the skaters became better and better, shoe skates became popular, and the rink did a brisk business in selling of shoe skates. A standard pair of shoe skates sold for approximately ten dollars, and these became a favorite gift for birthdays and Christmas. Mr. Hogge would take orders for shoe skates and would have them delivered to the rink in about ten days.

In October, 1939, I was discharged from the Army and promptly reenlisted for an Air Corps unit in Miami. Within a few weeks the President announced a huge expansion of the Air Corps, and my unit was disbanded. I ended up back at Langley Field and was assigned to the GHQAir Force headquarters which was headquarters for all the combat units in the Air Corps. I immediately resumed my trips to the Gloucester skating rink.

Several of the men at Langley liked to roller skate, and soon I had a full car load of skaters on Friday and Saturday nights. We shared expenses for gas, the Yorktown ferry, and entrance to the rink. During most of 1940 a small group of us from Langley would go to the rink two or three nights a week in addition to Friday and Saturday nights. On many nights we had the rink almost to ourselves and could practice figure skating and other skating routines which we could not do on Fridays or Saturdays because of the crowds.

In January 1940 I met Nellie Streagle, a cute little girl who lived at Flat Iron just across the road from the rink. Nellie was a good skater, and she and I found ourselves skating together and even entering skating contests which we won several times. In January I also met Lucy Jeffries, an elementary school teacher who lived at Shackleford near West Point. Lucy and I soon started a year long love affair which consisted mostly of going skating together. In the meantime I skated almost as a team with Nellie. Towards the end of 1940 this became a problem with Lucy, and we ended our affair in January, 1941.

Nellie and I started dating in the summer of 1941, and when she graduated from Botetourt High School in June, 1942, I got her a job at Langley Field at the Officers Club. In 1942 I went to Officers Candidate School in Miami Beach, but returned to Langley as a second lieutenant in November, 1942. Later in 1943 I volunteered for pilot training, and never returned to Langley. Nellie remained there during the entire war. I received my pilot’s wings in August, l944, and our long separation resulted in us going our mutual ways. We had contemplated marriage, but the long separations drove us apart, and we did not get back together until 1999 after both our first spouses had died.

Over the years the friends we made at the skating rink became life-long friends. At least four boys from Langley who went skating with me met local girls and married them. These were Nellie and I, Annie Brown and Lee May, Harold Fenstermacher and Catherine Jordon. and Bill Altemus and Polly Dunston. Lee May died several years ago, and Annie lives in an assisted living home in Richmond near her son Ronnie. Harold and Catherine live in Gloucester as do Bill and Polly. Nellie and I were married in 1999 and live in Tampa.

As I mentioned at the start of this article, the Old Mill was a great gathering place for the young people during the years 1939, 1940, and 194l. Within a few months after the war started in 1941, the government instituted gas rationing, and it became increasingly difficult for people to get gasoline for recreational purposes. The gasoline rationing for family automobiles was only three gallons per week, and it became unpatriotic to have your car parked in front of a skating rink or movie theater. The rink continued operations throughout the war years, but it was never the same after early 1942. One time in 1945 I flew a military plane to Langley Field and visited the skating rink on a Friday night. There were only a few young people at the rink, and I did not know anyone. In fact, most of the young people of the years before the war were then working for military facilities in the Chesapeake Bay area or had entered the military service.

I cannot name more than two or three girls from my high school graduating class of 1934, but I can vividly recall the names of many of the girls I met at the Old Mill before the war. All of them would be at least 80 years old now, and I am sure they will not mind my mentioning their names. How many of these do you know? Annie Brown, Nellie Streagle, Lillian Tucker, Dorothy Thomas, Trevilian Kerns, Elizabeth Peters, Beth Walton, Mae Vaughn, Shirley Green, Elsie Green, Louise Mele, Edith Pemberton, Polly Dunston, Lucy Jeffries, Judy Jeffries, Jean West, Alta Fleming, Betty Mae Belvin, Gwendolyn Harris, Gwendolyn Anderton, Terethia Jenkins, Ida Mae Jenkins, Catherine Jordan, Betsy Ishkanian, Billie Ishkanian, Cecil Waddell, Ada Marie Shackleford, Lorraine Thomas, Nancy Blair, Molly (What was her last name? She lived in Mobjack, and often came to the rink with her mother. I remember her because she was a girl friend of one of my friends from Langley, and we often gave her a ride home after skating.)"

p.s. from CBW: That cute Nellie Streagle, my great-aunt, is as cute today as the day she was born. The youngest in her family, she looks exactly like my mother - they could be sisters. Love you. Nellie and Bill. Thanks for being such an inspiration to this family and the world, once the movie producers catch hold of your love story.
Posted by Chesapeake Bay Woman at 12:01 AM

I love it! It makes me think of The Notebook, so poignant and sweetly romantic. Thank you Bill for sharing your story with all of us!

Thank you Mr Bill Braxton for sharing your story and for just a few minutes sending us all back to a time that was just a bit quieter.

When I grew up "if I ever did" it was not cool to be a guy skater. Thats a sham,look at all the good times I might have had. The youth of Mathews and surrounding area's sure could use that rink today!!!MM

By the way, the picture is great. You took the picture from the end of what dock? Last time I was there you had no end! Storm got it!! MM

What a super ending to the story. I was waiting to hear how he ended up with Nellie.

These posts have been very interesting CBW. And I imagine even more so if one grew up in the area too! Well done to all concerned for an interesting look at times gone by!

Beautiful photo, lovely story. We "study" history, but this is the stuff history is really made of, and that gets lost on the way.

That's such a nice reminiscence. It makes me want to jam my feet into the white roller skates I got one year for Christmas - they had green wheels and green and white pom poms. Of course they're long gone now, but I put miles on them at my favorite rinks in the '80s.

My mother is besides herself. She's now world famous in a blog :-)

And no wonder I spent every weekend at the skating rink in my hometown of Phoenixville. Sad its now a factory floor.

Thanks for getting in touch, long lost cousin!