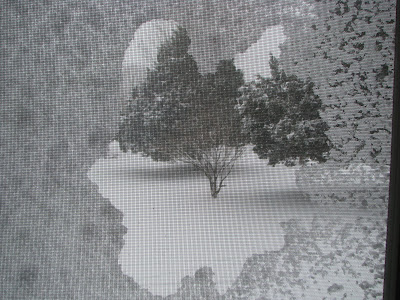 This might be the worst, weirdest picture ever to be posted anywhere, ever on this blog. During the height of last weekend's snow storm, frustrated that I couldn't take Precious, my camera, out in horizontal precipitation, I took a picture of the view from my bathroom window. That's right, the bathroom window. You can even see the screen and barely anything else.

The odd porthole formed by the snow was irresistible to me. In real life, the view was very interesting. In digital format taken by someone who only pushes the button in Auto Mode, it's a freak of photography.

The shape formed by the outline of the snow reminds me of that inkblot test they give psychiatric patients people. If you're not familiar with the inkblot test, here's what my BFF Wikipedia said about it:

The Rorschach test (German pronunciation: [ˈʁoɐʃax]; also known as the Rorschach inkblot test or simply the Inkblot test) is a psychological test in which subjects' perceptions of inkblots are recorded and then analyzed using psychological interpretation, complex scientifically derived algorithms, or both. Some psychologists use this test to examine a person's personality characteristics and emotional functioning. It has been employed to detect an underlying thought disorder, especially in cases where patients are reluctant to describe their thinking processes openly.[3] The test takes its name from that of its creator, Swiss psychologist Hermann Rorschach.

Now, looking at that outline above, the first thing that comes to mind is a moth, which reminds me of the movie about the Moth Man. It was one of the very few scary movies I've seen in thirty years recent memory. The Chesapeake Bay Children and I watched it one night on the recommendation of Baby Sister. (This should have sent up a red flag, but it didn't.)

The Moth Man movie was very disturbing, mostly because it's based on a true story out in West Virginia. I've conveniently blocked out the details, because that's how I survive my whole life such traumas. By pretending they didn't happen or don't exist.

By the way, the Chesapeake Bay Children were laughing during most of the movie. Every time I screamed, which was approximately the entire time, they broke into hysterics. There's nothing like quality family time.

Did I mention the inkblot test gauges one's emotional state and/or tests for underlying thought disorders? OK, so never mind that talk about the creepy Moth Man and blocking out traumatic events.

Instead, I see a dainty, delicate, beautiful flower and a happy butterfly resting on a petal. In the sunshine. And a deranged, killer moth flitting in the background.

p.s. What do you see? What does that shape formed by the snow on the screen look like to you?
Posted by Chesapeake Bay Woman at 12:01 AM

Wierd and wonderful. It looked like a strange whimsical cross-stitch to me, or the phot of one in an old book, partly destroyed.

Some of the best photos are the unexpected ones.

Oh OH OH!!! I know this.. (having taken more than one ink test in my life...) see a woman drinking massive amounts of wine and wandering aimlessly around Times Square!

WHAT THE HELL IS BBF TALKIN ABOUT. You have at least 12 big words explaining the ink blot you no I cannot read that many big words. Ok let me look at the picture agian. Hm, hm, ok,ok, hm, BLAM sorry dropped my coffee! Ok HM,hm,hum,hum, I think it looks like a tree with snow around it takin by a cheap ASS camera..Which we no is not the case!!! LOL

What were you doing in the bathroom that long anyway you know what they say if you are in there longer than 15 mins. You asked about the ghost: I have been staying with my second family for a few days.They had some bussiness in DC. I was off line (and having fun) for a few days! so just shoot me for having fun!! LOL Ok back to the ghost: I noticed before I left my dog (she sleeps with me under the covers very cold natured) was getting up in the middle of the night and barking at something in the room. She would go down stairs and sleep on the couch. Not at all like her. Last night the same thing happen. I got up look around, there was nothing, climbed back into the bed. I guess it was about 45 min. later when I felt what I though was Dutches (my dog) climb back in. BUT NO DUTCHES the covers move like som ething was getting under them. I also felt a warmness as the covers moved. So you ask what did I do, I told the ghost, if it was a ghost, to keep her hands to her self on our first date. I slept like a baby the rest of the night. Dutches slept on the couch. Wierd!!! Ok I Need your help to name this ghost something nice something sexy!!I think she would like a name. MM

Oh my Daryl is gona yell at me today. Sorry Daryl I will work on my grammer skills.(NOT) lol MM

I see one of those profile cuttings of a head and the tree is the brain. The end. Wine One One.

Famous Pookie sayings :Don't call me Im not bailing you out. : they are not hand me downs they are recycled : you will never be to big for me to smack your ass. : If you steal my car one more time Im callin the law. :go ahead stick your finger in that socket see what happens. :Boy wait tell your Daddy gets home.: and the best one of all I LOVE YOU ANYWAY! there are 1000 more MMM help me out.

O.K. call the men in the white coats with the huggie jackets and padded wagon...but...here goes...I see an old crone or witch's face...facing to the right, she has a bonnet on, a pointed hooked under nose, and a pointed chin! There! now that's a test result that ought to get me in therapy but it's what I see!

MM.. this is all for you love..
1. WTH is a BBF??
Big Breasted Friend?
Big Bird Forever?
Best Buddy Forever maybe?

2. you are making up your own netonyms now... fun.

4. Famous Ruthie sayings..
"Don't make me turn this car around" (when the children were silently wishing that would be exactly what she did cause we didn't want to be in there anyway)
"If you take my car I am calling the cops" (some children were smart enough to dump said car and get in another vehicle I won't name names but damn I was smart)
"Girls" (which was a blanket for EVERYTHING could mean dinner or if you don't shut up I am going to ring your neck or you need to stop because I am going to PIMP or do you REALLY think you are leaving the house dressed like that or I am so disappointed in you depending on tone)
"Oh my word" (which is a more refined version of oh you all, she liked to take possession of things so it had to be HER word not something that involved all, not that I ever understood her word)

the rest I will have to save for my own blog cause I could go into my father next.

AM. BBF is best bud forever #4 And how about this one: you are cursin for a brusin. or boy Im gona whip the white off of you. enough, enough we could go on forever. Your blog? hum!

You are too funny! And I happen to like that photo...

And now I'll stop doldering (dolder is my WV).

I see a Monty Pythonesque mouth.

Thanks for including the pronunciation guide: ˈʁoɐʃax. It helped tremendously.

Now I'm wondering if someone thinks of me as a big breasted friend.

I see a much better photo than CBW sees. At first I thought the screen was a torn lace curtain from BHE's grandma's house. We get dirt, hard water spots, cat prints, nose prints, finger prints, butt prints, more dirt, fly specks and pollen on our windows, but nothing that looks frozen. How do you DO that?

Ok AM, I did not come up with these as you say, netonyms on my own. My son wanted me to start texing (talk about a cluster f@#@#@)He said to limit my texing and use abriviations,thus BBf.Now depending on who I might be texing BBF could mean: best bald friend or Biggest balls friend,bad boy friend biggest bullsh@#ter friend or biggest boner friend, best bodied friend or best blogger friend like you. you get the picture (not CBW picture I still think it looks like a damn tree with snow around it LOL)I know you have many of your own. MM

OK this is the last one (I had to catch up) CBW I froze some yellow snow for blogfest. You know for stinga nettle stings. the cooling effect might help. Thats me all was thinking ahead. LOL MM /////// (calikers) thats what Pookie use to call her boys . we went threw 5 gal. of milk a week. MM

CBW- The Mothman movie was AWFUL not close to the real story. I will admit, I went looking for Mothman and have even traveled to Point Pleasant, WV to attend 2 Mothman Festivals. I promise I'm not wierd and I've never taken an ink blot test. I love the pic, and my opinion is looking sideways it sorta resembles a dragonfly (another good paranormal movie btw)

It looks like a butterfly to me. With two trees in the middle.

MM, you should ask her what her name is. I sort of like Marilyn. I can't believe she is sleeping with you now. How very unladylike.
Please do not tell her I said that. I don't need her throwing things at me when I come for the tour this summer!

I'm voting Bad Boy Friend (not bad as in BAD but as in ba-a-a-a-ad; there's a distinct difference).

The state of Texas?
I sort of love that picture.
I thought it was pretty.
Simple.
And serene!

It's a weird and lovely photo. But I'm afraid that all I can think of right now is you outside tomorrow afternoon with a HOE, trying to remove 30" of snow from your driveway. I wish I could teleport you my snow shovel. Good luck. And take photos!

Middle Sis - It's good to hear from you! (p.s. the Let's Dance Wii game? Will be enjoyed for many, many, many years to come. I LOVE it.)

Mathews Mark - It's so nice to have you back. I would like to enter the Name that Ghost contest, but I'll need time to think about a name. What do you think her name should be? Also, my favorite Pookie-ism is "Go ahead, stick your finger in that socket, see what happens." Died laughing reading that one.

Thanks to all of you for commenting, I thoroughly enjoy reading your interpretations.