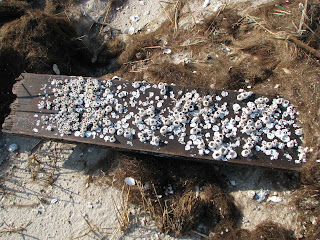 The board above was lying on Aaron's Beach when I visited a few weeks back.

If I had nothing else to do (like a job, two children with calendars chock full of social and sporting events, Christmas on the horizon, a blog, a book in the works, a house to maintain, seven thousand animals to feed, you know, those one or two things that can eat into someone's spare time), I would take stuff like this and turn it into something artistic.  What that would be, I do not know off hand.   Plus, there's the smell to contend with. Often I'll drag stuff home, toss it in a box and later wonder who on Earth left what smells like rotting crabs or dead fish in the house.

Maybe, on second thought, taking pictures is the best way to take advantage of the material. I'll go with that for now.

The sunglasses below washed up on Gwynn's Island a while back.  Although not readily apparent, there's also a fishing line tangled up on them.  I thought it looked interesting, and the setting sun provided the perfect lighting. 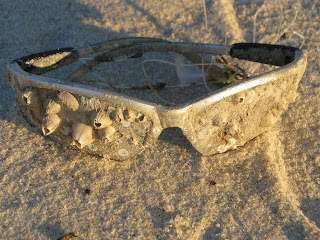 Although I don't normally tamper with or stage things I'm photographing, I thought they'd look good against a bushel basket that was also on the beach. This is a bit of an odd angle, but we're talking about a pair of sunglasses with barnacles and fishing line on them, so I'm pretty sure we're not looking for perfection. 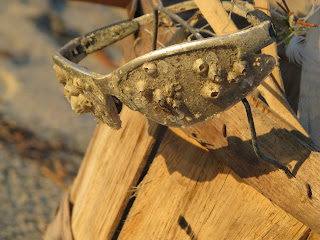 Here's a collection of things washed ashore, snapped when the sun was just dipping below the horizon. I'm not particularly fond of the trash, but this is a reasonably accurate cross section of what was on the beach that evening. 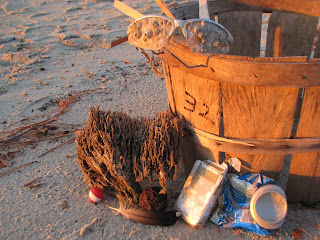 I could spend days, weeks, maybe even years wandering around the county's beaches admiring the works of art that spontaneously appear.  Although barnacles are not normally my best friend, especially when they're coating the bottom of a boat, they can be pretty when seen in the right context as in dead.  Just kidding.  Sort of.
So can a pair of forgotten sunglasses.
Happy Sunday.
Posted by Chesapeake Bay Woman at 12:01 AM

I enjoy seeing things thru your eyes!
3 inches of snow here, its way too early for that stuff!

Always a pleasure visiting you. Barnacles and all.

Love those glasses! Instead or rose-colored...we could say someone was looking through barnacle-covered glasses...translate as you will.

The glasses belong to Neptune (the beer and the sigs are mine) BAHHAAA better send those glasses back before he gets mad!!!! you people are way to serious!!!

I have a barnacle fetish which I discovered this last October while perusing the beaches. I have a million pics of barnacles. Love the sunglasses! And I think it was a great idea to stage them with the basket. I'll be missing the Christmas parade :( I have a basketball tournament I have to attend. Please drink lots and lots and lots of wine for me. I need it.

OH, look, you found my sunglasses that I lost in Dewey Beach last summer!

Just found your blog while searching for beach info...and what a great post here on your found treasures. Those barnacles glasses are really wild. I thoroughly enjoyed reading your witty post! :-)