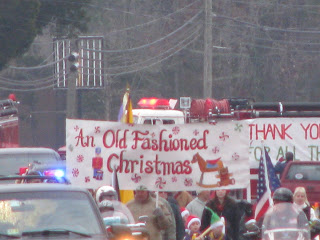 Yesterday was the Mathews Christmas parade. 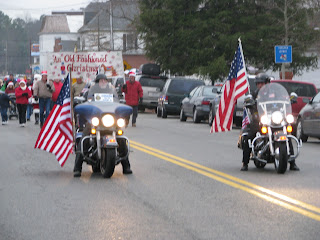 This year's parade was different.

Typically, the nighttime event was led by a man on a horse.  This year's parade, held during daylight, was led by an iron horse of a different color to mix a few metaphors.

The skies had been overcast all day.  Just as things were getting started, the first few drops of cold rain fell, which may explain why Santa Claus came first rather than last. 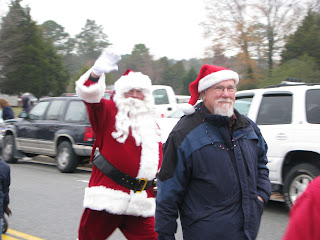 One of my favorite entries was a miniature 18-wheeler. Since there were no combines or other farm-related equipment, no horses, and no lights, all of my screams of joy were focused on this: 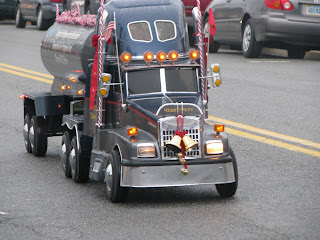 I'd give anything to drive this fun little vehicle.  All of life's stresses could be cured with just one turn behind the wheel of this thing. 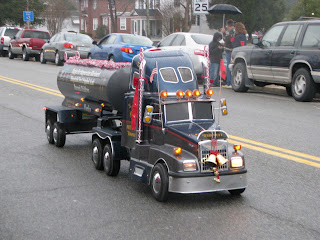 There were several vintage vehicles participating.  I wanted to drive them all. 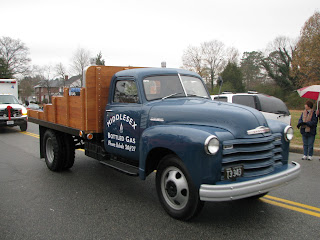 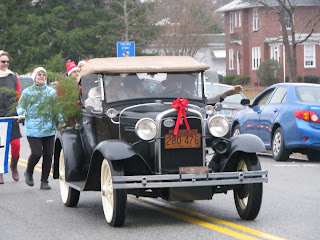 I think it'd be fun to drive one of these firetrucks too, but I'm pretty sure I'd need a CDL to do that legally.

And I don't have one of those. 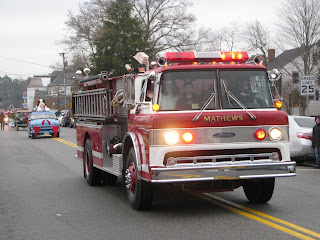 Over the next few days I'll share some of the approximately fifty thousand photos of the abbreviated parade.
In the meantime, I think I'll look up the requirements for obtaining a commercial driver's license.
And becoming a Shriner.
Posted by Chesapeake Bay Woman at 12:01 AM

Love the mini 18 wheeler! What fun! The Shriners here have old jalopies that spray water on unsuspecting spectators (did I really write that?)
What a great parade, so glad you enjoyed it! I'd love to drive all of those vehicles too, including the fire trucks. My son and husband drive fire trucks, and you don't have to have a special license here.
It's raining here now, with snow (6") expected by Monday morning. Ah...winter.

That little 18-wheeler is adorable. And I love those vintage autos. Did you wear your crab hat?

Can I get a mini-tractor trailer for my kids? Super-cute!

does the mini 18 wheeler have a mini driver?

Shriners have the best cars. The Deltaville Heritage Day parade sported about 30,000 shriners I think. And about 20 fire engines.