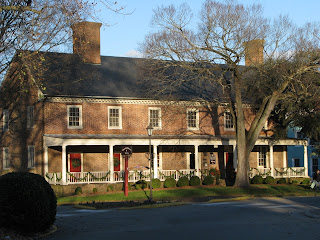 Above is a shot of the old Boutetourt Hotel, which skirts the historic court circle and now houses the Gloucester Museum of History.  I took this photo while sitting in the comfort--and precious, precious warmth--of my vehicle before the event, which included the lighting of the official Christmas tree.

According to the Gloucester website , the  Boutetourt building has been in existence since at least 1774, when a paper described it as "the tavern at the Gloucester Courthouse."

My mother, who's from Gloucester, wrote a little something on the Hotel Boutetourt that I'll share sometime, which is to say after I make sure she's OK with my sharing it.  In that essay she describes the co-owners of the hotel, sisters named Miss Hilda and Miss Gussie.

But let's return to the handbell concert, already in progress.

There was lots and lots of standing.  And waiting.

And it was cold. Very, very cold.

Below is a shot of the court green before the festivities began.

You can't tell from this picture, but it was downright frigid.

Did I mention there was waiting?  Lots and lots of waiting. In cold that felt like the Siberian tundra. 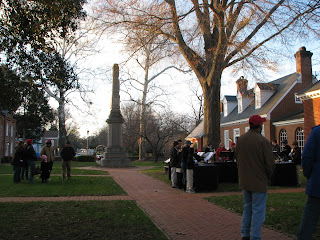 After days, weeks and months an hour or so of waiting, the concert began.

The crowd erupted in tears cheers. Although there were requests of "Free Bird" shouted from the audience, the handbell choir stuck to traditional holiday favorites, like Oh, God-- Rest, Ye Merry Gentlemen.

(That's exactly how CB Daughter said it when I asked what they'd be playing.  I said, "I don't think it's Oh, God." But that was before I knew how cold it was going to be.)

Below is a shot of Chesapeake Bay Daughter pretending like she's not suffering from frostbite. Behind her is the street which I walked down many, many times in my youth with my grandmother who lived on Corr Street. 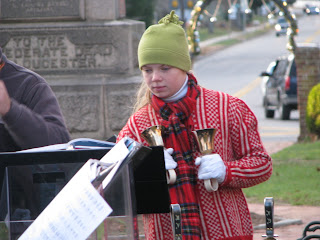 My grandmother had no driver's license, so we'd walk from her house to Tuckers, the very best toy store ever, and then on to Leigh's Market, or the Colonial Store or the Safeway for groceries.

This particular area holds many warm memories for me, and to see my daughter performing so close to where my grandmother lived warms my heart. And warmth is good, especially when you've been standing for three days a long time in the cold.

Click here to read about one of Chesapeake Bay Daughter's previous concerts that proves why CBW is on Miss Manners' Most Wanted List and may never be allowed into Ware Church again.

Click here to read about one of Chesapeake Bay Son's concerts which, among other things, proves CBW has attention deficit issues and a severe lack of patience.  And also why Abingdon Episcopal Church won't be in any hurry to have her back.

What did you do this weekend?
Were you cold or warm?
Posted by Chesapeake Bay Woman at 12:01 AM

my oldest played handbells, did you know there is a rule that if the concert is outside, it must be so cold your nose freezes? Yep, there is one:) I have no attention span either, and was easily distracted:)
I mostly stayed in this weekend, other than a run to the grocery store. Our first big (3") snow, and colder than the north side of a...oops. Today it will be a warm 25 degrees with a wind chill of 15.
Stay warm!

I was cold. We got the tree Saturday which wasn't bad as I was clutching three (3!) Chihuahuas for warmth. However Sunday we went to the Seahawks game. In a concrete stadium. For 3 hours. In the cold. Where TOG didn't bring the stadium blanket because "we'll be fine."

I was warm most of the weekend, thanks to a two-day long fire in the fireplace that my husband kept stoked. I was cold on Sunday night, though, as I lucked into a ticket to see the Steelers play at Ravens Stadium in Baltimore. Fortunately, the Steelers win (ugly though it was) warmed me right up!

I did errands and beautifying and it was fcuking freezing/windy ... GAH .. is it July yet?

You are a wonderful momma ...

It's fricken freezin' here, too. Got cold fast. It's not so bad out there if you're bundled up right. It's just too soon to be so bundled up, I guess.