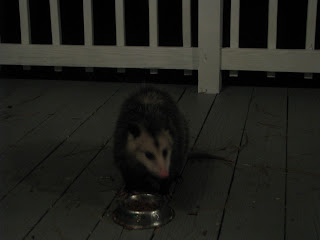 The other night as I was wasting my life away on the Internet working on the computer, I heard one of the four thousand cat food dishes being shoved around in a most unruly manner on the deck outside my bedroom.  Right away I knew something other than a cat was out there. 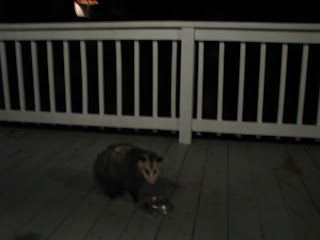 (Since the flash doesn't work on my camera, the lighting in these shots is terrible. The flash, like everything else I come into contact with, doesn't work due to the magnetic field referenced in yesterday's post.)

Although opossums are very common around here, you're more likely to encounter them dead in the road  than dining on Special Kitty dry cat food on your back porch. But it's been very cold here lately, so a nice dish of Special Kitty is just what the opossum ordered.

What is it about dry cat food?  In the summer, blue jays snack on it like it's a tub of hot, buttered popcorn. Raccoons love it.  Canada geese love it.  Even my dog Buddy would rather eat dry cat food than dog food.

The cats, however, think it's absolutely vile and hold special emergency meetings where they concoct schemes to get me to buy them some canned cat food. For example, there's the "We're going to meow you to death and claw your screen doors off the hinges until you give us want we want" ploy.  Or the "Let's see if we can kill CBW by charging in between her ankles as she tries to negotiate the back steps carrying bags of groceries" routine.  Or the oldie but goodie, "Let's slaughter a bird, rabbit, mole or vole, pull out its guts, and leave the carcass and assorted parts right on her front door step so she has to hurdle the scene of the crime to get inside."

Yes, they have their tricks, but given the volume of animals I'm feeding and the expense of canned cat food, they're getting dry food.  The End.

Anyway, this opossum took his time dining on cat food and then sashayed down the steps, in no hurry whatsoever to get wherever he was going.

My BFF Wikipedia says this about Mr. Opossum:
"The Virginia Opossum was the first animal to be named an opossum, usage of the name was published in 1610.  The word opossum comes from the Algonquian aposoum meaning "white beast."  ...Their unspecialized biology, flexible diet, and reproductive strategy make them successful colonizers and survivors in diverse locations and conditions."

CBW says this about Mr. 'Possum:
First off, I really hate the spelling.  Can we drop that annoying "o" and be done with it?

Second, 'possums sound a lot like us Mathews folk, with all the flexible diets and ability to survive in diverse locations and conditions, which may include below-sea-level elevations and absolutely no access to Thai or Vietnamese food. Whatsoever.

Third, I thought the white beast was already in our midst:

In other news unrelated to aggressive poultry, cat food, or opossums,  the Mathews Christmas parade is Saturday at 3:00. I hope to be there, camera in hand.

Have a fantastic weekend.
Posted by Chesapeake Bay Woman at 12:01 AM

Well, you've got one possum, and he will tell his/her friends, and they will tell theirs, and it will snowball into a possum free-for-all at feeding time. Just letting you know:)

wv- fulatess - it is fulatess to try to get rid of possums.

I can not possibly tell you how much I LOATHE possums. My absolute hatred of them was no further lessened recently when I went to place a bag of trash in the outside trash bins and as soon as I opened the lid, there was one of those evil things, just lying there, staring at me.

I think it traumatized me for life...taking the trash out is now, permanently and forever, the husband's job. I think I'm having a special vow renewal ceremony for that alone...so we can add that to our vows.

Possum party at CBW's. It's BlogFest for Possums.

Possum's are bad news STAY AWAY when they are backed in a corner they are fierce fighter's with razor sharp teeth! If they have young they are twice as bad!! There was a cat food processing plant in Reedville I believe it was called Huff and Puff cat food. Don't know if it is still there,since most of the fish steamer's have gone.

We don't see many of those 'round here. We do see fox (foxes?) though - a red one regularly trots through my back yard. In fact, I saw one over in the actual, paved town of Gaithersburg just last night. Near the railroad tracks. He looked like he was trying to get... somewhere, but he wasn't sure where.

My cat hated the crunchy food too. And the dog barely tolerates it himself. He used to just opt not to eat it, and apparently some industrious mice carried those giant kibble pieces from his bowl all the way over to the other side of the kitchen, where they, uh, squirreled them away in the back corner of a little-used drawer. I found their stash and went ballistic. Right after I photographed it and blogged about it.

Anonymous-I remember Huff and Puff! Had no idea it was a local area operation.

Yes, I know they are ferocious, although I've never seen them behave that way. This one was content just to sit and eat and let us watch him through the glass. The outdoor cats didn't pay him any mind, and he didn't seem to care about anything but eating.

CB Mother never talks about possums without mentioning their ferocity, their teeth and their nighttime yard clean-up abilities - as in they will eat any and everything that happens to be in their path and they scour the area.

Off to begin another fun-filled day that has already been action packed and it's barely 7:30 a.m.

wv: your life is certainly not borienow, is it?

The last Possum encounter I had was through the Brat Child. There was a wounded possum in the babysitter's yard. The local police came to "take care of" the situation. The Brat Child was convinced the Possum was going to jail. Have a fantabulous time at the parade. I am disappointed I will miss it but basketball and getting a tree came into play. I need a weekend down there ASAP with WINE as I am in the process of being single once again.
WV- flianha name you give a flea that keeps biting you and attacks in packs (think pirahna)

I took a baby one, left behind by its mother, to the Humane Society and a month or so later saw him grinning from the pages of the Gazette-Journal as an about to be returned to the wild feature. Sometimes good things happen. Everything is beautiful in its own way. Love Mum

I am not sure how I feel about dropping the O .. on the other hand, have you met MPM's new pal at work? Guinness .. he looks somewhat like Mr Possum

I'm with Mum and Lynne M. on this..I think Mr. 'Possum is adorable and deserves a chance like all other animals.
If OPOSSUM means " white beast", then I'm pretty sure opossum should be in the homo sapien category, as I deal with white beasts every day and am staring at a few right now...
I don't know what it is about dry cat food, but I have a similar problem. New kitten, Mimi, is SO particular about what she eats, but has NO problem eating my senior cats' prescription dry food, meanwhile, they have no problem eating her dry kitten food! Serenity now!
Love,
Baby Sis aka 'POSSUM

Hmmmm. The only thing I know about those critters is that they stink to high heaven when they crawl under your portable classroom to die . . . nasty!

Possums have a strategy for having sex? Do they write books & give lessons too?
I wonder if it's the same 'sex-strategy' used by my 3rd ex-wife......ya know, roll over and play dead until the excitment is over.