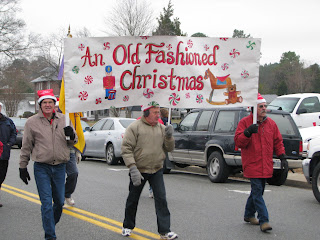 Here are a few more shots from Saturday's Christmas parade.

Since it was drizzling, I opened the back hatch of my car and stood underneath, which didn't necessarily make for great photos, so my apologies in advance.

With me were Chesapeake Bay Son, Daughter, two of their friends and several of my friends, one of whom was Lucy.  Lucy and I played basketball, ran track, and laughed together in high school.

We are were both very silly. To this day, the first thing we do when we see each other is bust out laughing.

Over nothing in particular.  Just the sight of each other is enough to ignite a session of incessant cackling.

My high school English teacher might bust out crying over the use of bust out instead of burst out, but my English teacher needs to understand that there's a difference between formal writing and my writing conversational writing. Also, I think I just made up the term conversational writing, which may well be an oxymoron, so let's stop this side note and my parenthetical additions before they take over the blog post. 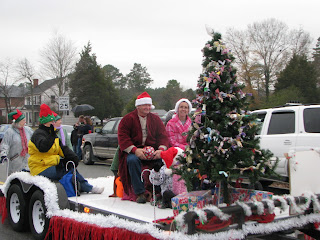 Watching the parade with Lucy was something else, let me tell you.

Below is another friend from our class, Glenda.  She's always smiling, even while marching for miles in the cold rain. She also makes a mean deviled egg, fyi.  But that has nothing to do with Christmas or the parade.  Just a bit of trivia. Hi, Glenda! 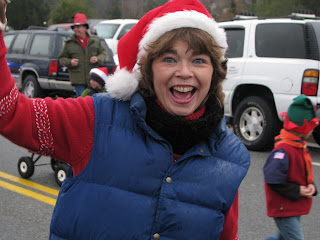 The car below was festive and cheerful.  A happy entry. 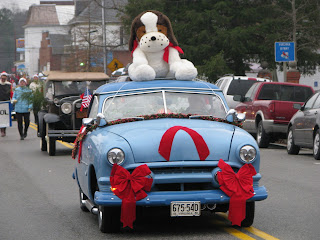 The clown below was slightly less than cheerful at having to walk through the rain.  She pretty much said so when she marched by, bless her heart.  Right around this point, Chesapeake Bay Daughter's friend declared her fear of clowns.

Mrs. Clown didn't hear her though.

I love clowns.  Remember Bozo the Clown?    Anyone? 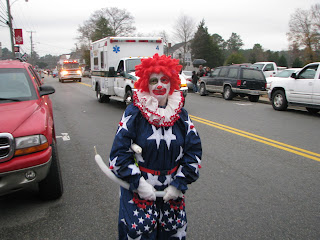 Speaking of enthusiasm or lack thereof, the Chesapeake Bay Children (in their Santa hats) and  one of their friends (wrapped up like an Eskimo), pretended not to know me and Lucy, who were squealing with delight, laughing, hootin' and hollerin' at the passersby.

Honestly, it was difficult to discern which spectators were children and which were supposed to be the adults.

Just look at the enthusiasm, joy and embarassment festivity on their faces. 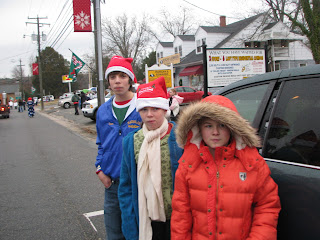 Lastly, speaking of adults acting like children friends, here's a picture of me and Lucy trying to act like we have some sense to stay dry. 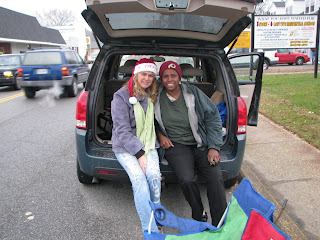 Although I missed the usual Mathews-themed entries, such as boats and farm equipment,  I thoroughly enjoyed the parade, even if the rain did cut the festivities short.
Any time spent laughing with friends, though, is time well spent.
Posted by Chesapeake Bay Woman at 12:01 AM

Laughter is always good, your children will learn that one day:)
Fun pictures!

Really, CBW the Mathews Christmas Parade? If the parade gets you that excited, come on by the house tonight and we will watch some air move! I mean really!! I wonder what watching the submarine race's would do for you??? You know I'm just messing with you right?? don't get me started on that damn parade!!!

1. I wonder if the deviled egg thing runs in the family... (waving at cousin Glenda on the screen)

2. I was at that parade.. on the other end parked in Kris's yard.

4. Each and every day that passes makes on more day closer to the extra special super duper day of DECEMBER 26TH!

dyinessi I hope that when it is my time to go.. I end up dyninessi.

Anonymous-Watching air move is one of my favorite things! How did you know?

This year's parade was slightly disappointing, but I will chalk that up to the weather which cut things short and also the fact that I loved the nighttime parade so much. I don't do well with change. But the rain certainly put a damper on things.

Even so, yes, I did get excited. The expression on the kids' faces pretty much summed up how everyone else felt.

I agree about laughter - it is the best way to spend any amount of time!

The parade looks like it was fun - despite the rain!

I want whatever Glenda is having, that smile is awesome .. and um did you um notice that Mrs Clown was fondling that oddly shaped balloon?

Lucy, while sitting on the bench during a basketball game, objected to a call by the referee, who had a mouthful of gum. She rose to her feet and shouted, "...bad call and why are you chewing like an old billy goat. Everyone else on the bench was doubled over laughing...including the coach. The referee was not offended. And those were the days of our lives. Mum

CB Mumma-I had completely forgotten that particular Lucy story, but oh how I can hear her sayin' it. Dying laughing just thinking about it. She is truly something else.