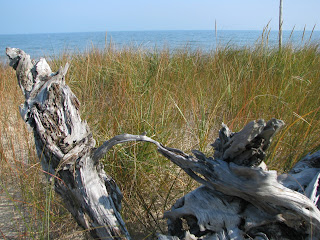 Today's photos feature driftwood, and the accompanying narrative features drifting, as in off topic.

Or something.  See above about drifting, which may soon apply to the reader, who is no doubt drifting off to sleep. 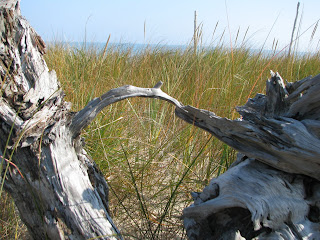 Below is a piece that looks like more driftwood two dogs barking.  There's one on each end.  Click on the image if you can't see, but there are even eyes on these dogs. I wonder what they're barking at?  I think it's geese.  Canada geese.  Thousands of them that never leave, ever. 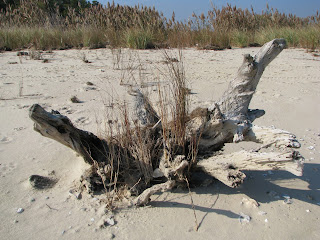 Now we come to the piece de resistance in this strange little exhibit.

The photos below, of what appears to be some prehistoric creature with arms outstretched, are from Cow Point, at the mouth of Queens Creek.  I shot this back in the summer. (The photos, not the prehistoric creature, also known as a piece of driftwood. But of course that didn't really need explaining now did it?) 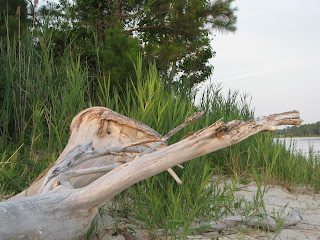 All this fellow needs is a cape and perhaps a coat of paint to touch up his facial features, and he could be the mascot of Queens Creek. 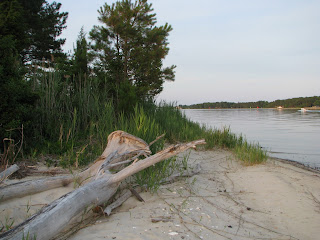 Not that we need one, especially with this beast around:
Driftwood Trivia
Wikipedia says: "According to Norse mythology, the first humans, Ask and Embla, were formed out of two pieces of driftwood, an ash and an elm, by the god Odin and his brothers, Vili and Ve."
Gustav Trivia
Wikipedia says, "From the time of the Romans, white geese have been held in great esteem....Whereas wild geese have a horizontal posture and slim rear end, domesticated geese lay down large fat deposits toward the tail end, giving a fat rear and forcing the bird into a more upright posture. This also completely prevents flight, though geese will run and flap their wings when startled, and may get a foot or so in the air momentarily... Domestic geese have been used for centuries as watch animals and guards, and are among the most aggressive of all poultry."
Posted by Chesapeake Bay Woman at 12:01 AM

In the fourth picture, I see a giant praying mantis! Attack of the Killer Geese vs. the Killer Praying Mantis. Gustav would probably win, of course, he would just eat the praying mantis:)
I see the same things you see in the pictures - is that good or bad?:))

When I was knee high to a grasshopper I ask my Grand father what Driftwood was after careful thought He said " Its a tree that has fought, but ,lost the on going battle between Land and Sea. The remains are a reminder that the battle rage's on." I look up at him and said its just a piece of wood. He look down at me with a smile and said,"to some people thats all they see".

deborah - It's very comforting to know I am not alone. Whether that's good or bad is probably up for debate....

Anonymous - That is one of the most beautiful descriptions I've ever heard. Thank you for sharing it.

CBW, me too. I mean, thank you, Anonymous.

And there I was, looking forward to seeing what you had for Three Thing Thursday, and wondering "Hey, CBW has finally lost her schmidt". But no. It's me (it is I?) who needs to start searching for my long-lost and sadly missed... what was I saying?

Has Gustav stolen my mind?

Not to make light of Anony's comment but it made me think back over someone's comment that a burp is a fart that never had a chance .. talk about digressing....

My parents used to have "watch geese". After meeting Gustav, I wouldn't take one on!

I am addicted to driftwood and I live in a freaking desert. Thanks for the pics! If I could, I would make all my furnishings and decorations out of them. I'd use one for an Xmas tree too. Looks like you have unlimited pieces to work with.

Mrs. F - I wholeheartedly blame Gustav, every chance I get. Maybe we can send out an international search party to locate our schmidt.

Daryl-Again, it's nice to know others see it too.

Diane-Pre-Gustav, my mother had a goose that would sense an intruder before the dogs would. That goose would honk and set off a chain reaction of barks from the dogs. I never knew they had this sort of reputation (even though the evidence was literally in my back yard) until my BFF Wikipedia informed me.

Autumnforest-There are many beautiful pieces on the beaches here. Some of them would make great coffee tables (with glass tops).