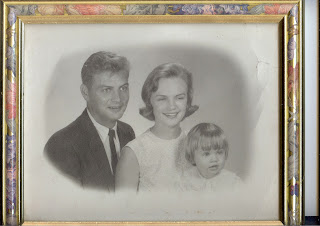 This is a scanned photo (yes, scanned while still in the picture frame) of me, my father and mother circa the year electricity was invented 1966-'67.

Just look at the happy smiles on everyone except baby Chesapeake Bay Woman, whose stunned look of disbelief is no doubt related to that haircut she's suffering sporting.

Ever since that picture I've rebelled against bangs and bobs of any sort. We won't even talk about the Dippity Do they used to put on my hair.  Oh, the humanity.

But this post is not about me or my perceived indignities hair.

It's about my mother who is celebrating a birthday today.

Having a birthday on Christmas Eve really bites. She'll be the first to tell you so, although I doubt she'd say "bites."

Birthday presents are usually an afterthought for the giver, who by the time Christmas Eve arrives is usually ready to collapse from exhaustion focused on surviving last-minute Christmas preparations.  Birthday cakes get lost in the shuffle of fruitcakes, gumdrops, candy canes and eggnog.

Tonight, however, Chesapeake Bay Mother is throwing her own birthday party which will include a bounty of seafood.  I've been told to bring a seven-layer Mexican dip, which certainly cannot be confused with standard Christmas fare.  Baby Sister will travel home from Richmond to help us celebrate. Unfortunately Middle Sister, who lives in Georgia, won't be with us as she is preparing for a trip to Jamaica her own Christmas celebration there far away from this bunch.

Although I live right next door to my parents, and Baby Sis is not that far away, we really don't get together as often as we should. This birthday party is bound to be loaded with fun and laughter.

Before I close, I'd like to share a story involving my mother and Christmas--but not necessarily her birthday--because an inability to separate her birthday from Christmas appears to be the theme of this post.

One year she was performing the seasonal dance we all know called Decorating Under Duress, the Stress Edition.  She had decorations everywhere and cords---miles and miles of Christmas lights, some old and some even older than that--stretched and entangled all over the living room floor.

As her mother mopped her brow and hollered for Baby Sis and Middle Sis to break up whatever fight they were in, Chesapeake Bay Angel Oldest Sister decided it was time to lighten things up a bit and do away with all this tension in the air.

Just as my dear mother bent over to plug some half-frayed cord of lights into a socket to make sure they worked, Chesapeake Bay devil Oldest Sister clapped her hands sharply and loudly.

You know, the sound one might hear just before being electrocuted shocked from a frayed electrical connection.

Well, some of us found it funny.  Others did not.  And that's all I have to say about that.

Happy Birthday indeed! Hope you have one heck of a party. Make sure you take the karaoke machine! Your Mumma really knows how to "shake her moneymaker!"

Oh no.. I have forgotten mothers birthday!!!! Jill forgot to remind me that selfish little...

now how cool is this? to have your birthed day buried in tinsel! I'd love it, to have mine forgotten and misplaced. Sigh.
happy happy and pass the bean dip.

Chesapeake Bay Devil MY how that just flows...

Allow me to translate CB Mother's comment above since we have our own language.

Qwaa is pronounced like a crying baby (waaaaaaa)and is used in those moments when there is either nothing to say or there's so much to say it's time to revert to another language. Either/or.

Middle Sister invented the word even though she doesn't remember doing so. Oddly, the remainder of the family remembers vividly.

Middle Sister was very vocal, animated, lively and extroverted as a child (still is today). She loved talking, and one of her favorite games was interviewing other people. She'd pretend to be Barbara Walters and record her interviews with a tape recorder, often to our chagrin.

Anyway, she invented the word "qwaa" when even she herself could not come up with an appropriate response to whatever the situation happened to be.

That's how I remember it anyway. I am sure someone will correct me.

Fast forward to today, where the Chesapeake Bay Children use the word multiple times daily. No lie. We e-mail each other and use it as a sign off.

It's a very versatile word.

(Or qwah, we don't care about the spelling around here.)

Merry Christmas and Happy New Year.
And of course, Happy Birthday to your mom.
-- K

Happy Birthday to your beautiful mother.

And Merry Christmas to you and yours, my friend. xoxo

Happy birthday to the wildest woman on Waverly! Will raise a James Brown-inspired toast to you this evening, AFTER church, of course.