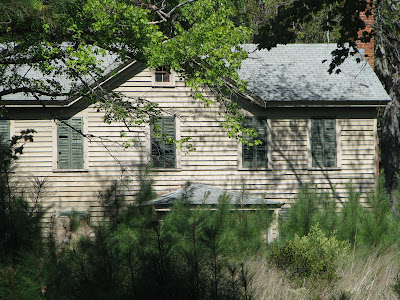 Driving back from Bethel Beach the other day, I took a back road I'd never been down before, because I was feeling brave and wanted to outwit the horseflies dive bombing my car. I slammed on brakes and gasped when I saw this beauty hiding in the woods. The picture does not do it justice. I would pay good money (where good money equals whatever spare change happened to be gunked up with coffee in my cup holder) to go inside this house. I really wanted to go in this house.

Below is the second installment of the college essay I wrote about Mathews and what I thought of it as a teenager. My opinion has drastically changed, although some of the nuances of our habits described here are unchanged.
===========================================
Escape from Mathews
Part Two
"I remember when I was in high school, all my friends and I ever wanted to do was ride up and down the road all day long. A car is a must in Mathews because it's the only way you can see anybody. Every weekend the teenagers pile into their cars, buy a few six-packs, and ride up and down the Main Strip, which is the stretch between the Tastee Freeze and the one and only grocery store, A&P.

Everybody knows everybody else by the cars they drive. I could be driving down the road and a friend's blue Pinto would be approaching. We'd blink our headlights on and off, which meant, "Meet me at the Tastee-Freeze." There we'd line up our cars just so, roll down our windows and catch up on the latest gossip.

The four main topics of conversation had to do with who was pregnant, who was getting married, who was getting divorced and who had died. (Occasionally we'd talk about who'd been in a fight recently, but we could always read about that in the Public Record of the county newspaper.)

This was our idea of an exciting Friday night."

-Chesapeake Bay College Brat
----------------------------------------------
This Friday night ritual was then--and is still now--referred to as "going up the road," although I am reasonably sure more was discussed than gossip (she says in horror, because now she is so averse to gossip). Another signal we had--and the old timers still use--is tapping your break lights when you pass a car you recognized.(I could write a novel on this subject of communicating via car in those days before cell phones. We were nothing if not creative.)

Have I mentioned what an odd bunch we were?
Posted by Chesapeake Bay Woman at 12:01 AM

We're so old-fashioned out here -- we wave.

I KNOW! How lame is that, right?

I tease you a lot, but I really do get it. When you're from a one-horse town with one traffic light, where the sidewalks are rolled up at dusk and the big deal is the football rivalry between the neighboring towns, you really need to get the heck out.

And then you need to move home to the house you grew up in, one house away from your parents, and write about it every night, wine in hand.

Or beer, when you've finished the wine.

We'll be needing some photos of the inside of that house. I know you can think of something, Cheeky.

The Mathews wave consists of lifting your index finger from the steering wheel as you get within waving distance of the approaching car. That Mathews wave is more subtle, more subdued, not as enthusiastic as the blinking of the headlights, and not nearly as nutty.

In Tennessee, our wave was to lift all four fingers while the thumb was left to steer. I love the brake tapping, though, it's like Chesapeake Bay Morse Code.

Least you had a traffic light.

I almost forgot. I posted a picture of a Colombian fiddler crab in your honor.

CBW
I've decided that it is time for you to put your big girl panties on and get yourself an avatar.
You have so many wonderful photos of Mathews, there must be one that you could use to show the real YOU.

I drove a yellow pinto. It got 43 miles per gallon. It wasn't pretty to look at, but it represented FREEDOM! MY freedom!

We met at Li'l Shopper and planned our evening from there.

New Kent was our biggest rival back in the day. There was NEVER an empty seat at a football or basketball game when our teams met for a showdown.

Thanks for the memories :)

mpm - That's a good name for it, morse code. Mathews County Morse Code is what it really is....I don't even know if they did this in Gloucester or Middlesex, our neighboring counties.

kd - We didn't (and still don't) have a traffic light (except the one when the bridge opens up to keep you from driving into the water). I'm going in just a minute to check out your picture.

bn - I agree and I've actually toyed with loading up a picture, one of my favorite ones of the beach, but every time I try it takes so doggone long that I usually get frustrated and give up. I'll work on being more patient....

bhe - I am envious of your yellow pinto. I loved those cars. We were a VW family. I got stuck driving a lime green van. The only thing cool about it was the air blowing through the dash even when the vent was off.

The only time I ever use my lights to communicate is when I turn my directional flashers to turn. Ok, maybe a couple of times I've used my emergency flashers when I parked illegally to run in and out of somewhere, or unload stuff.

I love the horn...yep I do. Something about blasting that thing that catches peoples attention.

Hey, GJ and anyone else who uses blogger.com. There is some problem with creating new posts and editing existing ones today. I do not know if it is everyone, but I know it's impacting me and many others on the Help discussion group. Be forewarned - don't create your stuff on blogger, because it won't save. Do it in another application and cut and paste AFTER the problme is resolved...whenever that will be. If you create it on blogger directly and then leave and come back, it will have vanished into thin air. Very frustrating.

I think the Blogger problem might be resolved now.
I just created and edited a few posts and it all seems okay.
Fingers crossed.

This is a confirmation for me, I thought I was the only one who thought Mathews got better with age. It equally confirms my belief that RICHMOND is a CESSPOOL filled with ARROGANT MUTANTS.
Love,
Baby Sis

Not lame at all! We did it too. A car was a MUST. We would drive to either of the two adjacent towns and "cruise" or go to "OIP" (Original Italian Pizza - every podunk town in PA has one of these Mafia-front restaurants and they all make the BEST! PIZZA! EVER!) I often ended up driving b/c my car had a comfier back seat than many of my friends' cars. But our weekends? Totally revolved around cars.

I love this. I remember this.

Oh My - Karen Deborah - did you NOT have a traffic light? Did you grow up in my county in PA? Because WE did not have any traffic lights in my WHOLE ENTIRE COUNTY! And we were PROUD OF IT! In fact,the very first one is being discussed at the present time. People have died at the intersection in question, so it will most likely happen... but not without a protest from the "but we don't have traffic lights here" contingent.

My Mom used to have a Tastee Freeze in Clarion, Pa. She worked there I think. She always told us about it when we were little.

Does anyone still drive up and down the road on Friday nights? What a fun thing to do : )!

BabySis - PLEASE move back here and let Richmond go. Mathews is the last frontier. Enjoy it with your niece, nephew, older sister and parents while you can. You won't regret it.

Soup - I always ended up driving the vehicle, no matter whose vehicle it was. And we have the exact same "we don't want or need a traffic light no matter what" debate.

Rebeckah - I loved our tastee freeze, it was the best. I don't know what Today's Youth are doing for fun, and that's probably a good thing, but I do know that the days of ridin' up and down the road all night long are no longer--with good reason. The less I know the better since I have a son fast approaching the driving age.

On the topic of waving in Mathews.... I used to love to drive my Daddy's truck because EVERYBODY waved at him. I very much enjoyed the confused looks when they saw me at the wheel.

Nowadays the confused looks are for a different reason (because he's passed on -- but I still have the truck!), but no less enjoyable.

So when you see me cruise by in a silver and blue 1990 Chevy Scottsdale pick-up, please wave.

PS you've got to love a man who buys a new truck (I graduated from MHS in '90) and peels off his "Proud Parent of an Honor Student" bumper sticker from the old truck and TAPES it to the new truck bumper! My Daddy was a little strange, but I may never again find anyone in this life who loves me as much -- and in the end that's all that matters! Have a great weekend!

I too had a blue pinto. I was so proud of that thing. I worked and bought it myself. It was freedom. I loved pulling up to the Tastee Freeze in it. Next door was Payne's Tastee Freeze. She had the best barbeque you ever ate in your life. Her coleslaw was home-made also. I still crave for those things. It saddens me to think our children will never know these things in life. I too remember tapping brakes and flashing headlights. I also remember riding in the green VW bus to the beach.
One time a friend flashed their lights at me. That meant pull over at the nearest stop, which happened to be a church that day. All of a sudden a cop pulled in there with his lights flashing. He wanted to give my friend a ticket for obstructing justice. He said that he was warning me of a cop up ahead. We were appalled. We got out of the ticket, though. That is another Mathews story. How to get out of getting tickets from cops. I'm sure CBW can tell some stories about this topic.