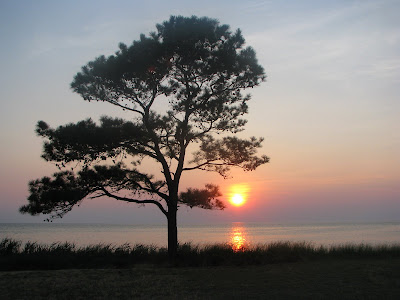 I'm tossing this picture up (taken on our camping adventure this summer on the Eastern Shore) because I am in denial about the wind whipping outside and the dire prediction of rain (accompanied by flooding) for days on end at a time. They're calling for rain so severe there is already a 2-hour delay for school tomorrow. And thus far nary a drop of rain has fallen.

I decided a long time ago that I would never listen to--or rather count on--a weather forecast again, because nine times out of ten if we just played Spin the Bottle we'd end up on a forecast as reliable as anything the weathermen (or weatherwomen) predicted.

The other night, however, my mother mentioned that Daddy was getting gas for generators because a massive Nor'Easter was blowin' in. This caught my attention.

You see, when local knowledge is combined with modern technology, there's usually a darn good chance that whatever they say is comin', is a' comin'. When the locals start getting nervous, then I start paying attention. (By the way, I'm a local. However, I have not yet learned how to forecast a Nor'Easter using clues from anything other than radio or television.)

Today, a day with no rain, the wind has been so fierce it would knock you over. The tide is so daggone high I will soon be able to do a swan dive out of my back door into 5 feet of water. And I'll have white caps in the back yard. Rain is supposed to start tomorrow.

If you don't hear from me for a while, it's because we've lost current or else I'm drifting over to Cape Charles because we've been deluged by the rain and high tides, which have swept us out to sea.

I am building you an ark.

Hey CBW, it's Soupy Meg's husband Curt. Great blog, I love to read it when I can. Hope you don't lose "current!" Great phrase. Amazing photos!

Missing the OBx beach and hope you still have your sippy cup.
Curt

Stay safe and make sure everyone has their floaties on before turning in tonight.

You have a sippy cup?

We are having the same dire warnings on the Connecticut shore. I think the tides are very high now because of the equinox. Hold on! Make sure you have plenty of provisions. Like wine.

tsannie - I need an ark, but please leave the animals out. I already have six cats and a dog driving me absolutely nuts (it's not a far drive).

Curt - Hey there. I'm glad you enjoy reading this hot air. Yes, I miss the OBX too - I DO still have my sippy cup!

GJ - I had written about a sippy cup prior to meeting Soup/Meg in North Carolina, and she had one ready for me the day I met her. Floaties are a great idea.

MPM - I'm making a run here shortly to ensure we have everything we need, which you know includes wine. Good luck and hope you don't get it too bad up there.

The tide now is already way higher than when Tropical Storm Hanna came through, and the winds are really picking up. I've got to do my blog reading now before we lose current.....

CBW - wow, seriously? You'll have to give us the play by play! My weather nerd husband is watching this one closely and I mentioned to him that you had posted they were calling it a Nor' Easter. Here, they're just saying wind and rain. Meh.

I don't remember if I told Curt that y'all call it "current" or that my grandma did, too. I wonder if they use that phrase in CenPenn, or is it too far north.

Bust out your Wellies, it's gonna be a wet day!

Well, the photo is beautiful. I hope you don't get the storm, but I'm afraid you just might. Even up here in NJ we've had terrific winds, and they are saying the rain is coming today. We'll see.

Lovely photo! Hope the storm isn't as bad as they are saying. Stay safe. Really, really hope you keep your internet!

I didn't hear you screaming yet! We are supposed to be getting torrential downfalls as well and the sky is blue and cloudless : ). Who knows!

CBW, im not sure how up to date u are tech wise, but it sounds to me u would do well with a smart phone. phone, internet, e-mail all in one little hand held device.

Soup - It's officially pouring here now. The winds aren't as bad (thus far) as the tropical storm, but the tide is much higher.

bobbie - It's coming your way. We had that wind yesterday.

Rebeckah - You'll hear me scream after the storm is over and I go out to check on the boat. I have a feeling all I'm going to see is the top of it, the rest will be submerged.

donny - I am so far behind the times I still climb up a telephone pole to make a call. I would love to get a laptop and have verizon handle my internet access, however for now I am on dial-up and dependent on electricity. I do have a fairly complex cell phone, and for all I know I could be doing this via that, but I will need to get my 13-year-old to show me how to do that. (It's pitiful.)

Stay safe my friend. If you need to seek refuge, drive on up to Casa de Envy. I have wine...

Are the Mathews animals lining up two by two in front of your house yet?
Stay safe.

Bear Naked
I can assure you all animals within the vicinity ( meaning STATE of VA ) will be well taken care of during this and all storms. Now, if I showed up at the door, I would be put on the "waiting list" for an available space, while all of the following would be tucked in, safely and soundly, in a bedroom or tent, with food, water, down comforters, and soft music:
1. Canadian Geese
2. Ducks
3. Cats
4. Dogs
5. Herons ( move to top )
6. Frogs
7. anything that squawks, moos, oinks, cacaws, squeels, moves.

Love,
Baby Sis
(p.s. just kidding I love my parents dearly and they always put us first, but we do have to share space when we visit!)

With any luck the storm will improve your various infestations.

Also? I should have dropped in earlier. How can anyone post after a screen name like The Incredible Woody? ;)

Just to clarify what Baby Sis said, it is our mother who would have all the animals tended to as first priority over humans. Baby Sis would not have to fight for couch space here in my house, nor would she have to wait in line for food after cats and dogs as might occur next door....for example.

I can't wait to see how many fiddler crabs are displaced by this storm. If just one ends up in my garage, which has happened after previous storms, well it just isn't gonna be pretty.

I am just going to sit here for a while, with my glass of wine, and stare at that photo.