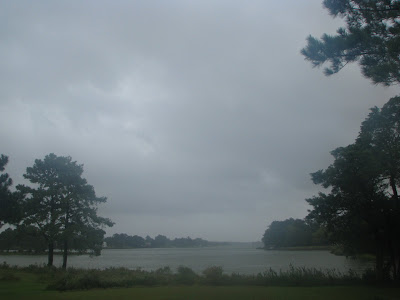 This is a view of the creek during the early part of the storm....
Below is a shot (same view, ever-so-slightly zoomed in) just after the storm. 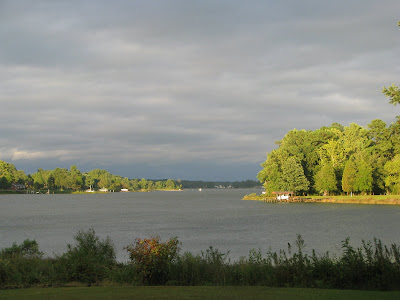 Tropical Storm Hanna, while not the huge weather event we expected, was just bad enough to cancel one of my favorite things: Mathews Market Days.

The food is great, did I mention that?

There are three things I love about Market Days, and this time I am not going to mention the french fries, funnel cakes and kettle corn. Seriously, I’m not.

No, the three things I love about Market Days are the rides, the Saturday night street dance, and the opportunity to see old friends.

My children love the rides, even though quite honestly they are not the most sophisticated—or fun--rides in the world….There’s usually a scrambler, a swirling strawberry (and why in the world any human being would pay money to get dizzy in a swirling strawberry is beyond me), a slide, a moon bounce and some swings. They’re those rides operated by folks who look like they’ve just been released –or escaped from—jail. Not that there’s anything wrong with that. Well, escaping from jail is bad, but I have nothing against newly-released prisoners, it just seems odd to me that these rides tend to attract convicted felons who evidently haven’t seen a dentist in a decade or more. Not that I am one to talk about being a frequent visitor to the dentist. And to be clear, I have nothing against convicted felons. I do, however, have an issue or two with dentists. Big issues. But of course this has absolutely nothing to do with what I was originally talking about.

The rides are great, but the most fun to me is the Saturday night street dance, or as my little sister calls it, the barn dance, even though it is not held in a barn, and there is no barn anywhere in a 2-mile radius. There are characters there who look like they should be in a barn, but this is not a barn dance. They block off the street and people mill around or sit and listen to music. This is where I usually see people I haven’t seen in a month of Sundays, which in case you didn’t know is a long time, and so much longer than a month of Mondays or Thursdays, for example.

This year, the storm cancelled all of Saturday’s festivities and sufficiently deterred vendors and attendees on Friday, even though the weather was cooperating. I went for a bit Friday morning, but it just didn’t feel the same. Little Sister drove here all the way from Richmond for the so-called barn dance that never happened.

Oh, and the worst part of all? Most of The Food People who normally line up and down the street didn’t show up because of the probability of rain.

So here I sit with no kettle corn, no french fries and no funnel cakes. No iced tea, no barbecue, no swirling strawberries, and no barn dance. I do still have a Baby Sister hanging around though. I think I'll go aggravate her.

There's always the Urbanna Oyster Festival in November. Guess I'll get my french fries and barn dance then.
Posted by Chesapeake Bay Woman at 3:43 PM

I am glad you were safe and sound...those market days sound like alot of fun. Remind me next year!!! Yum, funnel cakes!

Oh, it sounds like it is such a fun event! I am sorry that the storm made it less than wonderful this year. I am desperately sorry that the kettle corn and funnel cakes weren't available. That is TRAGIC : )! The pictures are very pretty though.

Oh we had the Oyster Festival this past weekend. Hanna put the kabash Saturday's festivities, but yesterday was beautiful. We had to finish up our storm provisions; ie: wine. It was fun.

...Oh girl, you're killing me here with the mention of funnel cakes and kettle corn. I so want some...now. lol... :oP

...Glad that you all are safe and sound! If you and lil' sis are still dyin' to 'cut the rug' you could always go out in the yard and do a little jig with the fiddler crabs...lol... I'm sure they're more than happy to oblige... ;o)

...Anyway, have a happy Monday!

LOTS & Rebeckah - Thanks. It's always the first weekend after Labor Day. I fully intend on making up for missed funnel cakes and french fries at the Oyster Festival, which I've not attended in far too long.

MPM - I'm glad you at least had part of the weekend to partake of the oysters, etc. Ours isn't until November, and I am definitely gonna make up for lost time.

tj - Baby Sis would be too afraid of fiddler crabs to dance in their midst, but I see it as a good opportunity to smash their little brains out, not that I am violent or anything. Grand idea!

Have a good one, everyone. -cbw

As MPM beat me saying, our Oyster Fest was done in on Saturday - they cancelled the entire day. Sunday, tho, was a gift of a day. Another storm weathered!
Oh, and we finished every drop of the wine....at several different establishments, MPM, jules and I did!

bear - A funnel cake is like a frisbee of a doughnut. It's fried dough sprinkled with confectioner's sugar. There is not one ounce of anything good for you in it, but it sure does taste good.

Soup - You should head south for the Oyster Festival in Urbanna in November. Tons of good eating.

tsannie - Glad you at least got one good day of Festivizing in. Sounds like a good time. -cbw

You got some good photos!

Thanks for sharing them .


(in case you stopped by recently, my blog is now back to public viewing after it being down for a week)
Chow.

Reminds me of Cape Elizabeth Family Fun Days....good thing you already covered the french fries and funnel cakes, 'cause I could go on forever.

Hanna drenched us as well, and knocked out power several times resulting in frying our dryer which was ONLY a year old, and a BRAND NEW DVD PLAYER! Grrrrr. Worst of all though, BNAS held it's annual and final air show (its among the bases being "decommissioned") a and for the most part, none of the jets, including the Blue Angels or the Eagle could go up...just the small stunt planes. Was a total bust. :-(

At least I got some pretty nice shots of practice runs the two days before the show. Living as close as we do, I can sit on my back deck and click away.

Glad to hear Hanna wasn't as bad as expected in your neck of the woods.

Don't feel alienated, Bear -- I'm a card-carrying American who has never seen or tasted a funnel cake, and had pictured them as long and thin. Guess those are churros (which I've never had, either).

Gotta take the girls to a fall festival this year, since we missed out last fall.

I stole your post-storm photo, CBW. It's a winner.

Such a shame. It sounds like so much fun that it's really too bad that so many people pooped out. I love kettle corn like there's no tomorrow when I'm eating it, so I really feel your pain.