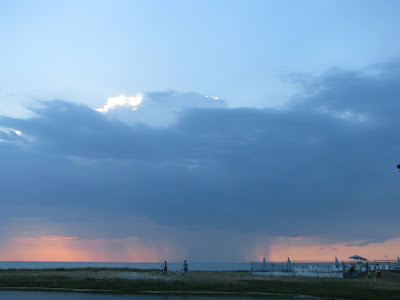 I took this picture on our camping "vacation" over on the Eastern Shore of the Chesapeake Bay earlier this summer. What you see in the blue off in the distance is a storm that was moving up the western shore of the bay, but which never hit us. The Unpredicted Storm of the Century ended up hitting us later in the week. Stuff like that tends to happen to me on vacation, and, generally speaking, in all parts of my life. My life is one unpredicted storm after another.

Tropical Storm Hanna is supposed to make her mark starting this evening and extending into Saturday. They (whoever "they" is) say we can expect wind gusts from 40-50 mph, power outages and flooding. This really isn't any different from any other nor'easter that we get, except we have a little advance notice.

Of course because "they" are predicting it, that means it won't happen. Except now that Chesapeake Bay Woman has said it won't happen, that translates into The Bottom Will Drop Out of the Bucket That Is The Sky, and we won't have current, aka power, for two weeks. Which means I can't make coffee. Nor can the local convenience stores.

More details and photos to follow, as time and "current" permit.

-cbw
Posted by Chesapeake Bay Woman at 11:49 AM

My grandma called it "current," too. Never occurred to me that it was "funny" until now.

It's now noon on Saturday, and Hannah and maybe Ike are starting here with rain and a little wind. Hopefully, we won't have too much of the latter, but we sure do need the rain!

Still crossing my fingers for all of you but that makes it very difficult to hold my drink.
Someone want to pass me a (paper) straw.

The storm here was not nearly as bad as it could have been; we were very fortunate.

I hope that everyone else in its path fares as well or better.

Hanna is here right now, pissing all over everything and causing the power to go out intermittently. And here I sit, on the computer, waiting to most probably be electrocuted. *lol*

Hanna wreaked havoc with our local airshow today which is disapointing because the air base is closing (being "decomissioned" according to the gummint!) and this will be the last of a local era that has been around for decades. None of the jets flew today and most definitely won't tomorrow.

OK, now I'm really getting off the computer, Hanna must have heard me cause everything is flickering. Again.

Campfire coffee time, I do believe. Oh, and so you know? Because I think you commented on my strange lack of coffee-making appliance?

I now have a butt-kicking coffee maker, courtesy of my mom, who didn't like it.