Of Mice and Mayhem 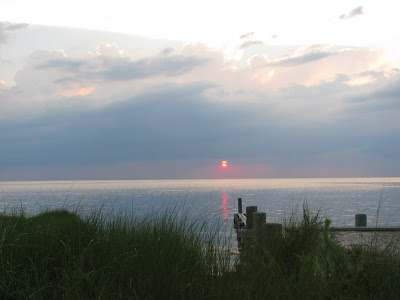 A while back, as in several months ago, I referenced an unfortunate childhood incident relating to a tea party I hosted for my two younger sisters. Below is my mother's perspective on that whole thing. As I recall, my intentions were honorable and very innocent (I was trying to teach them table manners, for example), and everything was fine until Chesapeake Bay Mother arrived on the scene. But I'll let her tell her side. At least for now.
---------------------------
By Chesapeake Bay Woman's Mother

I'm always amazed at the number of times in my life I have actually made a doctor laugh, and we certainly won't go into all of them here, but note that the older the physician, the more absurd it seems, unless of course you're four. I was more like 34 when Dr. Bowles lost it to my excited retelling of the events of the day of The Tea Party.

Let's start at the beginning. For Christmas, the three Chesapeake Bay Children received a table and chairs fashioned after a kitchen suite. It was in the basement where many of their play things had a home, including a china tea set.* I was involved in some meaningless chore,** when I suddenly missed the sounds of Chesapeake Bay Sisters at play--which would often times rival the bellows of a roomful of animals roasting on a spit. Mother had warned me, "If they're quiet, you'd better get movin', because they're up to something!" I rushed downstairs to discover my little dears all sitting at the table and using perfect manners to dine upon.....DECON! Yes, rat poison du jour.

I screamed and scared them into silence, which drove me into more panic. The more I pleaded, the silenter they were. So, Dr. Bowles heard from me. When he stopped laughing, he assured me that they probably didn't eat it, but if they did, etc. etc. And so it was a waiting game.

Well, they lived and so did I, but the day would come when history would see us all ask the question, "To puke or not to puke?" or "Can you make yourself puke without waking Daddy, who is still on the night shift and currently sleeping?"

Chesapeake Bay Oldest Daughter fried sausage and fed it to her sisters.*** I discovered it was not cooked in the middle and immediately assumed they would develop trichinosis (a parasite in undercooked pork) and so, off to vomit we went. All the resulting retching and crying**** did wake Daddy, who red-eyed, tousle-haired and not the least bit pleasant roared, "What the HE## is going on out here?"

What indeed. (CBW added these last two words. I felt it was necessary. I'm sure my mother can tell a story as well as the next person, but sometimes I just have to add stuff to it. I seriously do not have control issues. N.O. spells no, not me. -cbw)

* CBW's Note#1: Actually, the dinner ware was made of tin, not china. China would have been broken to smithereens within two seconds of us laying hands on it. This was a nice tin set of plates with a brown pattern and the daintiest little teacups and saucers you've ever seen. The Decon looked simply exquisite on the plates. I mounded it up just so.

** CBW's Note#2: Mindless chore in this instance was likely my mother watching The Guiding Light, followed by Match Game 76, while Chesapeake Bay Child babysat her two younger sisters. I was practicing cooking and serving them dinner, which was something I would need to know in the days,months and years to come. I was left to teach myself. See Note #3

*** CBW's Note #3: Yeah, I was left to teach myself how to cook, and I was so starved to death I broke open a roll of pork sausage ready to eat it right out the package but instead fried it up to a very crispy blackened outside only to find it medium rare on the inside. I saw no problem with it and enjoyed it immensely. I did not,however, enjoy retching in the back yard for no good reason.

****CBW's Note #4: I can assure you this was Middle Sister crying. I just know it. I can guarantee I wasn't crying over this whole thing. I thought the darn sausage tasted just fine and saw the entire exercise as useless and a huge waste of time and Night-Shift-Working-Daddy's precious sleep.

I would like it noted for the record that my cooking skills have greatly improved since these first attempts at hosting dinners. My table manners haven't, but at least I'm not serving up rat poison or raw pork anymore. I did eat some undercooked chicken once but I didn't make it.

Nor did I get sick, thank you very much.
Posted by Chesapeake Bay Woman at 8:02 PM

What a hoot CBM is! I love the selected memory and the different versions.

It's not exclusive to your family, believe me!!

That photo is so beautiful.

Rat poison? Oh my gosh! I am so glad she came downstairs to check on you! Your tea set sounds nice. I don't think my sister and I ever had one. PS I am glad you learned how to cook things all the way thru now! WAY TO GO : )!

...(Note to self: If ever blessed to be able to visit CBW in person - graciously decline any food offerings.:o)

...Hello CBW & CBMom, great story and wonderfully told too! It's a shame you can't scan/upload a photo of the three of you as children on here. Gosh, the visuals I get...lol... ;o)

...Thanks for the laughs you two!

...Oh, and btw, that photo is beautiful CBW! Looking at that and I get this overwhelming need to to don a swimming suit, run like the dickens and jump!...lol... :o)

The photo is gorgeous!

that said...
Thanks for starting my day with a good laugh. I've been in similar situations - myself as a child, and my children years later. I suppose we all have. But it's oh so funny to picture, and to remember. Thank God no one actually ate the rat poison!

I love this photo and it was a great story.

"to vomit or not to vomit." I remember those debates my mother had on the phone with some far-flung advisor;) It was always for my hideous younger brother, though.

Um, when I come visit, can we eat out?

I just realized that I have a LOOONNNGG history of trusting people WAAAAY too much.
Love,
Baby Sis ( who is STILL dead from the neck up, due to undercooked meats and rat poison consumption)

This sounds exactly like what happens every time I have attempted to cook anything in the Kitchen.

Thank you all for your kind words. I have to confess that I wasn't really sure about that picture because, well, just because it really didn't jump out at me or do anything for me. I put it up because I couldn't find anything better at the time. I am overdue to take more pictures, simply because I am too undisciplined to go back through the thousands I've already taken and organize them in any fashion.

I appreciate all your comments so much. It warms my soul to come home from an awful day read these.

And to all of you potential visitors-- and all of you have a standing invitation-- we'll split the difference. Half eating out and half CBW's cooking. I promise nobody will have to use syrup of ipecap at any time during your visit.

I came back to check the comments and was floored to see that I hadn't left one! Well, smack me upside the head, because this was PAINFULLY funny. I'm just glad the situation didn't get more painful and less funny, however.

Thanks as always for the laughs!