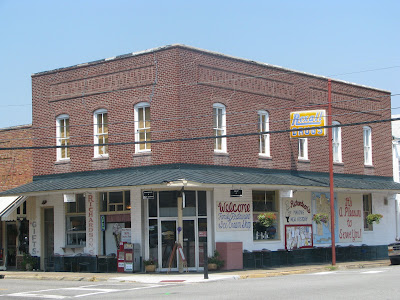 This is a picture of Richardson's Drug Store (currently a restaurant), at the corner of Main and Church Streets in Mathews Court House. My mother fell down in the street just a little bit to the left of this picture. She was almost run over by a Bay Transit bus loaded with senior citizens. If you haven't read that story yet, click on Falling Down in the August archives.

Everyone from Mathews has a story about Richardson's Drug Store, and if they don't, there's something wrong or they've lived under a rock their entire life. (Never mind the fact that having something wrong with you and living a sheltered life actually describes many people--including yours truly--who live in Mathews. That detracts from the point I'm trying to make. And I'm not sure I really know what that ever was.)

Richardson's has been around forever and is an institution in Mathews. It is the embodiment of nostalgia.

My memories revolve around bar stools and fountain drinks. You could sit at the counter on a stool and swirl around while waiting for your Pink Lady to arrive. Yes, swirl. I love that word. You could swirl and swirl until you became dizzy. Or until your mother told you to stop and act like you have some sense.

Oh, I loved those Pink Ladies. I have no idea what was in them, but it was like drinking nectar, it was heaven in a glass. I am reasonably sure there was a great deal of sugar involved. Those were the days before everything we ingested was infused with high fructose corn syrup. However, it was not before the days of Pixie Stix, which consisted of this: pure cane sugar, plus more sugar, then 100% sugar, and an unhealthy amount of red dye #2. Who knew red dye #2 could taste so good? And how could something that tastes so good be so bad?

I also remember paper straws. Yes,there was such a thing as straws that were not plastic. There was also such a thing as milk delivered in glass bottles, eggs purchased at the local farm, party lines on telephones and a stegosaurus that ran wild throughout the county.

Besides paper straws, swirling counter stools and Pink Ladies, I also loved the tile floor in Richardson's. Why on Earth a child would fixate on a tile floor is beyond me, but I did. The exact same floor still exists today - white with blue designs scattered throughout.

I can hardly mention Richardsons Drug Store without mentioning Mr. Clarke Richardson, a gregarious sort who ran the place when I was coming along. He was a character as flavorful as the many and varied drinks served up at that counter. He was usually in the back, in the actual drug store part, and I remember he always wore a hat of some sort.

Today Richardsons is a very popular place to eat in the Court House. Although the paper straws have gone by the way side, the counter, those swirling stools and the tile floor still remain.

Alas, the stegosaurus died a while back, but otherwise not much has changed.

I like that.
Posted by Chesapeake Bay Woman at 6:00 PM

I would have loved that because it sounds a lot like the lunch counter at Woolworths, back when they had them. I haven't seen a Woolworths in decades. I have seen milk in glass bottles but not with the cream settling at the top, so you had to shake it to mix it in, or if your parents weren't looking just drink it right off the top.
I bet they have good food at Richardson's!

Oh yes the best section of soda fountains were the swirling stools.
And the chocolate milk shakes made in the silver blender thing.
I can hear the noise in my mind now. I swear I almost can smell it also.
Yumm!

So, are you ready to hunker down this weekend? I hope you guys are safe and don't suffer any damage. I am a big fan of the old soda fountains and swirly chairs. I always got a grilled cheese with fries and a cheery coke from our Woolworth's...I miss it.

Ah the swirling stools! Ours was called Sandlin Drugs. I ate a pimento cheese sandwich and then had their lemon ice box pie for dessert. Oh, and the paper straws! Ack. The memories! Great post. I think we may still have a stegosaurus running around the place...

We are bracing for a storm...40-50mps winds, flooding and power outages expected, starting tonight and into tomorrow. If I don't post for a few days, that's why.

GJ - Enjoy your cruise. I remember Woolworths although we had to drive an hour or more to get to one.

BN-I forgot about the milkshakes - they were outstanding. They actually still make these in the restaurant that occupies the building and they use what looks to be one of the original "milkshake makers" (which is a technical term they toss about in the restaurant industry).

lots - Yes, we are bracing. I stocked up on the bare essentials, most of which involve water and other beverages. There is not a single batter to be found anywhere in Mathews County. I hope you all are safe and sound as well.

MPM - As a kid I would not have touched pimento cheese with a twenty-foot pole, but today I could eat a tub of it and still be looking around for more. Good stuff, though high in fat, which I would not have had to worry about as a kid -of course when I didn't like it--but do now that I'm older.

Have a great weekend, everyone.

CBW
Here all along I have been calling *milkshake makers* by the incorrect terminology.
Who knew silver blender thingie was not correct?
Stay safe and secure from the oncoming storm. I'll be thinking about all of you on the right hand coast.

...Hey Miss CBW, I hope you're doing okay. Heard about the storms and was gettin' worried and I just hope that you and your family are safe. I'm sendin' a prayer your way... :o)

...Yeah, I loved paper straws. And remember how you chewed on them as you were drinking your drink? The ends of 'em would get closed up and get all ate up looking...lol... Oh and Pixie Sticks - yum! Remember those candy necklaces? And candy cigarettes? Gosh, can you imagine something like that being sold today? Pray tell... ;o)

That drink sounds divine! I just love (LOVE, love, LOVE!) swirly stools. There was a five and dime near where we lived when I was little but they didn't serve food anymore and they didn't have swirly seats. I heard they did before I was born though. Very nice story. I am glad the tiles are still intact. They sound terrific : )! P.S. There is a dairy near our house that still sells milk in glass jars. I love that too!

bn - I think your term was closer to correct...sometimes I just make stuff up, but I'm sure you hadn't noticed!

tj - That is one of my most vivid memories of the paper straws - the ends being chewed shut. I loved candy necklaces...and cigarettes (even though I never smoked as an adult, and I do remember people saying OH GOD NO, DON'T LET YOUR CHILD EAT THE CANDY CIGARETTES IT WILL ENCOURAGE THEM TO SMOKE. Nope. Didn't happen.)

Rebeckah - I'd pay good money to have milk from a glass jar. Sort of like Pepsi from a glass bottle poured into crushed ice in a paper cup.

Thank you all for stopping by and for wishing us well. We've weathered worse, although don't be surprised if "current" goes out and you don't hear from me/us for a few days. Otherwise, we'll be fine. (The boat? Not so much.)

Have a fantastic weekend.

I wish I could be there for the storm; they are so beautiful there. I remember sitting upstairs in the attic of our grandparents' home and watching. And I love seeing the tide get high and the wind blow like crazy. It's not the same where I am.....

Pinke Ladies have REAL, fresh squeezed lime juice, sprite and grenadine in them, if I remember correctly!! YUMMY....

Middle Sis - That's my favorite part of a storm is sitting in the living room facing the creek, watching it all blow in. The tide is already rising, although there is some question as to how bad it's gonna get now.

Hope y'all make out OK down your neck of the woods. love ya - cbw

Next time you're in there, can you take pictures of the swirly stools and the blue tiles and post them? I would love to see them. I know it might not seem that exciting to do, since it wouldn't involve trespassing (hee hee), but it would be really fun to see. ;)

limeades were my favorite..

and he always wore a red hat.

as Bob Hope would say, thanks for the memories!

AMNRITSOR
anonymous mathews native residing in the suburbs of richmond

mt - I'm not really good at photographing anything other than landscapes, and even that is debatable, but if I can get inside Richardsons and take a meaningful picture, I will.

AMNRITSOR - The limeades were awesome, and I'm so glad you remember the red hat. Before too long nobody will remember the way it was..thank you for contributing to this project that hopefully will be around long after we're all gone.
- cbw

I second the motion to get photos inside Richardson's, please. May I suggest drive-by photography? It doesn't work worth a damn, but it quickly becomes a challenge you can't ignore, and eventually someone from Richardson's will take pity on you and throw the doors open wide when they see you coming. Should help you get a shot of the interior.

I'm late to say "be safe" during the storm, but I hope your property did okay.

hahaha...i bought my dad like 3 watches from there for fathers day gifts. and is the ol' dollar general still right across the street?

Anonymous - We have a new and improved Dollar General! It's no longer across the street, but it is in a newer commercial part of Mathews....if you're coming into the court house from Best Value, instead of turning right at the stop sign, you keep straight. DG is on the right. Newer, bigger and better than ever. I love Dolllar General.

Paper straws, solo cups, Mary behind the counter, Mr. Richardson always running around the store in a hurry.

I frequented Richardson's most frequently after school at Mathews Intermediate..I have memories of a friend of mine often pulling one of those paper straws out of the glass dispenser...the ones with the shiny metal top and the metal rod that extended down into the jar. Lifting the lid raised all the straws into easy reach. This friend would frequently do his part as an early advocate of recycling by placing his used paper straw neatly back into the jar....