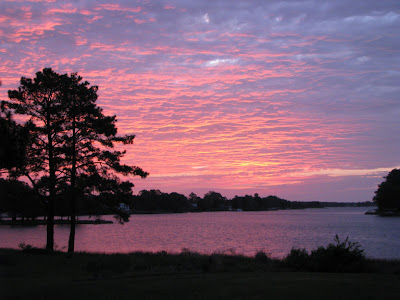 Yesterday, while hundreds thousands of bicyclists enjoyed the perfect riding conditions in Mathews, I attempted to complete some chores.

It was a valiant but ever so futile effort.

First, I awoke to ants carrying me out of the house the battery on my tractor was dead even though it was just replaced. That is my fault, and it's a long story.

Second, after jump starting the tractor, some spring on the mower deck broke. So the grass, which is currently chin high to a giraffe, was not cut.

But wait, before all this, I managed to sink a boat trailer in creek mud. True story. For another day.

Just about the time I was up to my kneecaps in fiddler crabs creek mud, which has the bouquet of a dead skunk, I was informed that I needed to be in Gloucester to pick up Chesapeake Bay Son from his 8th grade trip. Fifteen minutes ago chop-chop!

I was already late to pick up Chesapeake Bay Daughter from No Man's Land Bohannon, which is a day trip in and of itself. Also, I had creek mud caked to my legs and ants between my teeth.

To expedite the conclusion of this post, I'll resort to bullets, which wouldn't be the first time in the past 24 hours I've considered using them:

-cut my gloveless hands weeding flower weed beds;
-dragged push mower out of garage, more difficult than it sounds given that it was lodged between a generator, an empty oil barrel and an organ. Yes, an organ. Like a piano only an organ. In my garage. Would somebody please take it? Anyone?
-push mower would not start.
-tried to clean kitchen while ants had a pool party in the ponds of Terro poison which now coats my digestive tract my windowsills, doorways, floors and counter tops
-discovered that garbage disposal does not work, and stuffing more scraps down in there does not improve the matter
-cooked supper for famished children while hosting an ant fiesta on my kitchen counters.
-threw in the towel, put on a sombrero and did a cannonball in the Terro pool.

Hopefully you had a great weekend.

If I haven't said it recently, I'd kill for a long, long vacation far away from here.

But I'll settle for a lawn mower that works.
Posted by Chesapeake Bay Woman at 12:01 AM

Wow. That sounds like some day... I feel for you with the photo editing! That is such a tiresome job! If anyone can do it though, I know it is you : )

If I lived closer, please know that I would come over and cut your grass. No, wait. I don't have a mower. Well then I would come over and edit photos for you. That's something I actually know how to do. Or weed. And I would bring my friend the exterminator. Well, he's not really my friend, but he is a co-worker. He's the A.D. at our school and he also has a pest exterminator business.

Hope today is better for you.

Gah. Wine One One call was needed.

I, too, would have placed a collect call to Wine One One. Sometimes there's no other answer.

If only you could get the crabs to cut the grass with their little scissor claws! I will weed for you anytime. I can also help you get boat trailers stuck in the mud. Maybe call wine one one and tell them to bring the tanker truck?
I'm sorry that all things went wrong but you got the children home, that is what matters the most!
Raining here, bikers in wet lycra kinda glow:)

Sitting here watching Survivor and Evil Russell is guaranteed a spot in the Final Three. I can't stand this guy but damn, he can play the game.

And hey, Mathews Mark is back. Where in the heck has he been?!

LWK-You are always so encouraging, thank you. Even if I can't edit photos your words make me feel better about not being able to. If that makes any sense...

Pueblo Girl-Yes, somehow I know you understand. About the only thing I have going for me around here maintenance-wise is that at least I haven't had multiple cars run into my house as you have. That's incredible.

CG-Thank you for the offer, and I know you'd do it too.

MEg-YES, an organ. Do you want it?

Mathews Mark - HOORAY! Thanks for calling and for helping me with these disasters. Glad to have you back on-line and can't wait for the field trips in the coming weeks.

deborah - You are a genius, and I think you're onto something with the crabs and the grass cutting, not to be confused with crab grass which is another beast entirely...

CG-I spoke to him tonight and he's back on line, ready to go.

Have a great week, everyone.

Hey, what a GORGEOUS PHOTO....Love it!

and I hope the week will be kind to you.

Me, I now have another blood clot! GRRR!!!

Was I the only one who heard
"somebody snitched on me"
between each one of those torments?

Just kidding. Hope you got things squared away and were able to relax a little.

OH CRAP! THE WEEDLS HAVE GROWN INTO MY COMPUTER! AHHHHHHHHHHH!