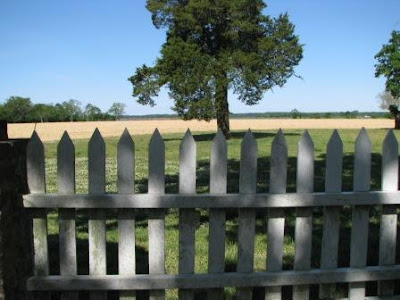 This is the view from Eyre Hall's formal garden looking towards Cherrystone Creek. This is the real Eyre Hall, not to be confused with the other Eyre Hall another stately mansion nearby.

For details on this other lovely mansion that was definitely not Eyre Hall, see yesterday's post, where Chesapeake Bay Woman trespasses spends half a day frolicking with wild horses while wandering aimlessly around someone's exquisite property.

Here's what the main house looks like. As you can see it is immaculately maintained, which was one clue that I was in the right place.
(The other clue was a sign with an arrow pointing to the gardens.) 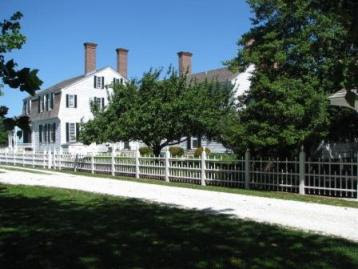 The colonial-era house is surrounded by an oyster shell driveway, white fences, numerous adorable outbuildings and one absolutely stunning garden loaded with huge boxwoods just brimming with that smell that lets you know you're stepping back in time.

Much to my surprise, the ruins of an old brick building stood just outside the gardens, facing the water near the Eyre family cemetery--which contains graves dating back to the 1700s.

Note: My hasty editing ruined/blurred this particular shot of the remains of a structure known as the orangery: 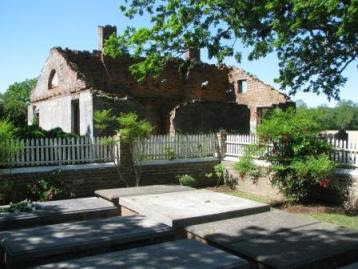 (a) how on Earth I knew this was called an orangery;
(b) what on Earth an orangery is;
(c) why on Earth you should do anything but fall asleep right now; but also
(d) how many times CBW can say the word "orangery" in one post,

the short answer comes from Wikipedia. Evidently an orangery is a greenhouse or conservatory found in certain 17th-19th century houses:

"The orangery, however, was not just a greenhouse but a symbol of prestige and wealth and a feature of the garden, in the same way as a summer house, folly or "Grecian temple". Owners would conduct their guests there on tours of the garden to admire not only the fruits within but the architecture without. Often the orangery would contain fountains, grottoes, and an area in which to entertain in inclement weather."

Thank you, Wikipedia. Is anyone still awake?

Below is another glance towards the creek from one of the Parthenon's windows the orangery's windows.

Orangery might be my new favorite word. May I bring you a blanket or pillow? 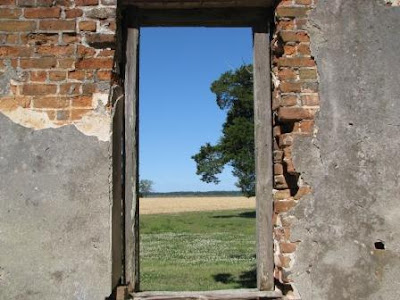 And here's a glimpse of those gorgeous boxwoods with that heavy, earthy, intoxicating smell. The garden was one big maze of boxwoods surrounding mini secret gardens, loaded with flowers and exotic plants, and benches sprinkled throughout. I could spend an eternity just sitting and absorbing the sights and smells of this place. 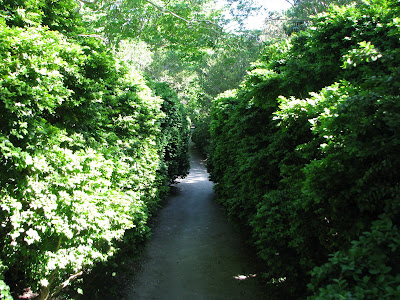 For a little more background on Eyre Hall, my BFF Wikipedia says this:

"The property where Eyre Hall is located was first patented to the three sons of Thomas Eyre I in 1668 and included 1,600 acres. A 700 acre tract was purchased by Littleton Eyre, a great grandson of Thomas, in 1754 with the purpose to build a family seat and a working plantation. The original structure built in 1760 was a 41-foot-square structure and was a 2 1/2 story wooden home.

The property grew periodically over the years too, as a a dairy was built in 1760 and a smokehouse was built around 1806. The house is surrounded by boxwood gardens, and formal lawns and fields that melt away into the Cherrystone Creek. On the grounds is also a walled garden from the 1800s, the Eyre family cemetery, and the ruins of an orangery from 1819."

Am I the only person who is still awake? had never heard of an orangery?

But, didn't EVERYONE grow up with an orangery in their grounds? I know I did.....

The real Eyre Hall was lovely... but I think I liked the other one more.

Also? I did EEK at the mouse, but only slightly. This morning's task? Bigger mousetraps. Heh, heh.

Did you know there was a huge Orangery at Versailles.... hey I get around!

Silly Goose--isn't there an Orangery at Monticello? Right off his library? Beautiful place, BTW.

Thank goodness for CBW & Wikipedia or I'd never know what an orangery was or get my morning nap! I'm kidding about the nap! I don't always comment but I always read AND enjoy your tours! You could charge money for this;-)

I am awake AND have never heard of an orangery! I do love the photos of the real place but I miss the horses . . .

Thanks to you, I'm now adding 'orangery' to my list of favorite words ... it hasn't displaced 'twinkle' though.

I know where I'm going the next time I'm on the Eastern shore.
Connie

I'm with Trisha - I miss the horses! While the "real" Eyre Hall is lovely, I have to admit to enjoying the daredevil trespassing at the other house. =)

I'm from the west. We grow oranges around here. I've never heard of an orangery. If I had to guess what one is, I'd guess that it's where sweaty people sort oranges into crates and swear under their breath at the boss. Good thing I don't have to guess.

NOT asleep, by the way. Never.

What a lovely place! I don't know what an orangery is and I am still waiting for someone to bring me a blanket and a pillow, please, kthxbye.

Mrs. F. - We didn't know what oranges (much less orangeries) were around here until Food Lion came to town, but I won't rule out that some of our older estates may have had orangeries...Yes, I liked yesterday's house much better than this one. The pictures don't even begin to do yesterday's house justice - it was massive and gorgeous. Speaking of massive, I think it's time to upgrade to a new level of rodent warfare: rat poisoning. It got whatever was living in my attic to be quiet. Dead quiet, only I've not gone looking for the body. What I don't hear and see won't hurt me.

MPM-I've been to Monticello three times and don't remember the word orangery, but that means nothing because I don't remember anything about anything. Let's just say that each year after having children I've lost more and more brain cells such that by the time Blog Fest rolls around, I'll be propped up in a corner with drool running down my chin. Just toss me some wine and potato chips every now and then and I'll be happy.

Linda- This is a full-service blog: we educate, we strive to entertain and we allow you to catch 40 winks all at the same time! Thanks for reading but most of all for commenting - the comments make my day.

Trisha-The horse house was far more impressive than this house, however the gardens here were lovely. I'm going back to the Eastern Shore Memorial Day weekend with my children, so I have another opportunity to go back and wander around...

Connie-Thank you for commenting. And you won't believe this, but twinkle is on my list of favorite words as well. (Actually sometimes I call my cat Twinkle--his real name is Twinkie.) Anyway, do make a trip to Eyre Hall if you're over that way, you won't be sorry.

Breezeway-The horses were very pretty. A little skittish, but pretty. I took at least one picture of the interior of the "other" Eyre Hall (looking through a window) and if I ever have time to upload photos I'll share it and a few others.

Meg-Here's a nice Snuggie for you. I'm passing it through the screen right now so you can continue sitting at your computer while taking your nap. By the way, that comes darn close to describing my work day today.