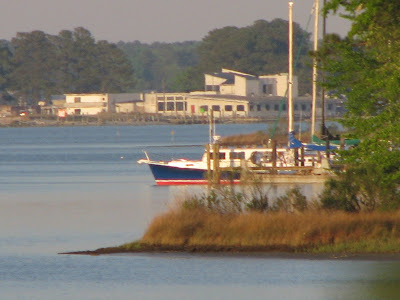 Welcome once again to the day known as Thursday and the post known as a three ring circus Three Thing Thursday, where I share three completely random things, and you do the same, hopefully.

1. The photo above is of the 1970s-era Mathews County Disney World known as the Islander motel, restaurant and marina on Gwynns Island. This magnificent patch of land holds so many memories for so many people. Surely there's a screenplay book just waiting to be written about it all. By the way, I'd like to volunteer to be the person who writes that book screenplay, the day after I successfully clone myself into three or twelve people who would take over my current obligations and responsibilities, which by the way are too many.

2. There's a photo in this week's Gazette Journal (I think it's page 3, upper right corner) of two participants in last weekend's Womanless Beauty Pageant to benefit Relay for Life. I don't care how many times I see those photos, I die laughing. Hysterically.

3. Today I'm driving up to Dewey Beach, Delaware, to meet up with former college roommates Iris and Lenja. Lenja (pronounced LEN-ya), originally from Finland, now lives in the U.K. She flew here just for this mini-reunion (of 3) at Iris's beach house. At a previous Northern Virginia reunion in the 1990s, Lenja backed her parents' station wagon down a hill over a concrete retaining wall such that her rear tire was spinning, suspended in midair, until the nice tow truck man made everything OK. Another time, she fell into the canal in Georgetown, and Iris had to pull her out.

Now it's your turn to share three--or more--things, whatever you want. Anything at all.
Posted by Chesapeake Bay Woman at 12:01 AM

1. I had a weird dream last night about men in pigtails and sporting lacy thongs... thanks

2. I LOVE Thursdays. Between 3-thing thursday, payday and the fact that it's eye candy night at my house... the only thing that could make it more perfect is if I had off on Friday.

3. I am headed down to the wilds of Deltaville for Memorial Day weekend, I can't wait

3. Nice to see family and others, if it weren't for the sad occasion.

1. I am on the fourth, and hopefully last, day of a migraine;

2. I have to get girls to school; boy to chiropractor; dog to vet; self to grocery store, flooring shop, bank, hardware store;

3. I also have to discuss (in French) the new floors (whee!) with the contractor, who is lovely, and speaks not one word of English. I don't even know the words for some of the things we have to discuss IN English. this promises to be ..... interesting. I wonder if I will end up with shiny red lino instead of glowing acacia wood?

wv: dunti. Like a dunce, but worse. How I am feeling today.

1. I found a piece of pretty light blue seaglass this morning. A perfect size for my growing collection that will one day be a surprise gift for the owner of the house I am living in.

2. You write the book, which will become a screen play. I would like to restore/reopen the Islander with the movie that the Movie Studio provides for filming there. And I would like SJP to play me. (I feel like the book should start as a reunion with flashbacks.)

3. How can I have cocktails and dinner with Kelly Ripa? Maybe if she were invited to the next Miss(ter) Mathews Contest.

1. I know you don't watch TV but really, Mrs. Connick Junior, you should have seen your husband during American Idol the past two nights. He was brilliant. *swoon*

2. What happens in Dewey, STAYS in Dewey. Or so I'm told.

3. It is a perfect day to be outside, enjoying an ocean breeze. Sadly, I'll have to live vicariously thorugh you as I type this from my client's office in downtown DC.

1. ToonMan and his cohort Andrew did another fabulous video over at YouTube .. The Titwillow Affair .. check it out

2. This morning after demanding MORE, Jack and Rose both ran insanely around our small living room with Jack YEOWLING as he ran ... I think they liked the Weruva Tuna/Anchovy ...

3. We watched Lost (DVR'd it so we can skip commercials) and I am floored by the loss of Jin and Sun.

1. My sinus infection FINALLY shows signs of getting better...sucks to be sick the ONE week Meg is here before she leaves for the UK and then the middle east!

2. Despite being sick I am just OVER THE MOON HAPPY to have her home and be able to spoil her rotten!

3. I love watching Meg and Gaby together. I just do!

Have a great Thursday CBW...btw, I can't wait to see you this summer!

Meg at the Members Lounge said...

1. Good Lord, I had nightmares about pulling weeds last night. Made for and edgy start to the day.

2. Thrilled little sister and I are escaping to Cape Cod to visit Mom tomorrow.

1. Please, I beg you, post a link to the pictures. I can't find them on line.

2. I'm tired of dispensing food, drink and meds. I'd make a crappy waitress.

3. Why has the paperwork on my desk begun breeding like hamsters? I remember when my aunt's supposedly male hamster gave birth to 18 offspring one night. This launched an impromptu discussion on sex ed with my young nephews who wondered why their dad didn't have babies.

1. Years ago, CBW and I shared a magical slow dance upstairs at the Islander.

2. It kept us going through all the years of marriage and heartbreak and stress and children.

3. It is worthy of it's own blog, maybe this summer we will release it.

1. I met a girl walking a striped dog..that is right, it was striped.. black and brown stripes. Taking pictures of it tomorrow.

2. At that same time, my neighbor (a 72 yr old man) comes riding up on a motorized bicycle that he built.

No, I was not drinking, this stuff happens when we sit on the porch all the time. At times, my son said I missed my calling as a psychiatrist, other times he calls me a dirt bag magnet. Just depends on the person who stops by...
3. We sit on the porch a LOT. My husby, who is in serious pain with his back (while the doctors discuss which procedure will make them the most money before developing a plan to ease said pain) enjoys this season and the weather. He is there now, propped up with many pillows, enjoying the weather.
CBW, you are truly blessed with many great and hilarious friends! Enjoy your visit!

hey long time no read. i moved from behind donks to moon like i said i was. so i haven't been online. recently found out my house is haunted, yay lol. Are you familiar with anything haunted on or near fitchetts wharf road? of course though you know mathews and gloucester they are full of ghost stories. I think its interesting and am trying to find out more on it. i have yet to see any extra ppl in my house however lol.

1. I had such a nice quiet day today. I layed in bed, ate doritoes, facedbooked, and caught up on tv shows online.

2. I think I will go nuts this summer with my kids all home. I have a feeling we will be at Haven beach a lot.

3. I had a toothache earlier and took a prescribed pain pill, needless to say i feel waaaayyy better but waaaaayyy sleepy lol.

I can only think of one thing: my bed.

1. Dewey Beach is where everyone around here goes when they GO TO THE BEACH. It's 2 1/2 hours from me!

2. I haven't been comin' round much and for that, I apologize. I miss coming here.

3. I'm having dinner with a friend tonight who just moved to a house by the water. It's beautiful there.

1. They are digging up my backyard, hopefully with good reason.

2. Packing, unpacking, repacking....still don't know what to bring to Ft. Worth or Florida.

2.a Bummed over the lack of relief for the Tennessee flood victims.

Have a blast with your college friends!

1. I hope your friend Lenja took a taxi to the beach.

2. I hope you have really, really defined abs from laughing all weekend.

3. I have a new (minimalist) shoe/pasture/cow story, just for you. This time there are photos.