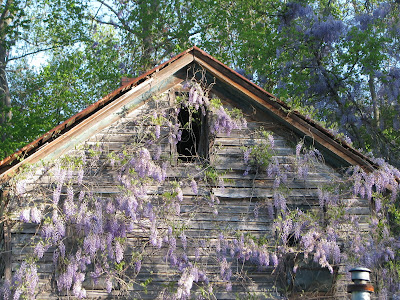 This lovely purple flower is a vine called wisteria. I've always loved that it tends to show up in the most unusual places, like draped across the remains of an old house, or high atop a stand of trees.

This particular shot is from the old building just past the state shed at Foster, before Trinity Episcopal Church on the right if you're leaving Mathews. There's a trailer (attached to that pipe-looking thing in the lower right corner) directly in front of the building which blocks its full view. I'd give anything to have a shot of this place with the wisteria in bloom minus that trailer.

Chesapeake Bay Mother actually knows a little something about the old building hiding underneath the flowers. She said it was a store, and she even knows the name of it. But I forgot what she said while she was telling me, there were way too many look! shiny things! distractions and interruptions.

Distractions and interruptions, plus procrastination and an inability to complete anything--if you toss in a few insect infestations that pretty much defines my life.

My BFF Wikipedia says this about wisteria:

Wisteria (also spelled Wistaria*) is a genus of flowering plants in the pea family, Fabaceae. It contains about ten species of woody climbing vines native to the eastern United States and the East Asian states of China, Korea, and Japan. Aquarists refer to the species Hygrophila difformis, in the family Acanthaceae, as Water Wisteria.

Wisteria vines climb by twining their stems either clockwise or counter-clockwise round any available support. ..The world's largest known Wisteria vine is located in Sierra Madre, California, measuring more than 1 acre in size and weighing 250 tons.

*We neither spell nor pronounce it "wistaria" around these parts.

Anyone from around here know anything about the old store hiding behind the trailer at the bend in the road near the state shed?

Have a fantastic weekend.
Posted by Chesapeake Bay Woman at 12:01 AM

Wisteria (the only way I know of to spell it) is a pretty flowering shrub, but it can become an invasive pain in the butt. If you don't train it to climb properly it can take over everything. And it needs a sturdy structure to climb on as it is very heavy. Is it Memorial Day Weekend yet?

Love wisteria. Managed to kill one at my place unintentionally through neglect. Very sad!

Good photo despite the limitations. Interested to hear the history behind the place.

I'm glad you posted about this. I'm seeing it everywhere around here. Lovely but yes, invasive. Thank heavens it's not kudzu.

I love it! But there are plenty of weeds I love, too. I always think of William Faulkner when I see it.

I have a little wisteria at my place~just cant get it to bloom.
Reminds me of wine...I mean grapes!
<><

I don't think I have ever seen Wisteria before! Can you believe that? I'm gonna pocket some seeds and daffodil bulbs when I come in July. Serioiusly.

In Central Park near 72-73 St there's an arbor with wisteria growing on it that is GORGEOUS .. and the other weekend when I was too lazy to walk and to impatient for the crosstown bus I took a taxi and for once there was no traffic and so we flew by the wisteria that's growing over a wall that keeps the crosstown traffic from infringing on Central Park at 66th St. I must go back and get a shot of it ...

WV punmet. I never a pun met that I didnt laugh at ..

DESPERATE Housewives, Bud, and yes they do live on Wisteria lane. (You may have been remembering Designing Women, an entirely different show from the '80s about a gaggle of women... which seems to be a theme.)

My in-laws built a pergola in their back yard and it is now completely covered with wisteria, to the point that it's kinda like a big shady tree. Very cool. Does it grow in the shade? Because we have lots of shade here...

WV schemmit. Sounds like a curse word. SCHEMMIT! WHO DRANK ALL MY WINE?

I love wisteria, too! We had one around and over the porch of little thatched cottage we owned, once (tiny bit of a cliché, there). We did have to take care that it didn't get onto the thatch and pull it off, though.

It grows here, too, and it's blooming right now. HEAVENLY scent. In fact, two weeks ago I took Sparky to a playground for an hour and kept smelling wisteria but couldn't see it. Finally looked UP: it had grown up into a cedar tree above the playground, 30-40 feet high, and actually stuck up taller than the tree itself!

Missed this the first time around. Glad you linked to it. Wisteria are one of my favorites and what a magnificent background that old building makes for it.