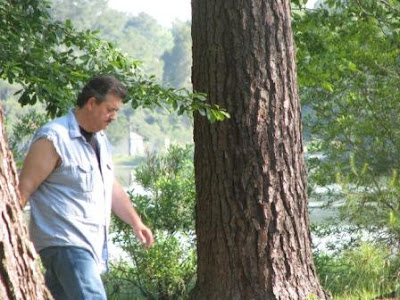 This is a shot of Mathews Mark walking back from an old cemetery the other day when he took me on a little photo tour. As a reminder to any available ladies who might be reading, Mathews Mark is an eligible bachelor - tall, dark, handsome, funny and sweet.

During our photo outing he showed me one of the old shot houses, where liquor was bought and sold illegally years ago when it was otherwise difficult to acquire.

This (below) is not an old still, nor is it an old shot house, but it is a chicken coop shack in the middle of the woods. It stands in back of a gorgeous old house that happens to be for sale. Regrettably I had the camera set to "video" mode--even though I don't know how to shoot videos on my camera--and the picture ended up a little wonky. (We can thank Daryl for introducing me to the word "wonky." It's one of my favorites.)

In spite of the inability to use the proper setting on my camera slant of the shack, no illegal liquor was used in the making of this photo: 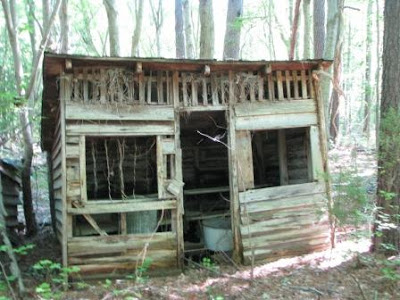 Below is what used to be called the Jolly Spot. "Jolly" was a ubiquitous term slapped on just about every underaged drinking establishment gathering place around for youth young adults looking to engage in some frivolity.

My personal favorite was the legendary Jolly Lobster, across the river, which had no official relationship whatsoever with the Jolly Spot but which relied on very similar products to ensure the jolliness of its patrons. As long as you had a pulse you could get in to that place, and even then blood flow to the brain appeared to be optional based on some of the characters I saw running around there. (I much preferred the Spectrum, and once or twice visited the Inn Place, but all that's for another day.)

Anyhow, the Jolly Spot was not just a shot house or a juke joint but a place where Chesapeake Bay Father played when he was the drummer for a legendary band known as the Dynatones. He said one night at a dance there, someone got stabbed. Thankfully the person was not seriously injured but I'm sure he was quite a bit wonky a far cry from jolly leavin' out of there. 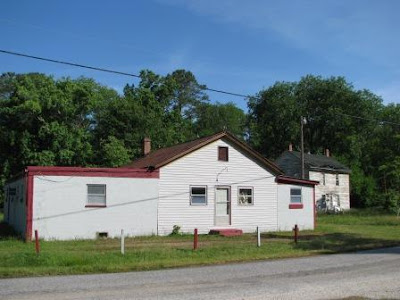 What I really wanted to share about this place is one of Mathews Mark's stories that he left in the comment section on an earlier post. It was downright hilarious, plus now I have the photo to go along with the story.

"...At one time we had over 10 local shot houses (bootleggers) in Mathews. They had names like Jolly Spot, East View Inn, West View Inn, R. Jordans and Wormlys to name a few. Mathews was a dry county on Sundays therefore you would go to one of the local shot houses for a drink . 1/2 pints of old crow, rum etc. were $4.00; a six pack was $4.00; and a chicken sandwich (a whole breast or leg slapped between 2 pieces of white bread was $1.00.

For those of us that were under age, as long as the owner knew your father and you had cash (cash being the main thing) you could get whatever you wanted. I spent many a Saturday night banging on the back door of one of these joints.

Owner: WHO IS IT?
Me: IT'S MARK.
Owner : MARK WHO, YOU A COP?
Me : NO, I AM WINFRED'S BOY.
Owner: WHO?
Me:WINFRED'S BOY!!!!
Owner: OH, YOU'RE NOT HERE TO COLLECT A CAR PAYMENT ARE YOU?
(CBW's Note: Mathews Mark's Daddy sold cars, and it was right about here that I cracked up laughing.)

Me: NO, I NEED A PINT AND A SIX PACK.
(Forgot to tell you we are hollerin' thru an old oak door that weighs about 400 pounds.)
Owner: DAMIT YOU AIN'T PAYED ME FOR THE LAST PINT YET!!!!!
Me: YES I DID!!!
Owner: OH, OK, JUST CHECKIN.' TELL YOUR DADDY I WILL BE UP THERE MONDAY WITH MY CAR PAYMENT...

As I was working on this post last night, I called next door to confirm with the Chesapeake Bay Parents that CB Father did in fact play at the Jolly Spot. After a brief conversation with my mother about the stabbing, she asked, "Why do you need to know all this?"

"Because I'm putting up a picture and a post about the Jolly Spot tomorrow," I replied.

OMG, I can just hear Chesapeake Bay Mother saying that!!

You'd think from this story that Matthews Mark lived during the Prohibition Era. I love that this happened not all that long ago.

I'm sure I'm not the only one who'd love to hear more about the Dynatones!

I love the idea of money being handed over and a disembodied hand clutching liquor shooting out from behind an old door....! My only experience with underage drinking (that I can remember) was secretly homebrewing beer in the airing cupboard (where all the clean bedlinen was stored). It would have remained undiscovered, and no doubt been delicious - had it not exploded.

I did get carded in the liquor store last weekend though. Really. CARDED! I should mention that I had all four children with me, was looking particularly haggard, and the boy serving was seriously under 21. I love him though.

OMG!!! Your mother is the funniest one of all....And don't get me started on The Jolly Spot thoughts going on in my head now....

Love the pictures and the story from Matthews Mark.

Here's to jolly spots of every variety!

I too can hear her voice saying that, she is so polite and yet she can throw down with the best of 'em (I am making that part up, Pookie);-)

Dynatones .. I bet your dad still has his sticks ... bet you didnt know I know drummer lingo ...

WV diumble .. another drum lingo word .. it actually refers to hitting the trap a certain way .. known only to drummers and band aids .. now ask me about being a band aid ...

Yes I have been in a few shot houses in my day, oh the stories I could tell!! Lets see there was the machine gun night, the fox horn adventure and car repossession just to name a few but CBW and I will have to take another trip to get some pictures of the other shot house's in order to tell these stories. My favorite bootleggers (and smartest) were Will Fat and Joshifine, they would fill the trunk up of there car with spirits and sit out side the bank on a friday afternoon (when everyone was cashing there pay check) and sell it right out of there trunk. There all ways was a line waiting, sometime the local sheriff would be the first in line. of course the closes ABC store back in the days was in Urbanna about 20 miles away. Free enterprise at work people!! MM

Mathews Mark, You tell your history in the most interesting way! Love your stories, can't wait for more.

CBW, loving the photo of the broken down shack...amazing light!

WV My great grandfather had a still up in the hills of KY, he retired from making shine at the ripe old age of 89.

Meg and Mrs. F. - The Dynatones are worthy of several blog posts, but first I'd have to interview CB Father and actually write things down because there are details and facts that I will otherwise forget and overlook. However, suffice to say they were very popular and traveled up and down the East Coast back in the day. They even cut a record. A few of the men are still around, they really were legendary.

Mrs.F. - Carded! (You have me laughing at describing yourself as haggard, because I envision you as anything but.) Isn't it nice to be carded? Sometimes it still happens to me. Well, it happened once.

MPM-She's something else. So are your jolly spot thoughts...

Trisha - You should hear the stories in person. PRiceless.

CF-You and MPM are on a roll.

Daryl - Very impressed at your knowledge. In fact, my father's CB handle was Drumsticks. He does still have some. The drums made a trip to the bottom of Queens Creek, but that's most definitely a story for another day.

Mathews Mark - don't hold back, please tell us these stories, there seems to be a particular interest in fox horns...

Deborah - 89? That's very impressive. Did he partake of the spirits which he helped brew? I'm always curious about these things - the secrets to a long life and all. My grandparents took nips every now and again, and my favorite grandmother kept Aqua Vit in her icebox. Made me "take a sip and hold it on your tooth" when I had a tooth ache. I do not remember spitting it out...

The work week is almost over and we're coming up on a holiday weekend. Hallelujah.

I so enjoy reading about Mathews. I do remember the Jolly Lobster on Jefferson well, though, but never went.

I don't usually do this, but I posted a story about bootleggers and revenuers from my grandmother's stories a while back.

I third or fourth the motions on the table about Dynatones stories and more Mathews Mark stories!

The WV code is now

I think I was just insulted by MicroSoft.