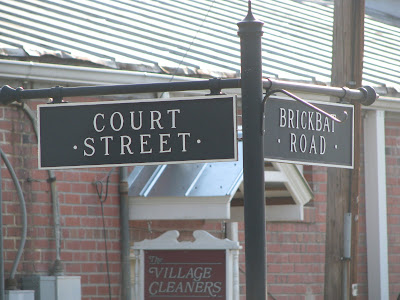 Above is a close-up of a court house street sign indicating the existence of a road known as Brickbat. The sign does say that, but in all my 495 45 years of life, I've never, ever, heard anyone say, "Turn right on Brickbat Road." (Or left for that matter.) It's just the road by Fleets. It has no name.

The word brickbat is not unfamiliar, however. My mother and grandmother both used the phrase "harder than a brickbat" often, and I grew up saying it myself.

A sentence using the word brickbat might go like this: "That cake that Chesapeake Bay Woman just baked is as hard as a brick bat. You'd break off an eye tooth biting into that thing. Quick! Throw it in the trash before she comes back."

I just assumed everyone knew what that meant. But then one day I left Mathews.

When I raced with flames at my heels trotted off to college in the early 1980s, the transition from sheltered Mathews County life to fraternity parties college life was challenging to say the least. My roommates all thought I was a freak of nature sort of like that boy who was raised by wolves a bit odd.

For example, if I said, "That poor woman is uglier than a mud fence," they just howled with laughter. "What is a mud fence?" my friend Iris would say.

Or they'd ask, "Why would you go to a court house to go shopping?"

Well, you can imagine how they reacted when I first said that something (probably a piece of bread or some science experiment in the icebox--another foreign word to them) was "harder than a brickbat."

Next came the inevitable question: What exactly is a brickbat, anyway? Anyone? Bueller?

So to solve this mystery I called upon my BFF Wikipedia, who directed me to an on-line dictionary, which said this about brickbats:

The term dates back to 1579? That's only a a couple of decades before the last time I cleaned out my icebox the Jamestown settlement.

But this still didn't sit well with me. Why would they call a street in the court house Brickbat Road?

Another website, oldhousejournal.com, brought me a little bit closer to a more likely answer. Speaking of historic buildings and how to properly replace and repair centuries-old brick, it referenced high-fired exterior brick and low-fired interior "bat" or "clinker" brick.

Since Brickbat Road hugs the historic court green, which is loaded with centuries-old buildings, I'm going to assume the road name has to do with the brickwork on those structures.

Has the one other reader from out of town anyone else ever heard the term brickbat?

Am I the only one who wants to do another Womanless Beauty Pageant, like next weekend?
Posted by Chesapeake Bay Woman at 12:01 AM

Never in my life have I heard it called Brickbat.. I have often thought of it when I saw it.. but never hear anyone say it.

I got a few more that I bet even YOU haven't heard..

That pocketbook she is toting is as big as Ippy...

She is as ugly as a bugannob!
Heard that one?? Yea me either but the WV of bugannob was just to funny not to use.

Never knew Brickbat Rd existed, but I have heard the term brickbat many times... and was made fun of for my Bawlmer accent when I moved out of MD... And the proper term for a pocketbook in Bawlmerese would be pockey-book.

Nope never heard of brickbat But dingbat...well thats another story. What time is the pagent this weekend?
<><

I have never heard the word Brickbad before, but I love that sign!

I'm with Noe Noe Girl....dingbat is as close as I come to a similar word, and believe me, it's a word I'm all too familiar with.

How about: "If you don't behave, I'm gonna snatch you bald-headed"?

Nope - never heard of brickbat even though I do know what a mud fence is and why someone would be uglier than one!

My girlfriend-now wife-was amazed when I would come back to college after a weekend at home and talk about "going to the courthouse" After a few times, she asked me what was I doing wrong that I had to keep going to court!
"Ugly as sin", "Dumb as a cluck" "Doesn't know their head from a hole in the ground","rough as pig iron" are just the few that I can remember now.
last week, a friend from NJ asked how I was feeling, and I replied "some better". She laughed and said, "Some better, you are such a country boy!"

of course, I use one I picked up from Foghorn Leghorn:
"That boy is about as sharp as a bowling ball!!"

Duh - I'm from Gloucester, so yes, I have used the term "harder than a brickbat", and "she could eat greens through chicken wire", "ugly as a mud duck", and in Gloucester, we used to go "over the river" to go shopping. Also "she's as big as bluegie"...

"Hard as a brickbat" was one of the favorite sayings of my maternal grandmother in western Kentucky. I smiled when I read your post, thanks!

This one's new to me. But I might start using it.

I assumed it ref'd to bat shit in a lump/clump that looked like a brick. Now here's one for you .. 'they're bat shit crazy' ... to me that sounds oxy-moronic

WV ineritat .. also a slur, if you call someone ineritat you are calling them crazy .. I know because Wikipedia tole me so .. no it didnt

I think rural places have this problem. I live off a road we call Road 9, but its old name is Wyo. No one knows why, and only the really old farts ever call it that (this includes me). Wyo IS on some of the signs, which I only just noticed recently -- kinda like this :"Wahl, lookie there!" Yeah, like that.

My Grandmother used to reference time as: before or after "she was beat over the head with the soot bag." I would die laughing, picturing her with...well, I guess it was a location joke. You had to be there.

When people say they were treated like a dog, I think "Well good for you" because I can't think of EVER treating a dog badly. My dogs get royal treatment and they rock.

Had trouble with step-son tonight, though....hoping everyone will land somewhere near reality tomorrow.....

Will live through it, though. Looking forward to this weekend and seeing Mamma.