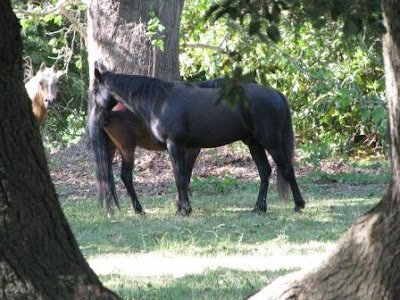 A while back I read a magazine article about an estate called Eyre Hall over on the Eastern Shore, which is on the other side of the bay from Mathews (about 10-15 miles as the crow flies, but about 2 hours as the car drives).

Every now and again I'll get over to the Eastern Shore and have seen the sign for the historic home, but I always thought it was private property. According to the article, the gardens are open to trespassers the general public. So yesterday, on my drive home from Delaware, I decided to stop in and take some photos.

After a long drive down a lane riddled with pot holes (odd, I remember thinking at the time, because the article made the place sound immaculately kept), I came to the entrance gate and was stunned to be greeted by the horses above, who evidently had broken out of their fence and were trotting across the driveway in front of me. There were five or six of them running wild all over the property.

There was nobody else around, so I pulled over on the grass and wandered around with my camera. The house itself was massive, and incredibly beautiful, but very, very much....in need of maintenance. The article said the house was normally closed, so I wasn't expecting that to be open, but I also wasn't expecting it to be so...in need of maintenance.

Perhaps they focus their resources on the gardens, I told myself.

Below is a shot from where I parked my car. Notice the holes in the windows and the shutters hanging off leaning against the house. 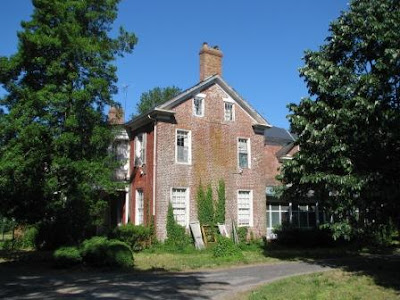 At this juncture most normal people might conclude that they were in the wrong place, but not Chesapeake Bay Woman, who is anything but normal kept wandering all over the grounds in search of this secret public garden.

This magnificent home on an enormous amount of land is on Cherrystone Creek, which leads out to the bay. I wandered all over admiring the views the waist-high grass and the charming outbuildings.

Still, I couldn't figure out where the gardens were. 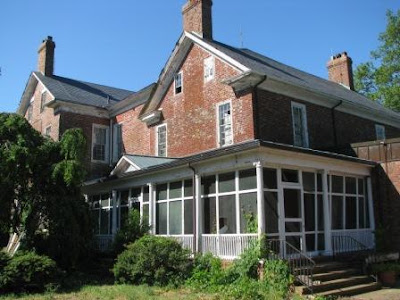 The more I wandered around, the more perplexed I became. Why would they publish a magazine article advertising magnificent gardens that were so difficult to find?

Perhaps the photo below can begin to convey the state of affairs at these "Open to the Public" formal gardens: 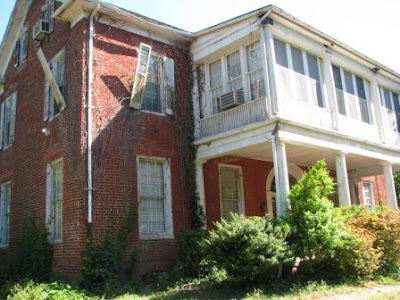 Finally, Chesapeake Bay Woman returned to her car with a camera full of delightful pictures of a beautiful, stately, waterfront manor whose windows were smudged with her noseprints. Her fingerprints may even be on the locked doorknob, who knows.

But alas she had no photographs of the much touted formal gardens.

Little did she know that the reason she had no garden photos is because this was the wrong house.

Dear Property Owners, I had no idea. I think swear the sign at the end of the road said Eyre Hall. But really, your place is gorgeous. You might want to make sure the horses stay out of the road, though, You never know when some frizzy-haired woman might drop by unannounced and unknowingly trespass startle them.

If I hadn't eventually found the real Eyre Hall, I'd still be wondering why I couldn't find the gardens at this first house.

The whole experience was surreal. Truly. 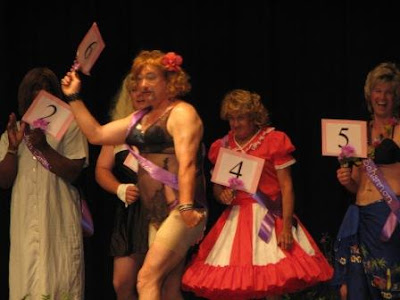 Stay tuned for photos from the real Eyre Hall and the gardens, which not only exist but are truly works of art, just like those biceps on Lady #6 above.

Eyre Hall .. I went immediately to Mr Rochester .. that house you shared today would easily pass for Thornfield Manor ... and may I say those biceps are stunning ...

WV thielzo .. those biceps were thielzo and I could barely look away

Too funny! I sort of got the idea you might be in the wrong place when I first heard of the horses wandering the place . . .

I WANT TO BUY THAT HOUSE.

Impossible to imagine something that grand going to seed. Why? How? Cna we have a fixer-upper party and make it the new BlogFest Headquarters?

Yes, YES! Lets! Or I'm going to have to tussle Meg for the house. Did you knock on the door? Was anyone home? If not, WHY NOT?

CBW, you can't, you just CAN'T leave it there! What does Mathews Mark have to say on the house - surely HE must know?

You have no idea how much I really, really NEEEED to see inside that house.

Daryl-I couldn't get that out of my head either, even though this wasn't even the right Eyre Hall.

Trisha-The horses really stunned me, because they ran right out in front of the car but then settled down right there in the yard...next to the house. The whole experience was very, very bizarre. These photos do not do the house justice - there's more and more of it that goes out towards the creek, narrow hallways and circular structures all attached. A very oddly shaped addition to this main part of the house.

Meg-It really is magnificent. It just needs a bit of TLC. The downstairs still had furniture in it, although I am not sure how I know that..maybe I dreamed it. Also, there were really cute little barn-type houses outside and the remains of a garden, all grown over in weeds. Still, I thought I was at the true Eyre Hall. Now I must find out what this place is/was.

Foolery-It would be perfect for a Blog Fest (although it's 3 hours away), but first we have to fix up the Islander and have our movie shoot there.

Mrs. F. - Nobody was home in the main house, and in fact several of the upstairs windows were knocked out, so I don't think anyone could actually live there until repair work is done. There was an outbuilding that had a satellite dish out front, so I am pretty sure there must have been someone there, just don't know who, I'd guess it was a renter, likely a farmhand? Don't know why the place is abandoned. It really is amazingly gorgeous.

Truth be told, this place was far more stately and regal than the real Eyre Hall, although that too was lovely.

Photos from the scene of the real Eyre Hall will go up tomorrow, although I'm not very happy with them. Editing takes away from the clarity of the original shot, but it's a necessary evil to get them to load quickly. I have so many good ones but can only load a few up at a time.

The Monday work day is finally over. Hallelujah.

And just where is Mathews Mark lately?

I just thought you would like to know that I came back to read your comments, CBW, and whilst perching precariously on the stool, a mouse just ran across my foot.

Country Girl-Mathews Mark is coming over to my house one night this week to help me with a few projects. He doesn't have much access to the internet here lately, but perhaps I can take some photos and conduct another interview.

Stunning house, but not as stunning as #6's biceps.

I am in repitypt of your bicep picture.

Hi, one of my best friends and I were told about the gardens and decided to check it out (we live in delaware). As did you, we also went to the "wrong eyre hall". We walked around the land (the house is really old kind of cool) From what we were told, back in the day, people couldnt afford to just buy a bigger and new house, so they just kept adding on room by room. It is quite a long house, a couple of doors were open along the rooms, of course we were curious but did not go in. So we started walking back to the car, and peeked into the windows. Walking back to thecar which wasnt very far from the house, we were startled from this big 18 wheeler truck that started comming down the dirt lane (we were probably about 18-19 years old, scared to death, thoughts of being murdered ran through my mind (haha) but a 38ish year old man got out of the truck and asked if we could be helped. We told the man that we were looking for the garden. The man chuckled and told us that we were on the "poor side" of the plantation. I believe he told us that the house belonged to his family and that he inherited it. Im not sure which plantation he was talking about us but hetold his that one of his late long ago relatives lost one of the properties in a poker game, got it back and lost it again. The man was very nice, we gave him some banana bread that we brought along with us. Overall it was really cool to be able to talk to someone about the property, my best friend and I are so glad we took that wrong turn. He told us where to find the garden so we went there next. Which is the most beautiful garden I have ever seen, we ended up having a picnic underneath the trees. :) if youd like to write back, my Email is Roxifoxemama@aol.com
Becky

Hello I live on the property in question and I would just like to answer some questions im sure you have. The property was traded for one in Virginia Beach in the 80s. My family lived there for years until the passing of my grandfather. From there it all went to hell the family split and the house was abandoned. However in the recent years things are getting better and maybe the house will get more attention in the future. :)