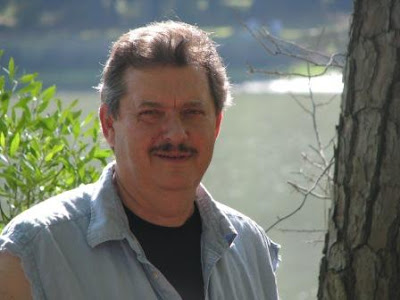 Once upon a Friday morning, Mathews Mark took me on a little drive around town in search of places to photograph. This was very exciting for me, because I'm not used to having a driver when I trespass am out taking pictures. Mark isn't just a driver, he's a walking encyclopedia of knowledge about this county.

He obtained permission for us to visit a house which dates back to the 1700s and has been in the same family for who knows how many years. After driving down a long, wooded lane, we were greeted by this chimney from the original kitchen, a separate structure from the main dwelling. The sun was shining just so through the trees.

While I spent about 10 minutes taking pictures of this beautiful chimney, Mathews Mark wondered why on Earth anyone would want a picture of a pile of bricks went to talk to the property owner who was out in the yard. 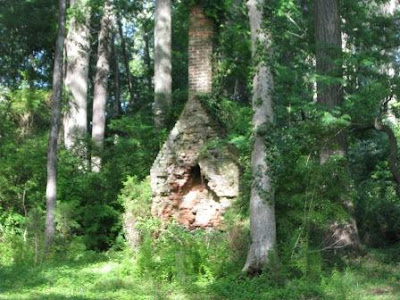 Although we had permission to be on the property, we did not receive 100% clearance to post photos of the house on the internet, so to be safe I'm just going to show you a few glimpses of the yard, including the one below of the lovely creek out back. This was taken as we were walking to the family cemetery, which contains the grave of a man who helped build Poplar Grove, another historic Mathews estate. 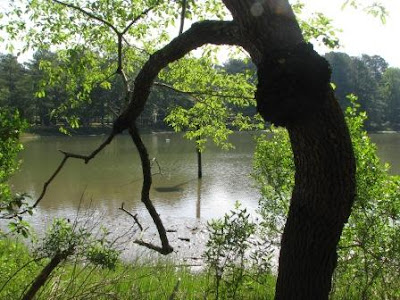 Next, we hopped in the truck and drove down below Port Haywood to a rather desolate lane that was loaded with old, abandoned houses, some of which were barely visible from the road.

One of these houses happened to be for sale, so we pulled in to take a look around.

Mathews Mark happens to know the owner of this property too, so between that and the house being up for sale technically we were still trespassing we felt reasonably sure it would be OK to snap a few photos.

Below is one of my favorites from a cute little closet bedroom upstairs. 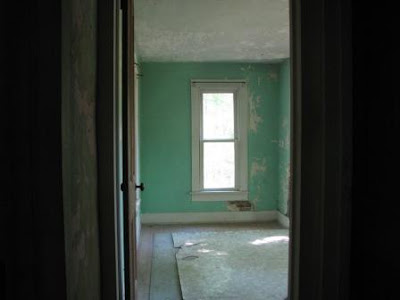 The house below represents yet another pit stop along that same desolate road. Unfortunately I couldn't get as close to this gorgeous house as I'd have liked because I was wearing flip flops. These aren't just any flip flops either. They're flip flops with a heel on them. Because I am just that much of a slave to fashion that I must wear heeled flip flops on a photo outing in the jungles woods of Mathews County. 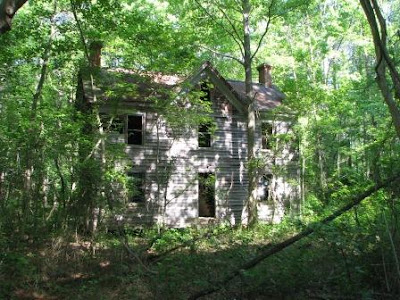 Jumping ditches and maneuvering through briars in flip flops with heels is just plain ridiculous. FYI.

Isn't this window precious? Is it even possible for a window to be precious? 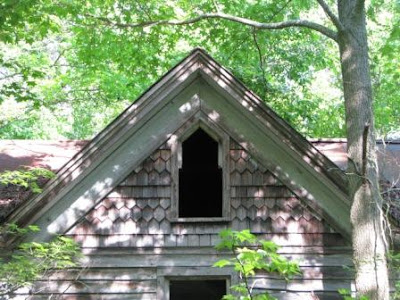 After our little jaunt around town we returned to my disaster house where I showed Mathews Mark several projects I'm hoping he can help me with.

All in all it was a very productive outing even if I was wearing improper footwear.

Thank you, Mathews Mark - I can't wait for the next excursion!

If anyone out there owns property in Mathews and would like it plastered all over the internet photographed and featured on this crazy little blog, just e-mail me at ChesapeakeBayWoman@gmail.com. Nothing would make me happier than to be able to legally trespass photograph your place and preserve it for posterity. Of particular interest to me are the older buildings and houses, but beggars can't be choosers I'm open to anything. Including brown and pink plaid Rocket Dog flip flops--with heels.

(They were on clearance and were so ugly cheap they were practically giving them away.)

I soooo envy you! I would give anything to go back down in that area and explore, except I'd get myself in trouble no doubt, climbing through windows and such. I can't help myself. As a psychic, I must touch everything. I love how nature just takes over the abandoned buildings.

Oh wow! I how MM takes us on a tour at blogfest. I think that house is haunted.

I am so going to go to jail... I don't have a driver with permission I just have two sons I drag along to use as some sort of excuse if I get caught lol..

Welcome back CBW I hope the Sking was good (some people will call it anything). Now I hope you got that out of your system so we can get back to work . I am working on or next outing as i write, think I will steal (borrow) some property reassessment signs, that way we can go anywhere and act like we know what we are doing. All though I do like click and runs kinda like smash and grabs. Makes your body feel all funny LOL. STOP taken pictures of me no wonder I can't get a date!!! I think we may need 2 tours for blogfest, a safe one were we are invited and one were we are not sure if we are invited (click and run), so sign up now people and if you ar daring make sure you wear your running shoes!! MM

Rocket Dog flip flops are the BEST! I have a pair that adds 3" to my height.

That chimney reminds me of a stone chimney we had on our farm property growing up. I don't remember if it was ever attached to a building - it probably was, when the house was built around the time of the Civil War. I'll ask my mom. I wish I had pictures of it.

I wanta see the flip flops!

I love those old kitchen chimneys! Each one has a story to tell;)

What wonderful photos .. love the composition with the angled branch competing for my eye with the lush greenery beyond ... and that window is just darling

Since I always seem to be shod in the wrong footware, I have no issue with heeled flipflops

If walls could talk..what an amazing adventure you and MM had! Your jungles are very lush this year, it will make for interesting tours later. Exploring (trespassing?) abandoned houses is too much fun!

Oh I always wear an ancient pair of crocs that have no tread left. I slide everywhere:)

I have no idea what you mean by improper footwear. Does not compute. Although I can say without hesitation that I would be wearing motorcycle boots to tramp around a southern forest floor, what with all the poisonous snakes y'all have.

I so enjoy reading your blog from way over in here in Yorktown! ;)

Autumnforest are you good with ghosts? I am told I have one in my house, would love to find out more on that.

I think a ghost tour would be awesome. As I mentioned to CBW we have those many stories about Old House Woods, and I am a firm believer in these things, but I have heard SO many different things about it. My kids drive me nuts with this stuff. I have only lived in Mathews county since last September and love all the old houses, mine is over 100 years old and I think these things are fascinating.

I am signing on for both tours and especially like the idea of the illegal one.
I will definitely have proper footwear. And CBW, your little flip flops with the heels totally cracked me up, you nut!!

AF-If you ever get back here, we are definitely going on a tour - Mathews Mark has the connections and the knowledge. All I have is the camera, but there are so many places you'd just love.

GJ-MM is definitely doing a tour for Blog Fest. Definitely.

Annie-Me too - wish you could see it in person. I'm still holding out hope you'll be able to make it to this side of the world for Blog Fest.

AM-YOU WALKED 26 MILES ON SATURDAY FOR A GOOD CAUSE. You are not going to jail.

MM-Yes, we do need to get back to work. Don't underestimate yourself - you are very photogenic. Your idea of 2 blog fest tours is excellent. You will have gobs of ladies fighting for a seat in the car...we might need to reserve a Bay Transit-mobile.

Meg-These are so ugly, but so comfortable (the flip flops, that is) and they were like $3.00 in the very back of a clearance bin at the equivalent of Rack Room Shoes. LOVE them (but they are ugly).

KD-Excellent idea. If I can remember I'll take a shot of them and put them up, but someone will have to remind me. You will not believe them, seriously. Brown and PINK plaid, high-heeled. Flip flops.

BHE- Way to go for finding Lucky a home, girl. I told my mother about that and she was thrilled.

daryl-Mathews Mark will definitely be able to get you back to these places for photos, and you won't be sorry. They are spectacular, flip flops or no.

deborah-the day was perfect for photos. No humidity, perfect sunlight. May tends to be the best month of the year for lush greenery, low humidity and minimal hazards--unless one is wearing high-heeled flip flops.

foolery-I have not one, but TWO pair of motorcycle boots if you need them while you're here. Bring your Dr. Scholls - they'll come in handy here. (Hold up well in mud. Cow pies too, so I am told.)

NNG-He is. You'll love talking to him.

Bethie-Thank you, that means a great deal given that most days I can't believe the stuff I toss up here and pass off for a blog. Thank you for reading and commenting.

Ashley-Those stories have been told for so many years that there has to be some grain of truth, no matter how far fetched it may seem. (That's my philosophy, anyway.) The last encounter I heard happened in the 1980s - haven't heard anything more recent. If you do, please write about it and let us know. Your 100 + year old house sounds wonderful.

CG-You would have an absolute field day with the tour he took me on. Seriously. (High-heeled flip flops are optional though they do tend to detract from the overall photographic experience.)

Thanks, all, for commenting. It means a lot after a long day.

thanks. its a nice old house. I'm still waiting for the ghost to appear I was told I have. He must be shy.