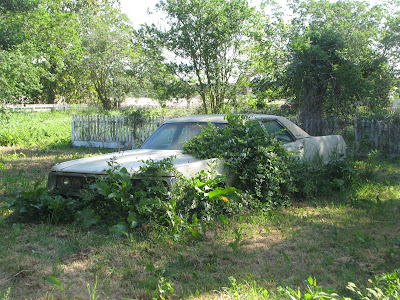 Anyway, today I'd like to dig deep into the vast wasteland recesses of my brain and talk about a very vivid memory that has haunted me for over 30 years: holding the flag for the school bus.

Back when phones were attached to the wall and you actually got up and walked to the television to change the channel (to one of the other two or three that came in via the rooftop aerial), I rode the bus to school.

Right next to Thomas Edison.

I had no problems with the whole bus riding concept; in fact I liked it, except for those hot, sweltering days when we drove by the pig farm on Ridge Road with the windows down because air conditioning had not been invented yet there was no such thing as air conditioned school buses. Or cars. Or houses.

Not only did the houses buses lack air conditioning, but they also managed to function without the yellow "slow down" lights that now change to the "you have to stop now" red lights.

But most of all they lacked the nice flashing red stop sign that now swings out on the driver's side alerting oncoming traffic to Listen. This is your one last chance and I will most definitely not say this again: STOP.

Back then, the flashing stop sign to alert oncoming traffic to first of all, there's no such thing as traffic in Mathews children crossing the road in front of a huge yellow school bus with flashing red lights consisted of this:

Let's send another child into the middle of the road. As a decoy. To hold a flag.

So, to review the thought process at the time--a time which included Magic 8 Balls Captain Kangaroo and Mr. Green Jeans:

1. It's dangerous for kids to cross the road in front of a bus with the occasional car oncoming traffic.

2. We must take extra steps to alert the drivers who can't see the big yellow school bus with flashing red lights (but no swinging stop sign).

3. Aha! Let's send another spindly kid out in the middle of the road to hold a flag, which consists of a sawed-off broomstick and a bandana.

4. At times there were lots of ping-pong balls raining down on poor exasperated Captain Kangaroo.

Who else had the privilege of holding the flag?
Posted by Chesapeake Bay Woman at 12:01 AM

Labels: Deep Thoughts, I Need a Vacation, Older than Dirt

I find the idea of holding a flag HYSTERICAL!

I came along some time after the swing arm stop signs, so the most dangerous bus riding events that ever occured to me was when Denise would go flying over the hump in front of Bill Johnson's house coming back from bavon beach heading towards Re's house.

Of course, us silly kids just loooved the idea of flying out of our seats! Sheesh!

I grew up outside of Baltimore. I would not have lived long if I had to hold a flag in any kind of traffic where I lived. I love Captain Kangaroo, and Mr. Greenjeans and the Moose

OH OH OH me me me...
I am starting to see a weird connection here... (yes I used to be skinny when I was little) skinny little blond girls holding flags to stop on coming traffic.. it was a conspiracy.. a conspiracy with BIG BIRD!!!
I loved Mr Green Jean by the way...

Sob, we didn't HAVE school buses. Or, actually, ANY kind of bus, where I loved. It was our own two feet, or nothing! Oh, sometimes Grandpapa would drop me off in the tractor if he was going that way!

Actually, looking back on it, I can't believe that at five years old, two of us would walk the nearly four miles to school and back each day. No adults, just us.

We didn't have the flag business. But our busses were actually buckboards pulled by a team of slow mules.

Holding the flag - I have never heard of that. Of course, I grew up in the city and didn't have to ride a bus until middle school.

What are these "buses" of which you speak? I rode a mule to school... 5 miles one way. Except in the winter, when I went via dogsled.

The memory of Captain Kangaroo and the ping pong balls made me snort.

Amazing how the definition of "safety" has changed.
No seat belts in my growing up car either.

WV: deadst: We were raised without seatbelts and stood up in the back seat when we were little. And we're not deadst yet!

In grade school, it was always the 'best' or 'smartest' students who got to go out into the middle of traffic on a very busy street when the light changed and hold the flag. There was one on each side of the street, and they got to wear a safety belt in bright orange! I never got to do that, because I always had to stay after because of wrongdoings of other classmates that always got me in trouble too. I never did nuttin'...Love Captain Kangaroo! We had Mr. Cartoon too..

We used to ride in the back of the pick-up truck too. Now its even against the law to haul your dogs there....

I've never been a skinny little third grader, except maybe when I was 18 months or so.

Mr. Green Jeans gave me the creeps. Mr. Moose was a smart aleck. I totally sided with Captain Sideburns.