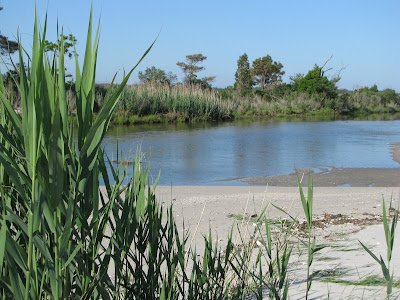 Not surprisingly, this photo has nothing to do with today's post except for the fact that this beach is in Mathews and so are whip-poor-wills.

Capable of flinging me instantly to the summer nights of my childhood, the whip-poor-will's call is my absolute favorite, with the red-winged blackbird's song not far behind.

The extent of my knowledge of the whip-poor-will is as follows:

-They're ground-dwelling birds heard primarily in summer;
-They begin their whip-poor-will call at dusk and go well into the night;
-They have lived in the woods across the creek from me since I was a child; of course not the exact same birds, just descendants of those birds, but this explanation really isn't necessary, is it?

To provide some more substantive details, I asked my BFF Wikipedia what she knew about whip-poor-wills, and she told me this:

-Their habitat is deciduous or mixed woods across southeastern Canada, eastern and southwestern United States, and Central America.
-They forage at night, catching insects in flight, and normally sleep during the day.
-They nest on the ground, in shaded locations among dead leaves, and usually lay two eggs at a time. The bird will commonly remain on the nest unless almost stepped upon.

The site goes on to say they are becoming rare in the U.S. possibly due to habitat destruction, predation by killer ants feral cats and dogs, and fiddler crabs poisoning by insecticides, but the causes remain elusive.

I've never seen a whip-poor-will but hope to hear them for many, many years to come.
Posted by Chesapeake Bay Woman at 12:01 AM

Have a great weekend CBW and cbkids!

Killdees would ask CBW if this is the correct name but she is partying with 4200 naked people. Anyway (forgive me its 5am and all I have is instant coffee) this little bird (since we are talking about birds) would take over our beaches a few weeks every summer. The killdee would lay its eggs on top of the sand at some of my favorite beaches Cow point, Haven and Newpoint just to name a few. During these weeks the bird would not let you on the beach it ( male and female) would dive bomb and chase you until we would leave, they were relentless. After the young hatched its was,Hey You can come back now we are sorry, You have any left overs for us? I love this bird it reminds me of Mrs Pookie protecting Her 4 cubs! Ok got to go dodge some lighting bolts and take a boat to Jackson Creek. Maybe later I can give you some dirt on CBW since She is partying and can't beat me up until next week!!! MM

Thanks, Annie. Hope you're feeeling better.

Mathews Mark - I'm still here until late morning, so I can still keep my eye on you. My mother called them killdees too, but I believe the spelling is killdeer? Could be wrong. Reminds me of my mother, too, except for different reasons. One summer she found a whole nest of babies with no mother around. (The mother was probably up the road getting some groceries or dinner or something, but CB Mother felt she needed to intervene.) She brought all the babies home and set up a pen in the back yard close to the house. They were ADORABLE babies. More than a few of them died, if I remember correctly, but they sure were cute baby birds.

Off to pack and then face Memorial Day traffic. Hope everyone has a great weekend.

CB Mother is like the Marlin Perkins of the Chesapeake Bay region. My neighbor across the street holds the title for our county, I think - she's always taking in strays... animals, and also, sometimes, humans.

I must suffer the indignity of working today when practically the whole rest of DC is off, but after that it's a frantic laundry-and-pack so we can head out early tomorrow for some reeee-lax-ation... I expect to be showering solo for the duration (though sharing the house with 4 other people besides my immediate family).

Meg-Working the Friday before Memorial Day should be outlawed, but you're probably better off leaving tomorrow morning early than any time today. I'm not smart enough to have learned that lesson yet.

Be safe and most of all have fun and relax.

CBW would you get the HELL to easternshore I'm not gona mess your blogg up Or maybe I will!!!

Will be outta here soon. Left all the packing to the last minute and can't find my list. We're off to a good start. expect the hurricane to make landfall any time now.

I am hoping they will serenade us at BlogFest ... click here

I don't think I've seen or heard a whip-poor-will - perhaps they don't come this far north? Oh actually, according to your BFF Wiki, it does. Perhaps I'm just astonishingly unobservant?

The sound of curlews makes me think of home, though...

killdeer is (are) an interesting bird with an unique call. They do like to dive boom you if they have youngins near by...but then so do Blue Jay. Hope you all are packed and on your way to relaxation!!